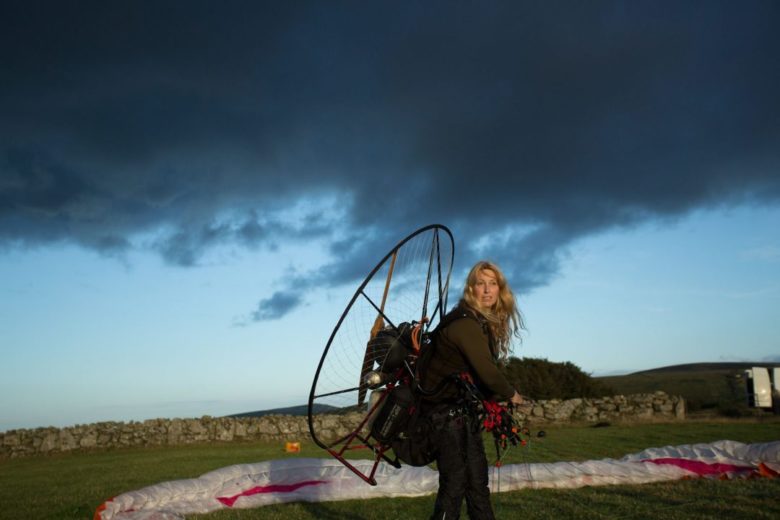 Storytelling lessons from a life of adventure

August 18, 2020
Storytelling, UncategorizedComments Off on Storytelling lessons from a life of adventure

The hunters of the remote Russian tundra must have been surprised to see Sacha Dench drop James-Bond-style out of the sky, with what essentially looked like a giant desk fan strapped to her back.

Sacha, CEO of Conservation without Borders, was on a mission to fly nearly 7,000 km across 11 countries by paramotor to help save the critically endangered Bewick’s swans.

Battling freezing temperatures, enduring injuries and treacherous conditions, Sacha flew along the birds’ migratory route from Arctic Russia to the UK. Dropping in to talk to communities across the route, she sought to understand and reveal, through stunning visual imagery, what was killing the swans and what we could do about it.

While not formally trained in comms, Sacha (AKA the human Swan) has a natural gift for storytelling which she’s used throughout her career to spotlight issues – from the plight of the shark to her latest campaign to save the Ospreys. We caught up with Sacha ahead of our annual Storyfest conference, where she was our keynote speaker, to ask about her unique storytelling techniques.

CC: In a previous life you were a biologist devoted to educating people about sharks. Can you tell us a bit more?

SD: A few people listened to what I had to say, but when I became an internationally recognised freediver, then the media listened, and I was able to really bring attention to the sharks’ cause.

CC: Is that when you realised that being part of the story could be helpful and were you ever worried your extraordinary human story could overshadow the swan’s story?

SD: Yes, the seed was planted. But it turns out, journalists can’t cover the adventure story without asking ‘why?’ And because I’m flying at the same height and altitude as the birds and suffering many of the same threats and challenges, I could talk about it with conviction from the swans’ point of view.

CC: What stories have you found change hearts and minds?

SD: People were interested in my being the human swan. The mystery of the swans’ disappearance and the incredible stories of their journey got people engaged. But the most effective stories for inspiring real-world action were the ones of people living along the flyway, who were doing things to help. For example, the volunteers across Europe counting swans on the same days in every country – made the nomadic reindeer breeders want to help. Or the Nenets [the Samoyedic ethnic group native to arctic Russia] offering to shift what and how they hunt – in already difficult circumstances – made polish fish farmers offer to leave ponds full for longer to be safe havens for birds.

CC: What did you learn about storytelling from this campaign?

SD: Have empathy for your audience, even if they are the problem. Try to get inside their head and imagine a scenario that might make them change their mind (it’s unlikely just giving facts will do that). Allow them to be the ‘hero’ in that scenario, rather than the one in the wrong forced to change. Also, check your assumptions about who these target audiences are. For example, we hadn’t ever imagined that the hunters in remote areas shooting swans, would include nine-year-old kids. In some remote communities (where permafrost limits agriculture) hunting is the contribution of kids to family survival- they shoot on their long walk to and from school.

CC: Can you tell us a bit more about making people ‘heroes’ in your campaign narrative?

SD: I kept saying – let’s give everyone the chance to be the good guys in the story. Let’s reframe the situation. For example, with hunters in the field, I would land dramatically from the sky on the paramotor to speak to them over cups of tea and discussions about motor and navigation, a love of the arctic etc. The ones that helped fix my paramotor, showed me where to find edible mushrooms, taught me tundra survival or arranged fuel drops, later became the official ‘champions of the swan’ and are carrying on the work.

CC: You said that scientists already knew many of the things that were killing the swans – so why did your campaign focus on this question?

SD: The scientists didn’t like the idea of posing this question, as it implied that after 30+ years of research they had failed. But I insisted on making this discovery a central premise of the campaign. By letting people have ownership of the mystery, allowing them to identify their part in the situation, would make it more engaging and have longer-term impact than arriving and saying ‘we know swans are being shot here and we need you to stop’ which would have got a lot more doors and minds closed to the issue.

So, I would show images of the threats we were aware of, but the public message was that we were ‘all on a mission to find out what was going wrong for swans’. Telling this story got people’s imaginations going, made it a shareable conversation and a discussion point within communities. We invited people to share stories and photos with us. Start with creativity and questionings and speak to people as equals – their local knowledge is as important as the research data in finding solutions.

“Be radical in your communications because the world needs bold thinking right now.”

CC: This campaign was very brave. Can you offer tips for pitching radical campaign ideas to Senior Management Teams?

SD: When I had the idea for Flight of the Swans I sat on it as I thought my reasonably conservative organisation wouldn’t take it up. But they did. And probably because a few key people I broached it with were brave enough to back me first. I learned that more people are up for radical thinking than you might expect. Be radical in your communications thinking because the world needs bold thinking right now. If your own ideas aren’t exciting enough, encourage or back others’ ideas that are.

CC: Can you tell us about your next campaign – what will you do differently this time?

SD: In our next campaign, I will be flying with the Osprey and meeting people along the route for BBC and global media. Looking at how to bring the osprey back, but also looking at our planet from a birds’-eye-view. This expedition is in the runup to the next Global Climate Change Conference in Glasgow and is the first in our ‘UN 2030 Global Challenge’ series of expeditions that span the globe and keep the world interested and motivated to turn the climate and biodiversity crises around in the next 10 years.

This time I will give people smaller cameras and more practice in how to make cameras invisible – in some communities the camera became the focus. I had better interactions, learnt more, made longer-term friends when I landed with just one small camera. Also, I will tell more stories of what people had agreed to do to help.