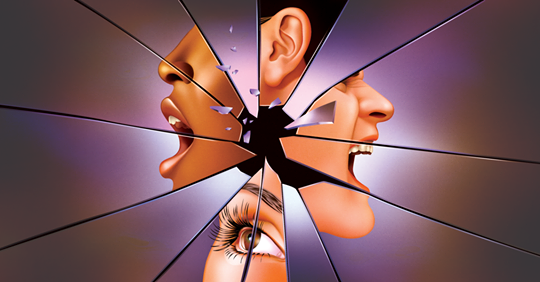 A Guide to Changing Someone Else’s Beliefs

March 14, 2019
messaging, TheoryComments Off on A Guide to Changing Someone Else’s Beliefs
Listen to this story

Changing minds is hard to do: When our most dearly held opinions — things like political convictions, religious beliefs, morals, and core principles — are challenged, our brains put up one hell of a fight to protect them. Research has shown that when deeply held beliefs are called into question, the amygdala, a part of the brain that processes emotions, kicks into high gear as if we were encountering danger, leaving us in no mood to consider a difference of opinion.

And yet people convincing other people to believe things is what makes the world go around. Whether you’re selling a product, angling for a promotion, or running for office, the odds are good that your job requires you to influence and persuade people in some capacity. And outside of work, many of our social relationships are built on shared beliefs: We often get along best with people who agree with us.

The same science that helps us understand how beliefs are formed can actually help us get better at changing them. The first thing you need to understand about persuasion, explains Robert Cialdini, author of Influence: The Psychology of Persuasion, is that what you’re saying matters far less than who you are.

“Most of us think that the message and the merits of the message are the things that will convince people,” Cialdini says. “That’s usually not the case. Very often, it’s the relationship we have to the messenger. It’s not always about the argument, but about the delivery.”

This may seem like a no-brainer, but it’s much easier to influence people who are already close to you. This is in part because their brains are already primed for the right chemical reaction. Neuroscientist Paul Zak has spent most of his career researching oxytocin, a neurotransmitter associated with love, happiness, bonding, and — as Zak’s research has demonstrated — trust.

“It makes you more sensitive to social information,” he says. “I can more effectively persuade you if I flood your brain with oxytocin.” If you’re trying to convince a friend, family member, or partner of something, your odds are better if you soften them up with reminders of your closeness: Warm temperatures, eye contact, and touch all prompt the release of oxytocin. “Give them love, give them affection,” Zak says. “Tell them, ‘I really want to help you understand this thing.’”

Of course, you can’t just go around hugging everyone you need to sway to your point of view. But even for acquaintances and other loose ties, you can still use psychology to your advantage. Cialdini says that understanding a few universal principles of human behavior can help make you a master influencer.

“People want to give back to those who’ve given to them,” Cialdini says. “That’s the principle of reciprocity.” A 2002 study via Cornell University found that when restaurant servers brought customers a mint or candy along with their bill, tips went up almost three percent. If they added an additional mint to the tray, tips went up even more.

“If the server puts one mint on the tray and then turns and says, ‘You know what, you’ve been such great guests, here’s another mint,’ tips go up 20 percent,” Cialdini says. “The key is personalizing what you give; that can change people dramatically.”

“You can make the case that if an idea is unique, people will want it.”

But coaxing open someone’s mind isn’t as easy as just buying their affection. Instead, make them feel listened to. Pay attention to your friends and coworkers, and give gifts that are simple but meaningful. Learning someone’s coffee order and surprising them with a cup, for example, could have a much bigger effect on their willingness to listen than giving them a Starbucks gift card.

Another strategy: Use the rules of supply and demand to your advantage. The rarer something is, the more people want it, and the more they’re willing to pay for it. This same principle, Cialdini says, can apply to belief and influence.

“To some extent, you can make the case that if an idea is unique, people will want it,” he says. This might even offer an explanation for why some people are more susceptible to fake news or conspiracy theories or why they’ll cling to information that’s been resoundingly disproven. “They’re now in possession of a piece of information or knowledge that not everyone holds, and it sets them apart,” he says. “It explains why we’ll believe ridiculous things.”

The perception of scarcity becomes a more powerful incentive for people to get on board with your ideas “if you can make the case that unless we move now, the benefits of this cause or approach will be lost to us,” Cialdini says. “‘We have a limited time in which to elect people who are favorable to our side; we’ve got to move’ — that spurs people into action.”

If you’ve read this far, you’ve likely already experienced another principle of persuasion psychology: authority. Cialdini and Zak are published authors with advanced degrees — experts in their fields — so you’re likely more willing to accept what they have to say about the science of influence at face value.

“When people are given an expert’s position on, for instance, difficult economic problems, the areas of the brain associated with critical evaluation flatline,” Cialdini says. “If an expert says it, we don’t have to think about it.”

If you’re trying to influence someone’s opinion on a topic that you’re well-educated in, that’s a good time to brag about your resume. “Mention your background or experience or degrees,” Cialdini says. “If you can get people to believe you’re an expert and get them to see you as trustworthy, no one can beat you.”

That trustworthy part is key: You can be the most educated, qualified person around, but it won’t matter if people don’t trust you. To that end, Cialdini recommends a shortcut that may seem counterintuitive: “We’re trained to begin with our most compelling arguments — strongest ones first,” he says. “To establish trust and credibility, you should begin by describing the weaknesses in your case.” People might be taken aback, he explains, but they’ll like that you’re being straight with them. “Then, you show how the strengths overwhelm the weaknesses, and you win the day.”

You can also use a person’s history to your advantage — after all, no one is more persuasive to us than, well, us. Tailor your pitch to match things they’ve done or said in the past. (That might mean doing a bit of digging on a LinkedIn or Twitter feed — just don’t bring it up to them in a way that seems creepy or off-putting.)

“Align your recommendation with a statement of theirs,” Cialdini says. “Like, ‘I really appreciated what you wrote about equality and fairness. That’s why I’m asking you to move in the direction of greater diversity.” No one wants to be seen as going back on their word, so this tactic works especially well on social media. “The more public it is,” Cialdini says, “the more powerful that commitment to consistency.”

But one of the best strategies for changing someone’s beliefs is also the simplest: We’re far more easily influenced by people we like or have things in common with. Again, this is where an internet search can be your friend: If you find commonalities or shared hobbies with someone, it can be helpful to mention them before you launch into a sales pitch. Even if it’s as basic as rooting for the same sports team or binging the same Netflix show, you’ve established a common bond.

You can also try genuine compliments. “Not only do people like those who are like them; they like people who like them and say so,” Cialdini says. “If it’s a phony compliment, people will see though it, so wait until you find something you really like about what a person said in a meeting, a position they took that you agree with, or a good job they did on a task and then tell them so.”

You don’t need to employ every one of these tactics every time you’re working to persuade someone. Sometimes, just one strategy fits the bill; other times, a situation might require a combination of persuasion methods. But the most important thing to remember when it comes to changing beliefs is that the facts are sort of secondary: The human element is what matters. “The mistake people make is using logic. For normal humans, data and evidence isn’t the way to change a mind,” Zak says. “We’re social creatures, and we’re fascinated by other humans. It’s not about the story. It’s about the storyteller.”

Kate is a freelance journalist who’s been published by Popular Science, The Washington Post, USA Today, Slate, and many more. Read more at bykatemorgan.com.