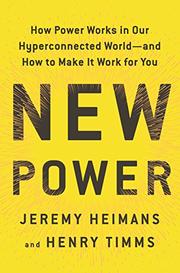 March 13, 2019
TheoryComments Off on Old and New Power – Distributed action in modern times

Heimans, CEO of Purpose, which “builds and supports social movements,” and Timms, executive director of the 92nd Street Y, debut with an illuminating discussion of how technology and our rising expectations have enabled us to achieve our goals on a greater-than-ever scale. Old power, write the authors, depends on expertise and what you own or control, as in Fortune 500 companies. New power relies on connectivity and the desire to participate and collaborate, as in Uber, Airbnb, and Facebook (as well as protest movements like Occupy and Black Lives Matter and terrorist groups like the Islamic State).

Using online engagement, crowdsourcing, and peer-to-peer approaches, new power offers a fresh means of participation and a “heightened sense of agency” for all involved. The authors detail how power—old, new, or a combination of both—is now exercised by people, companies, and movements to quietly shape our lives in impactful ways.

Old power has the top-down voice of a corporate press release; new power soars through “meme drops,” which “spread sideways, coming most alive when remixed, shared, and customized by peer communities”—e.g., in the ice bucket challenge and Pepe the Frog.

Actionnable: the idea needs to have a clear call to action, something that can be done by anyone.

Connected: the action needs to connect you to others

Extensible: people need to be able to customize the action, to make it fit their own formet

It is often in this last dimension that most so-called “participatory” actions fail.

The impact of these thoughts on SOGI campaigning is immense:

In a world where people distrust institutionalised power more and more, established organisations and movements find it increasingly difficult to mobilise. Most major recent mobilisations, from #MeeToo to the Climate marches have been generated outside of movements.

Moreover, basic messenger theory tells us that people don’t trust sources which they feel have a vested interest in an issue. This bias to put more trust in close social circles has increased lately, with social apps like Yelp even specialising in channelling opinions. So mobilisation from “within” is increasingly un-strategic.

So it seems that organisations would have everything to gain from moving away from models of old power, and many organisations have

Yet, most of LGBTI+ organisations rely on a MODEL of new power but still remain within the VALUES of old power. In other words, organisations want everybody to participate but cling on to their monopoly on the content. The increasing complexity of the issues of sexuality and gender doesn’t make distributing the discourse easier: in a post-gender, non-binary, intersectional world, the gap between “politellectuals” (those with the intellectual capacity to draw the political concepts) and the “crowd” deepens, making meaningful participation more difficult across the divide.

« Fake news, real damage – How fake news been has used against LGBT people
A Guide to Changing Someone Else’s Beliefs »