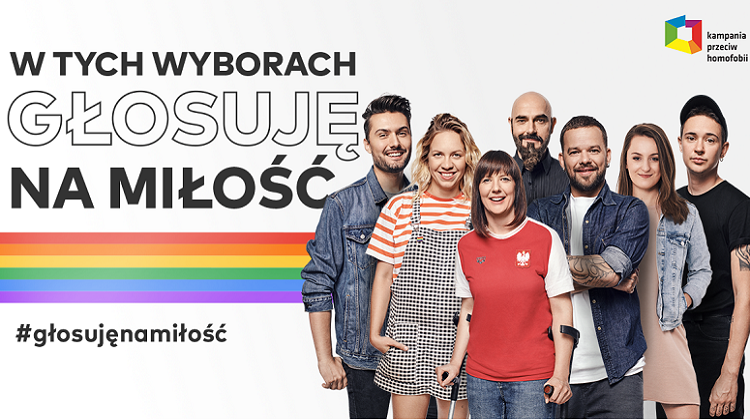 “Vote for …ME”: How a Polish campaign avoided the usual danger zone of national elections

Polish elections are normally a difficult time for the LGBTI movement, as conservatives whip up a moral panic around sexuality and gender to galvanise their voters.

This was not going to intimidate the national Polish LGBTI organization, KPH, which was determined to use the 2019 Parliamentary elections to change the narrative.

Magdalena Swider of KPH takes us behind the scenes of their campaign.

Magdalena, you say elections are normally a danger zone for the LGBTI movement, right?

Throughout the years, we have always been instrumentalised. Normally in a negative way but also lately for progressives to show their commitment to democracy and the independence of the judiciary, both of which are heated debates in Poland. While this positive association might be an asset, it also drags us, without our consent, into the political arena so this time we were determined not to let it happen behind our backs but rather to take front stage.

So you started your own electoral campaign

We clearly wanted to mobilise both the LGBTI people themselves, and our already supportive allies. A campaign around elections is not a good opportunity to change the hearts and minds of the “moveable middle”. The short timeframe does not allow this. So, it was more about mobilising our supporters and allies. We had an intuition – that was later confirmed in focus groups – that even though allies care about problems of LGBT people, they don’t necessarily take minority rights into consideration when making voting decisions. They have to be reminded that this is an important topic during the election period. The first step was, of course, to hear them out and see what kind of action and messages would work for them.

This is indeed an essential step which is mostly skipped by organisations for lack of time, resources, or awareness. How did you proceed?

A first step was to gather a group of allies who we already knew. We organized a brainstorming session and came up with a very wide range of possible narratives. These ranged from “2 million people suffer due to exclusion – you can change their fate” to “By ignoring exclusion, you will not make it disappear” or “In the eyes of the law, homosexual couples are strangers to each other. Because of that, they cannot bury their partner” or “What if it was you who needed permission from 20 million people to get married?”. We gathered a list of about 60 such frames (which we can send upon request to anyone who is interested).

We also asked this group about potential campaign activities they would suggest and we collected very valuable ideas. Often organisations don’t tap into the huge potential of creativity and imagination of their supporters and rely too much on themselves to come up with ideas.

And then Focus Groups?

Yes, the second step was to organize Focus Group discussions to explore further.

Potential participants were presented via an online questionnaire administered by IPSOS with 14 statements, five of which intended to check their attitudes toward the elections and towards the LGBT community. The remaining statements were only there to conceal the intentions of the survey, so that respondents would be as “natural” as possible. Respondents were recruited if they responded to the five statements in the following ways:

We organised a separate Focus Group of LGBT people and tried hard to ensure diversity by selecting people from different geographic locations. Unfortunately, we did not manage to secure any Trans participants, although we collaborated with the national Trans organisation. We need to keep working on empowering the Trans community to take up their rightful place in these processes.

What were the outcomes of the Focus Group Discussions?

Fascinating! Some of the outcomes are quite confidential because they really are crucial to our current message framing so we can’t share everything here. We have a full report available to LGBTI organisations upon request, but we can share some of the outcomes here as we imagine that quite a few campaigners who do this kind of consultations will be interested. For example the focus groups surfaced revealed that:

So when you eventually had your frame, what was the action strategy?

The objective of the campaign was to mobilise both LGBT people and non-LGBT allies to:

We commissioned a creative agency to come up with the action format and slogan. The agency proposed the idea of creating a mock electoral campaign with LGBT people on the posters instead of politicians, and an election rally around LGBT issues, during which LGBT people and allies could edit campaign posters with their own photo, name and slogan then circulate them within their network. This was altogether engaging, personalised and fun: three key dimensions of good mobilisation campaigns. We launched the campaign one month before the election but kept this “poster” action for the two final weeks, when mobilisation was at its peak.

And how did the outreach to politicians work?

We partnered up with another organisation that monitors the views of candidates before each election. They usually send out a survey to candidates asking 40 or more questions. The survey included two issues that we suggested: 1) whether candidates support civil partnerships and/or marriage equality, 2) whether the Criminal Code should include protection from homophobic and transphobic hate crimes. We set up a website where people could check the candidates’ answers and if there was no response, they were provided with contact details of the candidate and could ask them to respond to the questionnaire.  The site also provided template messages and advice on how to address politicians. People are not familiar with this kind of action, so giving guidelines was absolutely essential.

One of the drawbacks was that people who contacted their candidates had to go back to the website to check whether the candidates had responded, and what they had said. It is not possible for us to know how many people actually contacted their politicians because we also reached out directly ourselves to them, so when we got an answer to our survey we didn’t know what had triggered it.

Now the million-dollar question for all campaigners: How did you reach out to your target group?

Obviously there were our traditional channels, but the added value of working with an agency was that they were clearly tasked with finding new audiences, particularly non—LGBT allies. They did this through micro-marketing via Facebook, Instagram, Youtube, Google ads, and other online tools. They achieved a lot of visibility and our campaign was popping up everywhere, but this generated a wave of hate speech, which the agency did not moderate straight away and which stayed up for far too long.

Certainly not! We definitely wanted this campaign to also resonate in the real world. We secured some pro-bono billboard spaces (granted: not top-notch places, given the electoral period) in 8 different cities. We took pictures of these billboards and disseminated them online to create offline-online interactions. There were citi digitals in 63 locations in 4 major Polish cities and we had 3,100 posters in smaller cities around Poland. We set up press walls in 7 clubs in different locations, where people could take a selfie against the background of a campaign poster. We also sent campaign posters and leaflets to 30 local LGBT organisations and groups for distribution in their towns.

And then there was the political rally which I told you about earlier, which was a great community moment. 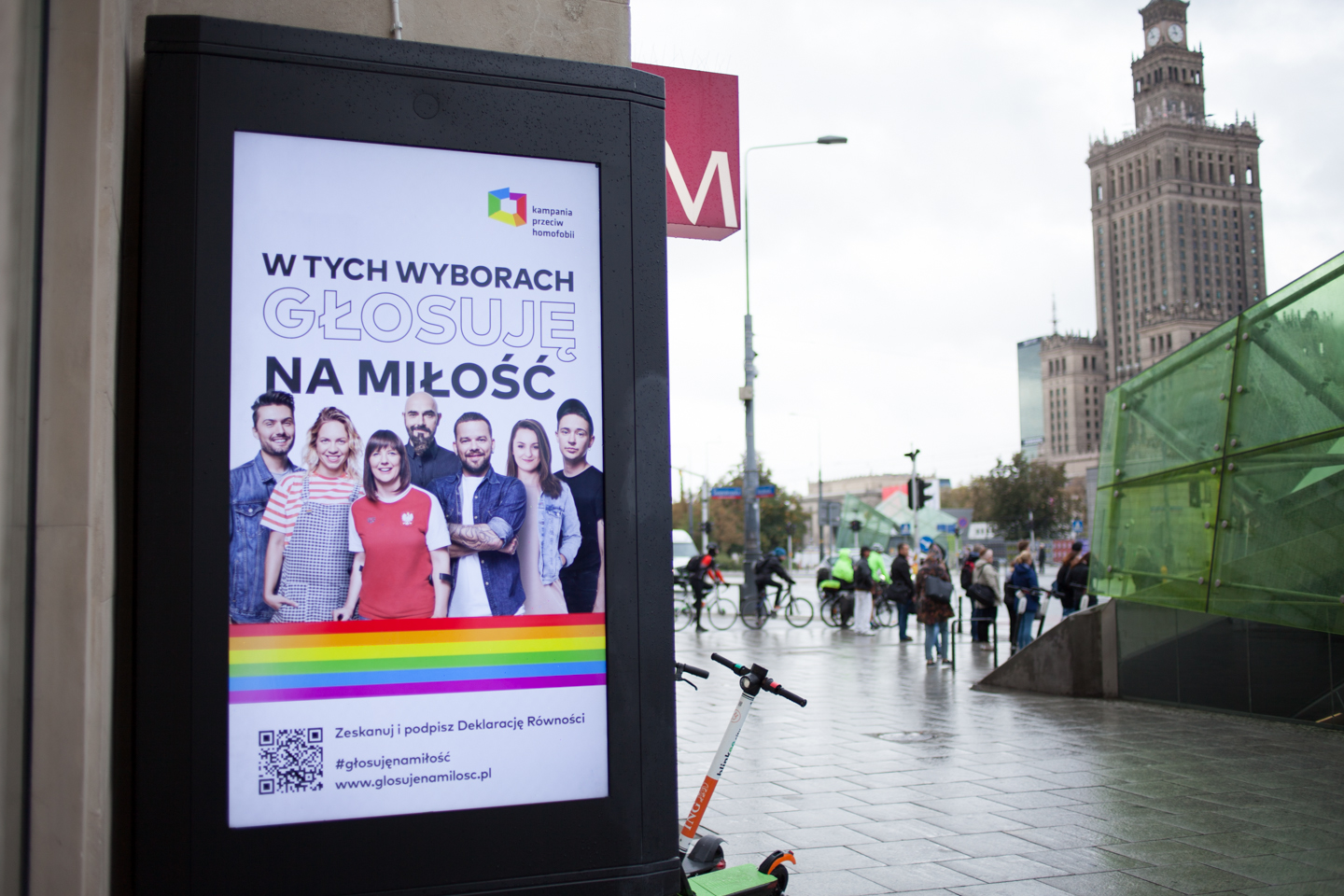 What particular challenges did you face?

The main challenge was that as we could only pay the agency very little money, we had to go along with their own motivation, which was stronger for some parts of the campaign than others. For example, the agency didn’t believe that supporters would contact their candidates so they didn’t engage with this action and so, within only 4 weeks; we had to find in-house resources to develop the whole technical setup. This resulted in incredible stress.

For the same reason, we had to reduce the number political rallies to only one in Warsaw, when we had initially planned several. We had thought about organising a bus to tour the country but this too had to be dropped.

As for the type of action, the challenge was that most actions required the sharing of personal data, which is still difficult for people in post-Soviet countries, especially as our current political regime is unreliable regarding data protection. Electoral power resides in the capacity of people to be vocal about their alignment, so it would have been difficult to create a mechanism where respondents could mark their involvement in an anonymous or confidential manner.

First, as regards outputs, we were quite happy to register 20,794 pledges on the site. This is twice what we normally would expect for this type of action, so 50% of it probably  resulted from the specific micro-marketing of the agency.

One interesting new initiative was to ask our supporters what they thought of the campaign. We received about 2000 responses, which is quite incredible, and most of them were really positive. The people who commented are the core supporters, those who would certainly not be shy to criticise, so we take this as a very positive indicator. It will also be valuable for future campaigns to know that the campaign was mainly appreciated because of its positive tone, and because it did not favour any particular party. So while it is risky to put yourself on the line, we would really encourage other organisations to gather this kind of feedback, otherwise we’re really only self-evaluating.

Lastly, one of the great successes was that our Facebook group of mobilised activists, which we had started to build up for the EU election campaign earlier this year, almost doubled, from 600 to 1,000. This is a very valuable reservoir of “contributing” audiences, as we call them in campaign jargon: people who can be called on to participate actively in a campaign. Maybe some of them will even become volunteers one day.

So while elections are always daunting because levels of attacks and hate speech rocket, they can also become terrific movements to galvanise your existing supporters, gain new ones, and even, why not?, change some hearts and minds in the process.