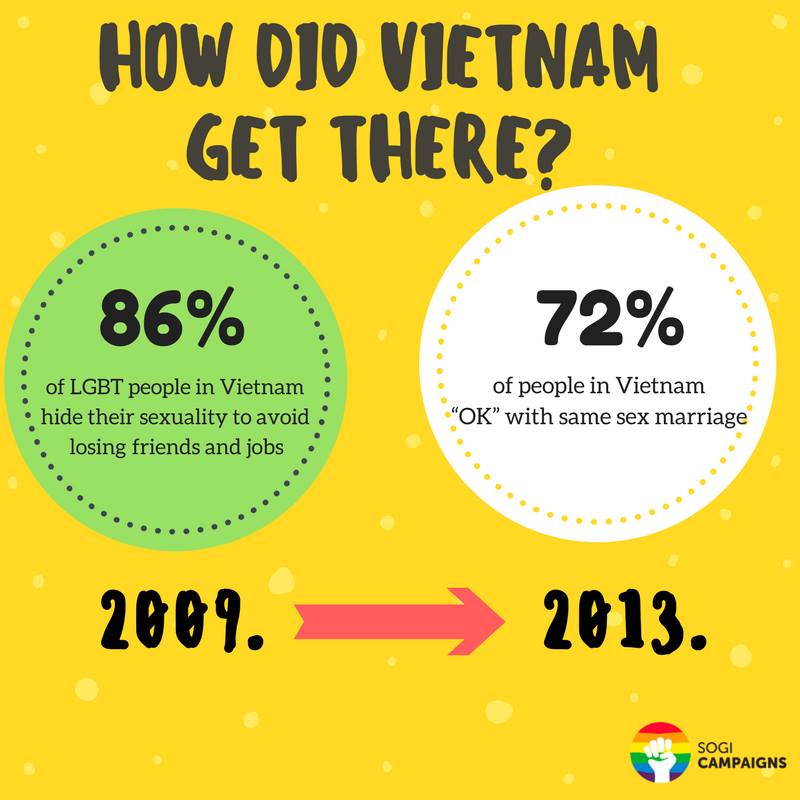 Vietnam is heading to be one of first Asian nations to allow Marriage Equality. How did it get there?

An interview with organisations ICS and iSEE

What was the context of the “I DO” campaign ?

South East Asia might be seen by some as a relatively progressive environment for sexual and gender minorities but this is far from being the case.

In Vietnam, contemporary political regimes did little to address the strongly ingrained stigma against sexual and gender minorities. On the contrary, In 2002 authorties ran a media campaign which considered that homosexuality is a ‘social evil’, a ‘disease to immorality’ and ‘bad behaviour’, even called for the arrest of homosexual couples. Because of this discrimination, in 2009 86% of LGBT people felt compelled to hide their sexuality at work to avoid losing friends and jobs and 90% felt that society had a negative view of homosexuality.

In May 2012, a same-sex couple in Ha Tien held a traditional, public wedding at their home but were stopped by local authorities. The event was reported widely on Vietnamese media and started a heated debate on the issue.

Two months later, the Vietnamese Justice Minister, Ha Hung Cuong, announced that the Government was considering legalising same-sex marriage, stating that “in order to protect individual freedoms, same-sex marriage should be allowed.” The subject was expected to be debated at the National Assembly in spring 2013. However, in February 2013, the Ministry of Justice requested that the National Assembly avoid action until 2014.

In June 2013, the Ministry of Justice submitted a bill that removes the ban on same-sex marriage from the Marriage and Family Law and provides some rights for cohabiting same-sex couples.

In May 2013, ICS and PFLAG had participated in the International Legal Consultant Conference in Ha Noi – this was the first time same-sex legal issue were publicly discussed between the LGBT community and the Ministry of Justice. Later this year, in September, ICS and iSEE participated in the Public Consultation for Family & Marriage Law in Ha Noi.

In this context, Civil Society organisations working for sexual and gender minorities considered that the time was ripe to campaign to change public attitudes on this issue, and generate large social support, with the idea that this would influence the Parliamentary debates.

So the ”I DO” campaign was launched in September 2013 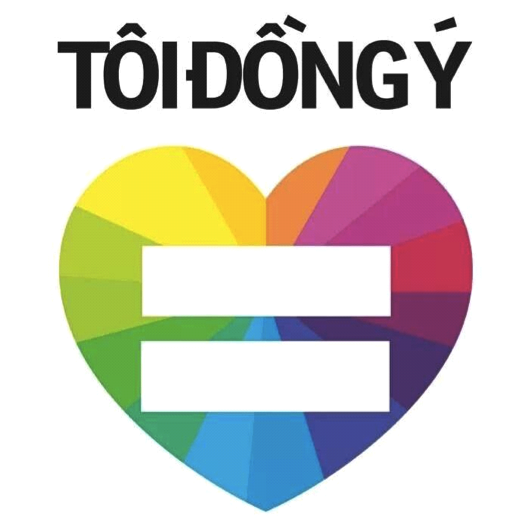 Who were the organisations involved in the campaign?

We must insist on the fact that this campaign was lead by a coalition of Civil Society organisations working for sexual and gender minorities, including PFLAG, iSEE and ICS.

Since then, we did many public activities. For example in May, 2015, to celebrate the International Day Against Homophobia, Transphobia and Biphobia (IDAHOT), iSEE organised BUBU (Be Unique-Be U) Town event attracting more than 4000 young people in Hanoi and 1000 people in Ho Chi Minh City. Through these events, LGBT and non-LGBT people can dialogue easily together through joining talk shows, dancing flashmobs and performing music. These festivities were held from then on every year.

ICS was set up by iSEE to be a more community-focused organisation. ICS works directly with sexual and gender minorities communities on the ground, making sure everyone is included as much as possible. ICS also aims at having a stronger presence in the South, whereas iSEE is more active in the North.

For ICS, the main strategy is to get the communities to engage in campaigning, so local organisations could really own the campaign and develop their own activities.

To make sure there is enough coherence, ICS brings the community-based organisations together every year to jointly develop the strategies. ICS also provides training on specific aspects, like media communications.

How was the campaign strategy developed ?

The strategy was developed on the go. The target was society at large but more specifically young people. The message was focused on finding universal frames, so it wasn’t about same-sex marriage but “equal marriage”. It was aimed at being inclusive “family is about love, not gender”.

The tone was non-confrontational, as in Vietnam confrontation is not culturally acceptable. There wasn’t any public protest or march.

What were the main values that the campaign chose to work on?

Freedom is not an easy value to work around, as it can easily trigger the frame that LGBT people are promiscuous and don’t want to conform to social norms, but given the fact that the issue is quite new to the public, LGBT organisations have more capacity to push the limits and reframe notions like Freedom in society.

Whom did you choose as the messengers of the campaign

I DO campaign uses a variety of messengers to deliver information by being engaging (attractiveness, likability), credible (trustworthiness, expertise), and relevant to the audience (similarity, familiarity).

Given that we targeted young people, celebrity influencers were an important part of the strategy.

But we also relied heavily on the “viral” effect of support via social media, so we developed a call to action, which was to turn one’s Facebook avatar into a heart, the brand of the campaign. People were invited to customise and create their own version of it, much like the Human Rights Campaign in the US encouraged people to create their customised version of the famous “=” brand. 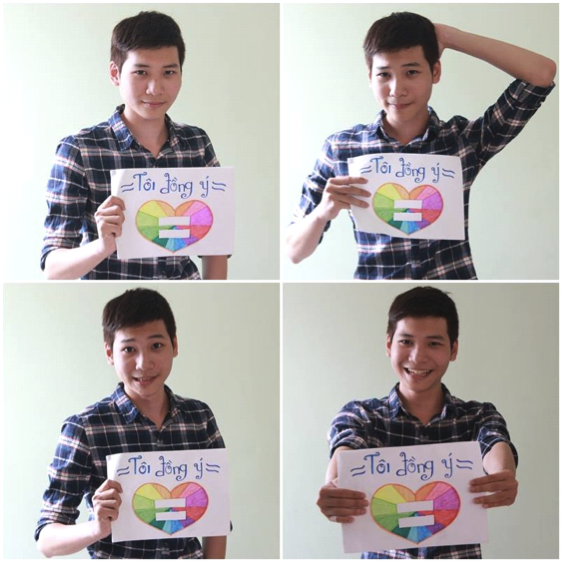 This still worked back then, as social media was small and these “organic” campaigns were popular.

The second group of messengers were same sex couples. Their own real stories were one of the most persuasive arguments to the public and policy makers. The third group of messengers were expert specialists in law, society and gender because they were able to provide a lot of academic and legal evidence to support the legislation of same sex marriage. Besides, I DO also used a unique character called Piggy in short animated stories on social media channels to explain simply the necessity of joining I DO campaign to the target audience. 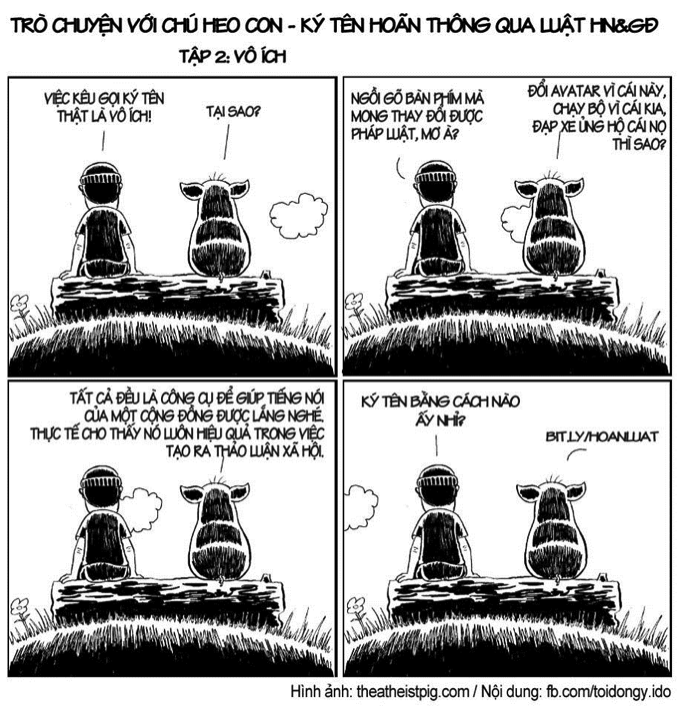 How was this campaign taken further?

The campaign developed a sub-campaign called “I used to disagree”, based on change journeys. The idea is that we don’t listen enough to people who disagree. It was story-based and disseminated on social media. One prominent MC became a public face of this sub campaign but it was mainly based on “ordinary people”, that others could easily identify with.

The idea came from reading the post of one person, that really captured the attention of the campaign team. That’s how many campaigns start: from seeing a powerful message developed by “ordinary” people online.

So the campaign was only online?

I DO also has an ‘offline’ team to bring directly I DO message to people who do not use Internet in local communities. People in this team informed about the I DO campaign through banners and posters in their local communities and took campaign photos of supporters, for example of vendors, workers, motorbike drivers, elders. Furthermore, this team also created public events such as festivals or musical concerts to gain more attention from the public. For instance, in October 2013, over 2000 people of all ages and social groups gathered in a festive atmosphere to celebrate the “I DO” festival in Hanoi, showing their support to equal rights to marriage and family. In 2014, the I DO campaign organised such activities not only in Hanoi but also in Ho Chi Minh city or Hai Phong city, where thousands of people gathered to raise I DO messages in offline events. 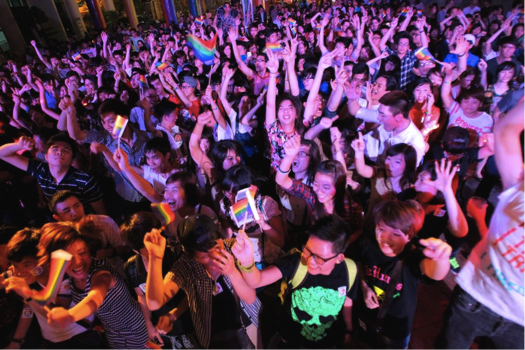 Young people excitedly joined in “I DO” festival in Hanoi in 2013. 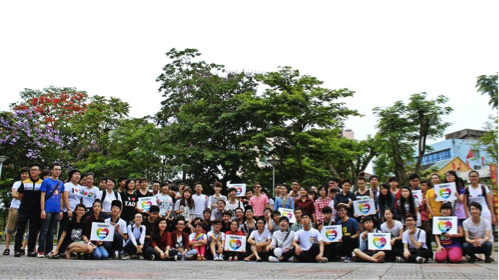 Offline I DO events in Hai Phong in 2015

What were the outputs of the campaign?

After two months, we had collected 70,000 signed I DO photos and 5000 letters of support to same sex marriage were sent to the National Assembly.

iSEE has a good network of journalists so had a good capacity to have the campaign covered by national television, radio and printed media.

The campaign also printed 500 copies of a petition with 10,000 signatures and sent them to National Assembly members.

In 2013, Viet Nam gave same-sex couples the right to live together.

In 2014, the National Assembly revised the Law on Family and Marriage so that private same sex marriage ceremonies would no longer be fined.

While the campaign didn’t result in full marriage equality, the campaign was a win in terms of public education. Mainly, it changed the perception of sexual and gender diversities as diseases and contributed to reduce the levels of stigma. One indicator of this is the number of campaigns in favor of sexual and gender diversities which have been done by various stakeholders since then.

Furthermore, in 2014, iSEE cooperated with the Health Strategy and Policy Institute to do a survey about the attitude of Vietnamese people to same sex marriage, and send result to the National Assembly (“More Vietnamese supporting gay relationships,” 2014). The survey shows that more than 72% of respondents said the legalisation of the same-sex marriage would not affect their family.

What is the future of the campaign ?

I DO was conceived since the beginning as a long term campaign, so each year we bring up a new call for action and focus on a new policy ask.

So every year, based on the process of changing policy from the National Assembly, I DO campaigners release ‘second stage’ messages to advocate, for instance:

Specifically, in March 2014 the organisations launched the “I Do 16+” campaign, as a reference to the article of the Family & Marriage law that we aimed to get changed.

We designed a new branding kit and rolled out a similar strategy, connecting to media partners (including both online and official channels, forums, facebook, news,…) and editing a promotional video. We issued a call for participation to all the country’s provinces and organised 8 provincial meetings to ensure a broad participation.

Many good campaign ideas were born from inspiration from message developed by “ordinary” people online, or during a march. Watch out for these. The best campaign ideas might not be your own, nor even in your team. But your genius can be to spot the great ideas, slogans, etc. out there. As an illustration of this, the Irish campaign for Marriage Equality was hugely inspired by seeing a person wearing a sign during a march in Scotland which said “I’m voting yes, ask me why”

Don’t simply ask people to share your message. People feel more ownership when you offer them a chance to participate more meaningfully, even if it’s very little. In this case, asking people to customize the avatar, rather than simply adopt the campaign’s own, made a good share of supporters engage one step further in the campaign .

Local events and mobilisations have a capacity to engage people in a way that national “top-down” campaigns don’t have. Associating local communities to the development phase of a campaign makes a huge difference in how they will take ownership of it and develop local actions.