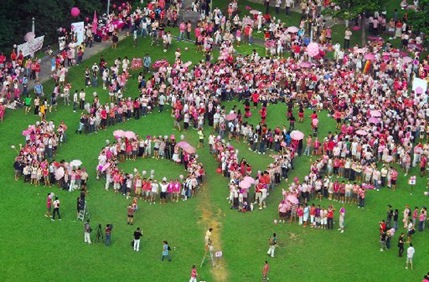 Pink Dot Singapore is an annual, non-profit, free-for-all event which started in 2009, in support of the Lesbian, Gay, Bisexual and Transgender community in Singapore.

It’s run by a group of about 15 volunteer members of the organising committee, with the support of up to 500 volunteers for the event itself.

Attendees gather to form a human ‘pink dot’ to show support for inclusiveness, diversity and the freedom to love. 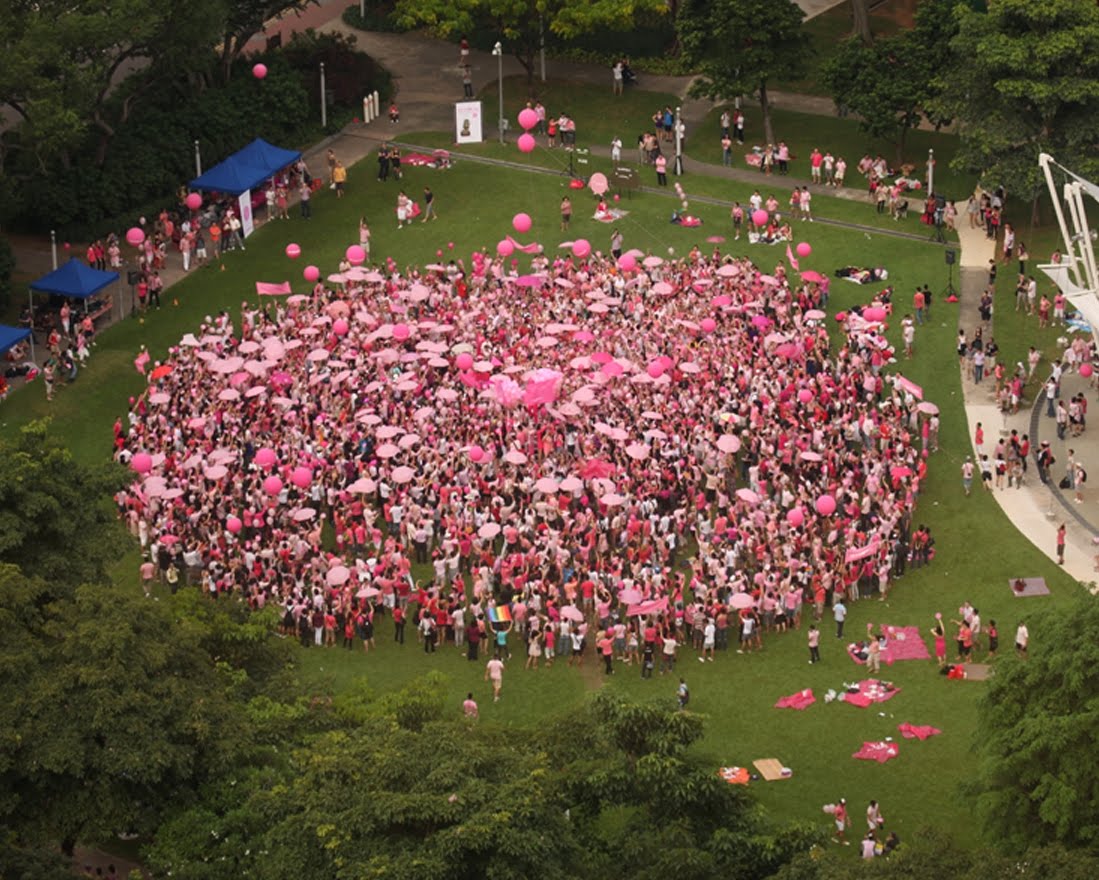 This type of event was made possible when in September 2008, rules governing activities conducted at Singapore’s Speakers’ Corner at Hong Lim Park were relaxed, allowing demonstrations organized by Singaporeans to be held at the park, providing that all participants are either citizens or permanent residents. This allowed the first Pink Dot SG event to take place at the Speakers’ Corner on 16 May 2009.

At that time, the main argument that authorities opposed to any progress on rights for sexual and gender minorities, including the decriminalisation of same-sex acts, was that Singaporean society was very conservative.

The initiative thus aimed at being a platform for the increasing liberal progressive public, to change hearts and minds of Singaporeans and to chart the evolution of society.

From the very outset, it was important for organisers to show that that the initiative was deeply a local one, in response to the mainstream opinion that sexual and gender diversities are concepts “imported from the West”.

The image of the Pink Dot was chosen to the reference to Singapore’s nickname as the “little red dot”. The color pink can also be seen as the merging of the red and the white of the Singaporean flag.

Aside from the titular formation, Pink Dot events usually also feature concert performances and community booths by organizations supporting the LGBT community and cause.

The event grew organically from 2500 attendees in 2009 to 4000 the year after and so on to a whooping 26.000 in 2014. Google spontaneously sponsored the event from 2011 onwards, followed the year after by Barclays and later by JP Morgan, Goldman Sachs, BP, etc. totally 13 major international corporations by the year 2016.

This resulted in PD being the only Singaporean event sponsored simultaneously by competing businesses. For some of these, sponsoring Pink Dot actually provided a first stepping stone in their support from sexual and gender diversities, gradually expanding to full fledged Human Resources policies for Diversity and Inclusion.

Throughout the years, the Pink Dot events applied a very important campaign principle, which is to be regular so you can build on past momentum, but innovate so you avoid fatigue: So after three consecutive renditions, the organizers decided that in 2012 the Pink Dot would be nocturnal, with 15,000 participants forming a glowing pink dot with mobile phones, torches and flashlights. This provided a good variation and re-energized participants. 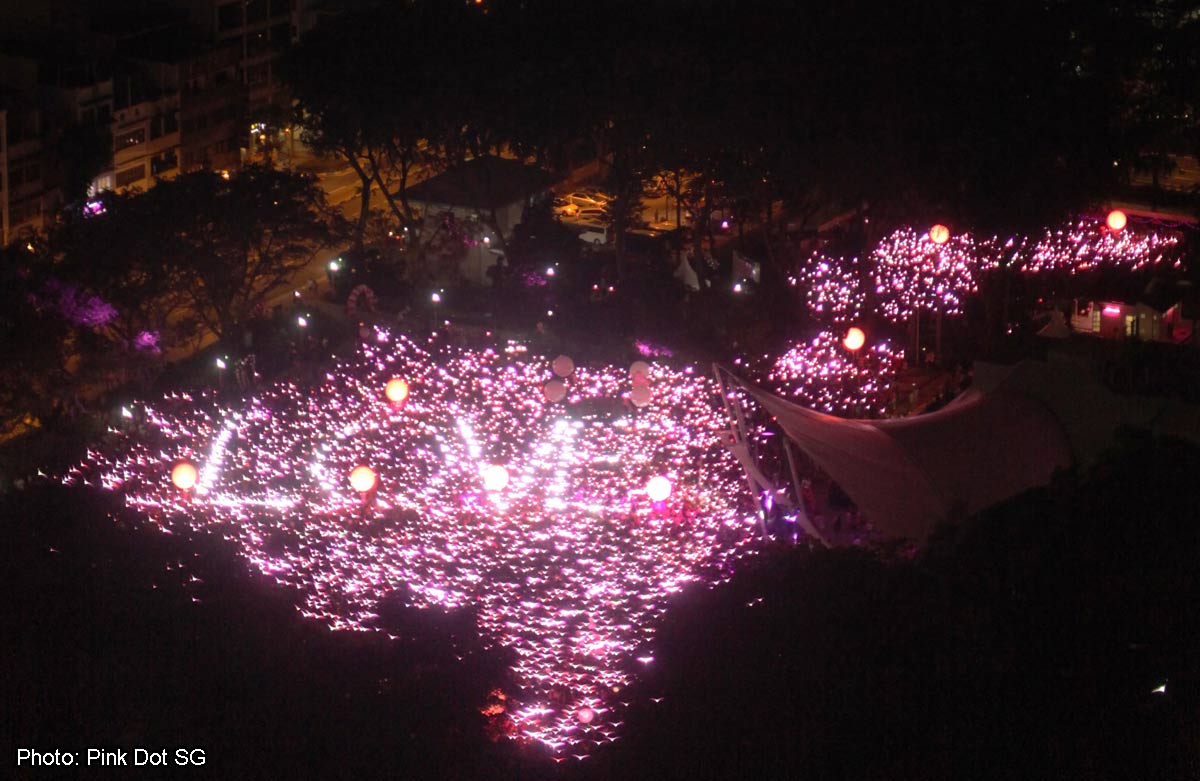 In 2014, Pink Dot innovated again: In addition to the traditional pink dot formation with torches, the 2014 event also included a blue heart formation within the pink dot. Pink Dot 2014 additionally featured a “Community Voices” segment, where speakers were invited from Singapore’s LGBT community and straight allies to share their stories.

In 2015 participants formed the word “LOVE”. 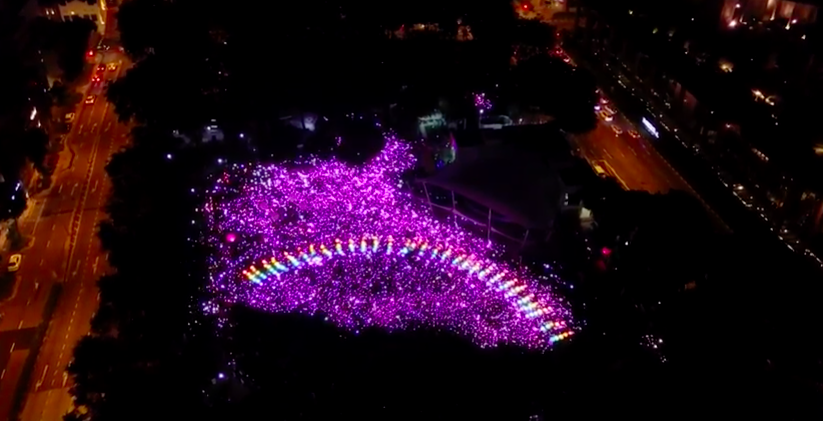 These variations also responded to the need for each year to have its specific visual identity, so that the evolution of the initiative could be easily shown. Initially, the evolution was meant to be only about the size as organizers hoped to gradually fill up the park in 10 years. Reality was that the park was chocked up after as little as 3 years so organisers had to find other ways to give each rendition its own visual identity.

The Pink Dot initiative illustrates well how important the “branding” of a campaign is. The visual effect of the Pink Dot is obviously at the heart of the success. Not only because it makes for great pics and provides a great incentive for media coverage, but because it allows all participants to be very uniquely part of the action. The emotional connection with the participants was further reinforced by the design of the Pink Dot SG mascot “Pinkie” 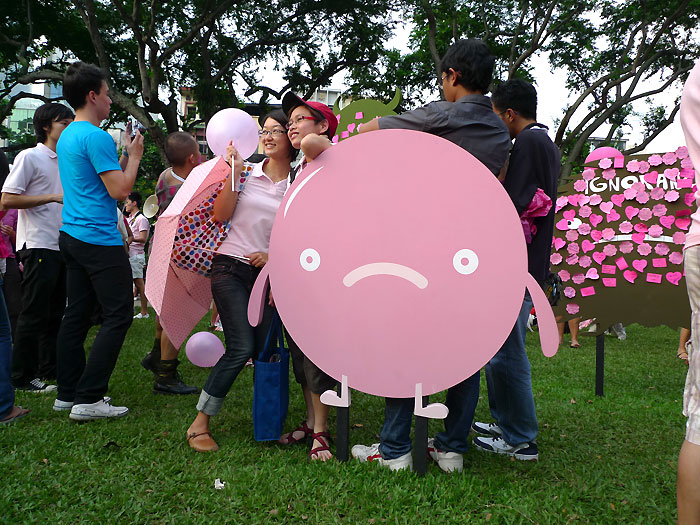 Although there has never been a proactive media strategy, the media coverage has always been very wide, especially taking into account that Singapore’s censorship laws forbid any media in the country to portray sexual and gender minorities in a positive light. Fortunately, a lot of Singaporeans are connected to international media, who don’t face this restriction. But for members of the Chinese, Indian and Malay communities who are connected mainly to either local media or media in their main language, this censorship actually results in a blackout of positive information. So social media obviously played a major role in getting positive coverage out to every corner of the nation.

As could be expected, success brought its toll: Pink Dot 2014 was the first year the event drew strong flak from Singapore’s Muslim and Christian communities. These religious communities voiced disagreement with the event and counter-demonstrated against the Pink Dot event in a “Wear White” event where participants dress in white apparel. This led organizers to start taking security measures. 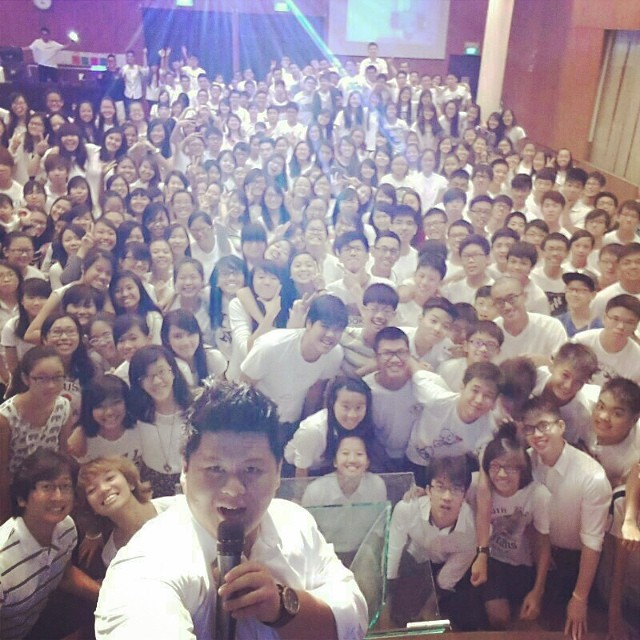 While the opposition from Christians was longstanding, and the result of a handful of very vocal, rich and powerful individuals, the mobilisation by Muslims came more as a surprise, as this community is traditionally rather low-key. In any case, the “wear white” mobilisation soon died out, with only one Church continuing the protest in subsequent years.

As is often the case in campaigns, these opposition also generated support from more moderate groups, in this case progressive religious communities who felt they had to make alternative stands on the need to accept diversity.

In 2017, authorities also started cracking down on the event. The Ministry of Home Affairs banned foreign residents and entities from organising, supporting and participating in the event, stating that LGBT discourse in the country should be restricted to its citizens. So only Singaporean citizens and permanent residents were permitted to attend the rally; the identity card of each participant was verified at the various checkpoints as they entered the barricaded park.

In addition, foreign companies such as Airbnb, Apple, Facebook, Goldman Sachs, Google, Microsoft, NBC Universal, Salesforce, Twitter and Uber were not permitted to sponsor the event. Despite the new regulations, 120 Singaporean companies donated to the event, making up for the loss of contributions from the multinationals. These companies, responding to the “Red Dot for Pink Dot” campaign, mobilised partly to express their opposition to the restrictions that Pink Dot had to face.

But these new measures were also a great opportunity to garner more support and momentum.

While organisers at one stage feared that the Government crackdown would deter participants, the park actually filled out in 4 hours and organisers soon had to turn people away.

Though this was not intentional nor the result of a willful strategy, this nicely illustrates how sometimes you can use opposition to generate more momentum from your supporters.

This video nicely shows how this worked:

Last but not least, Pink Dot events throughout the years applied another important campaign lesson, which is to be very consistent in the values that a campaign promotes: In this case the central value that has been consistently flagged is Freedom to Love.

To support this, other related values have been promoted, often in line with the specific contexts that the Pink Dot took place. These values include Family love and Solidarity, Peace, Acceptance, Unity, Patience, Dialogue. The non-confrontational tone is strikingly visible in all campaign material and even media coverage. The systematic playing of the national anthem also brings in the very important value of national unity and respectfulness.

For a summary of Pink Dot, watch this short and concise report by BBCnews