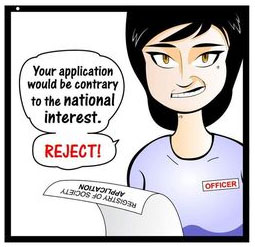 KISS with Comic Strips in Singapore

In preparation for Singapore’s UPR session on 27 January 2016, Oogachaga and Pink Dot Singapore, two of the larger LGBT+ organizations in Singapore, submitted a joint report about LGBT issues to the United Nations’ Office of the High Commission for Human Rights.

This report was a compilation of inputs from volunteers and professionals in various fields, and was organized in chapters around each of the issues it focused on.

Once the report was out, we wanted to give this work some extra exposure, as we didn’t expect many people from the LGBTQIA community to actually access the report itself. We didn’t really talk about an orchestrated “campaign”. It was more about awareness raising within the local LGBTQIA community.

After some discussions, the 2 organizations agreed to KISS (Keep It Simple, Sweetie). We decided to focus on publicizing the recommendations, by illustrating each issue with a short comic strip. We contacted the local gay cartoonist Otto Fong, who contributed his skill and time free of charge,

LGBT youth in Singapore are exposed to Reparative Therapy in order to change their sexual orientation and/ or gender identity. Internationally, these practices are denounced as harmful and unethical. We recommend the Government outlaw all such clinical practices.

This format, along with short explanatory write-ups, provides the best way to reach a maximum number of people, and not just young ones. Social media was the obvious channel for such a format as it was minimum cost, and we didn’t have the resources to print hard copies of the strips.

We didn’t actually have a complicated dissemination strategy. Pink Dot has over 60.000 fans on Facebook so we relied heavily on their viral power. Thinking about it now, we could probably have been more proactive. It was a “quick” add-on to the work we had already done with submitting the UPR report.

One of the lessons we learnt is that you have to be very strategic. In Singapore, the “obvious” strategy would be to campaign for decriminalization. However, we think that currentlydecriminalization may not happen easily in the near future in Singapore. Instead, campaigns need to focus on “low hanging fruits” and be strongly segmented so that the objectives are very specific.

LGBT students lack access to professionals who can provide accurate LGBT sexuality and sexual health education. We recommend the Government should implement comprehensive and LGBT-inclusive curriculum in schools.

Educators and professionals in mainstream education are not empowered to handle homophobic and transphobic bullying. We recommend the Government set up a taskforce to look into the issue of LGBT bullying and the well-being of its LGBT students and staff.

We also realized that embarking on a very concrete action like this public outreach work had a great capacity to cement a relationship like the one between Oogachaga and Pink Dot. It was a great opportunity to reaffirm our common values and paved the way for future collaboration. It was also important for the two organizations to be visibly seen working together at an international level, jointly for the benefit of Singapore.

All in all, this action made us realize that public campaigning might sound simple and fun, but that if you want to do it right, you actually need very specific skills and resources, which we’d need to build up over time. Campaigning can be very powerful, and therefore can also go very wrong if not executed properly.

You could be fired from your job, denied a promotion, bullied or blackmailed for being LGBT, and there’s no employment protection. We recommend the Government should include “sexual orientation and gender identity” in the employment laws.

Mainstream media guidelines prohibit broadcast of music or programmes that positively portray homosexuality, lesbianism, bisexualism and transsexualism. We recommend the Government should remove these discriminatory guidelines in order to provide accurate representation of LGBT persons.