From Macedonia With Love ….For All

From Macedonia With Love ….For All

Who supports the supporters? After brutal attacks on an information center, the Macedonian LGBTI movement decided to rally their allies in a novel way. Thanks to help from an unexpected quarter, they were not punching above their weight, as Kocho Andonovski from the LGBTI Support Center in Skopje explains.

Kocho, can you explain what kind of violence your organization was exposed to?

In 2013 our LGBT Open Center was subject to violent attacks from groups of vandals. We captured these assaults on our video surveillance cameras. They are really scary.

How did this lead to a campaign?

Initially, we edited the surveillance footage into a video with the help of the human rights organization Frontline Defenders.

We wanted to document what was going on and mobilize support for a response. The video sparked a lot of reactions from supporters and allies. This gave us the feeling the time was right for a proper campaign.

How did you manage the support people offered?

We wanted to channel all the support we got to make it effective and long-lasting. This might sound funny, but we came up with the idea of creating a ‘support group for supporters’. One volunteer took on the community management of this supporter’s support group and started brainstorming about possible actions.

This way, allies came on board from the very outset. A more classical approach would have been to develop our own ideas and then try to find allies to act on them. But in our view this is much less effective.

What kind of allies did you acquire in this way?

One of our supporters was the wife of Primislav Dimovski, a very well-known heavyweight boxer who was part of Macedonia’s Olympic team and she got him to be fully on board! We couldn’t have found a more surprising messenger to speak up against violence towards LGBTI people. As a boxer, Dimovski represents the very stereotype of masculinity and violence in the eye of the Macedonian public. The fact that he can be supportive of LGBTI right created a culture shock that was hugely effective in changing people’s attitudes. It meant a lot of people could follow his example and safely model their attitude on his.

Our supporters also came up with the idea of organizing a ‘book club’, a weekly cultural discussion event, which still lasts today. We also had the support of a lot of diplomatic representations. This gave a strong signal that we were on the side of the law, and that we were entitled to a call for justice.

To take your campaign to the public, you opted for radio commercials. Why did you decide on the airwaves at your main channel, and not billboards, for instance?

For us, radio represented the channel that was best in line with our objectives and our values. Let me explain this: our aim is not to confront people and tell them what to think. That would be a very ineffective approach to campaigning.

Instead, we wanted to engage with people in their comfort zone and slowly bring them to question their assumptions. The issue of sexual and gender diversities is very touchy, and people can close off very easily. That is what happens when you try to target them with more aggressive, unilateral channels, like billboards, that confront people without giving them a way to opt out. This only raises their defensiveness.

What is more, people are exposed to billboards in the public sphere, where the social pressure on people is at its maximum and where even moderate people would feel compelled to display negative attitudes, just to comply with social standards, real or expected.

By contrast, people usually listen to radio when they are alone, often in the private sphere, like in their car or at home. Listeners are usually attentive, and as the format is often around a discussion, people are more likely to pay attention and to engage.

One of our main problems is that people are bombarded with messages telling them what to think, telling them to be homo- and transphobic. We want to oppose this tyranny. So, we refuse to replicate that approach.

Last but not least, radio spots are cheap and are perceived as ‘low key’ media by the public, unlike billboards, TV and even somehow social media, which are perceived as channels of the rich, and reinforce the stereotype of LGBT people as affluent and using their money to make ‘propaganda’.

What message did you put across in your radio commercials?

We settled on the central campaign message of ‘Macedonia has love for all’. In this way, we wanted to frame ‘love’ as a national value. With the help of Frontline Defenders, we edited ten radio spots in two series.

The first series was voiced by LGBT people and a mother of a gay man. These voices were mainly aimed at strengthening the community and giving LGBT people confidence by hearing ‘their’ voice on air.

For the other series, prominent allies lent their voices: the boxer, a singer, an actor, and a journalist. These voices were aimed at influencing the ‘moveable middle’ we had identified. To our target audience, these spokespersons brought a credibility that LGBT people had not.

The spots were conceived in a very participatory way. We gave each person the broad focus ‘right and justice for all’ and ‘stop violence against LGBTI people’ and then let them come up with their own proposal of what they wanted to say. We had three meetings with each person who was doing a radio spot before the recording, to make sure it was really their message that they were expressing, and that they would therefore sound convincing and natural.

We also edited video versions of the interviews, but only disseminated them on social media.

What impact of the campaign did you see?

Another impact is that the movement itself felt invigorated by the fact that it was fighting back and didn’t go into hiding. It definitely reinforced its self-respect.

It seems to me the campaign was very strongly framed in very clear values.

We definitely had a strong focus on this. To recapitulate, we chose to activate the values of self-respect, courage, resistance, strength, justice. These are not the values that the public initially associated us with. This contrast is what we wanted to achieve.

To drive the nail even further, we chose the Maenad of Tetovo (also known as Menada) as the campaign’s visual. This is a pre-Christian symbol, which in Macedonia is very strongly associated with tradition and conservative values. The fact that we took this symbol and ‘queered’ it by making it rainbow-colored confused our opponents even further… 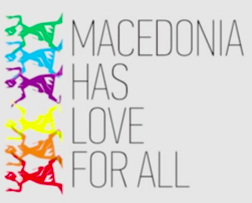 But in order not to fall into an arm-wrestling approach (‘my strength against your strength’), we systematically emphasized the value of love. That’s why the campaign had ‘love for all’ as its main message.

Did the campaign face strong opposition?

We did indeed face some opposition from some members of the LGBTI movement. They felt that the mobilization of a stereotypical figure of masculinity like the boxer, and the use of values such as patriotism, was reinforcing the conservative values that we were fighting.

Ironically enough, the conservative movements themselves were pretty much silent. After all, it is very difficult to oppose a campaign that defines love as a national value. Opponents would either have had to sound unpatriotic, or defend the image of the nation as not being loving. It put them in a “double squeeze” loose-loose dilemma, which is where every good campaign should drive its opponents.

The fact that ‘Macedonia has love for all’ doesn’t explicitly name sexual and gender minorities didn’t make things easier for the opposition.

We also had a tough time getting into most mainstream media, as they were controlled by the unsupportive authoritative regime that was ruling the country at that time. On this, the fact that the LGBT Center is part of the HC proved a very strong asset, as the HC board includes very high-level people who the media could not easily turn down.

Don’t respond to violence with more violence. Escalating the conflict might work when constituencies are strong, but in most cases sexual and gender minorities will loose out on this game. Remember Marvin Gaye (no pun intended) ? “War is not the answer, ‘cause only love can conquer hate”.

Frame with values. Campaign strategies rely on a set of very clearly defined values. Normally campaign theory tells us that there is a see-saw effect in values and that you cannot appeal to opposed sets of values. But sometimes this incoherence is the ‘culture shock’ your campaign needs.

Get your allies into your campaign as part of the strategic team. They too will find great creative ideas and their commitment can only be stronger if they feel they are implementing ideas that they contributed in generating.

Choose the right channel for your strategy. The most effective one in terms of outreach numbers might not be the one that will be coherent with the values you want to activate. Think outside of the box and don’t go for quantity but for coherence.

Get your opponents into a double-squeeze, so that whichever way they react, they will get it wrong. And watch them wriggle.