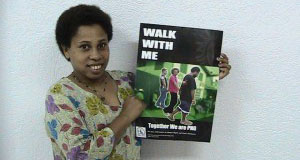 Strike a Pose… with a Poster!

Using posters has been a successful tool to get people’s attention for ages, even today where social media is taking over much of the communication and political lobbying. So why not bring those two together by adding an interactive factor?

The organisation Kapul Champions (KC) marked IDAHOT for the first time in Papua New Guinea in 2014, in a country where same-sex practices are still criminalized. With their campaign Walk With Me – Together We Are PNG they reached out to members of society to talk about issues of sexual orientation and gender identity; and advocated for law reform, supporting community mobilization and promoted increased access to health and HIV services.

With a poster promoting the campaign they approached regular people on the street, officials, regional and international supporters and even law enforcement to discuss the still existing stigma and discrimination against men of diverse sexual orientation and transgender people. Over 300 people participated and posed in pictures with the poster, adding their message to support the campaign, such as ‘We are walking with you’; ‘We don’t hate, We Love’; ‘I do not discriminate’; and ‘A great initiative from Kapul Champions, I support #WalkWithMePNG’. These picture were then posted on Facebook and by May 17 the FB page had 130 members.

We want to thank Nick Morea-Evera, the Senior Program Officer at Kapul Champions for taking time to share their experience and offering more insights into the campaign. Below is the interview with Nick.

It starts with the Poster which is called WalkWithMe. It is very inspiring, it says walk with me and we address stigma and discrimination for men of diverse sexual orientation and transgender in PNG (Papua New Guinea). Initial ideas for some poster campaigns including the Walk With Me poster were discussed among 40 young men of diverse sexualities and transgender people who were participating in a Leadership Development Group program that was led by AFAO (Australian Federation of AIDS Organisations) and Poros Sapot with Australian DFAT (formerly AusAID) funding. Taxi Driver stating “I transported all kinds of people, I do not discriminate” Source: WalkWithMe

Kapul Champions then further developed these ideas with support from AFAO to lead to the poster campaign. The idea of the campaign with the poster was to meet people out on the street, or in a convenient department or with the law because the stigma and discrimination is very high. We asked people to promote the poster from as a Human Rights based idea. It really helped me to go out there to meet people and introduce our organisation: what we are doing, how we work with men of diverse sexual orientation and transgender in PNG. I got to spread around ten posters a day. I came up to people who were busy with their jobs and said: “We have this organisation that works with men of diverse sexual orientation and transgender people. What are we trying to do is to promote Human Rights and to reduce discrimination within our society.” They looked at the poster and then they said what would be a message to us, how can we support this campaign. They would say the same things: ‘We don’t discriminate’ or ‘We don’t hate’. It was really successful in the sense that people said something, that I was there as an advocate to talk about the organisation and what we are doing.

Previously, there were some organisations who had done something similar. It is new to us, so we said we approach and meet people and get their feedback on how they would support homosexual people in PNG. We asked the people’s consent if they would be OK to be in a picture on our Facebook wall. And they said: ‘Go ahead.’ We were taking shots with people standing with the posters. And we asked them what they would like to say to that.

How many people were involved in the campaign, aside from you?

We had our board members to help. They are based in other parts of PNG. We have 5 regions here and the other board members also used the poster back in the provinces, in the highlands, Momase and in the Southern regions. So we were promoting the poster everywhere. We also had support from our friends who are members of other organisations. We sent the posters to our friends in Sydney who work with AFAO, and in Bangkok. And also to the guys who work with the MSM/TG, they also helped us to put posters on the block. So there was a good combination of posters.

It is really interesting to see how the poster spoke to the people about the idea of accepting men of diverse sexuality and transgender people. I also did an approach to the parliamentarians. One time, they had a meeting and I walked in there to talk to them about it. I asked them if I could put the picture with them on the wall of our Facebook page and they were OK with that.

What were the risks and the threats you feared and/or faced and how did you cope with them?

The fear that I had was that they would ask me about illegality but actually nobody asked me that. All they did was to look at the poster and that was the most interesting thing for me.

We are an organisation for men of diverse sexual orientation in PNG. I think our country is a very good country when you approach people to talk to them about what you are doing. They tend to accept anything if you explain it in a nice way, on a face-to-face level and I never had any negative responses from anybody. They were just happy to take their pictures and have it on Facebook. They were happy when I told them where they can find the picture and they said they would check.

I also had support from AFAO who support our organisation for the last three years. They are really supportive of what we are doing and they helped us throughout this campaign. For us, it was something really new and I also had the fear that there would be stigma or discrimination towards me if I walk through the streets with that poster. But I think everything worked out pretty well.

Did people also hang up the posters in their stores or offices?

When we took the shots with them and the poster we told them that this was their poster. We asked them if they would hang it in their houses or on the wall in their office space. That was their decision.

How much time did you spend with preparing and conducting the campaign? And also how much did the whole campaign cost you?

Going out on the street is cheap. Cabs and buses here in PNG are really cheap. It is really not that much, and the helpers did it for free at their own hours. The main cost was printing the posters. We also received support through funding from Australian Aid.

We sat down in a meeting to discuss ideas for May 17. In February we opened the Facebook page and told everyone in their provinces about the poster and that they would promote it. So in less than 5 months we reaches out to over 300 people. It was in a very short time.

And in May we launched the article which was written between KC and AFAO to summarise the poster campaign activities and achievements. It was then distributed to KC stakeholders to profile the campaign and increase KC accountability and reporting on its activities to key partners.

How would you rate the impact of your campaign? Do you think it had an effect on society in PNG?

The KC membership has grown through this campaign which strengthens the network of men of diverse sexualities and transgender in PNG. I think it is slowly getting to the mindset of people, the diversity of sexual orientation and identity.

I would say there is more that needs to be done, with different messages to reach out to people. The approach in PNG has shifted to the key populations here. If I would do it next time there will be more information about what the key populations are doing. KC along with other CSOs, were invited to join parliamentarians from the Committee who focus on the HIV response, and in this meeting I spoke with them about the work of KC, freedom from discrimination and how that links with the HIV response.

After the poster we also had some media things, so people begin to understand that this is about men of diverse sexual orientation and transgender people. It worked out well but there is more to be done. People have different attitudes and different mindsets, so stigma and discrimination is always there but we need to keep on being out there to educate people and tell them about identity, gender and all these things. And explain what we really want.

The last question would be if you have any advice for people who are starting to plan for IDAHOT and who might want to do something similar to your campaign?

I would say: Have the confidence to go out there and talk to people.

And don’t forget to work with the people who are already working in the field, like NGO’s who are working with the key populations. Always ask for their advice and they will give their input. That actually helped me to be motivated for days and helped to move out there to do something better. Make a list of people, reach out to them and ask them if they will be there.

One thing I did not talk about with people was same-sex practices because in PNG the laws says that same-sex acts are illegal. We can say we are doing this campaign for men with diverse sexuality to reduce stigma and discrimination against transgender people and MSM. Sometimes they ask me about the terms and I have to explain these things really carefully. I also say we are doing this to reduce the negative impact of HIV on all the homosexuals, sex workers and transgender people. So they have an idea of what we are doing and why. Poster of the campaign WalkWithMe – Together We Are PNG