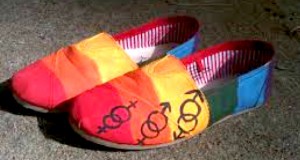 Protest of the Invisible – an arts display of shoes

The long walk to freedom starts with a “Stand-in” of empty shoes.

Interview with activists from Tbilissi, Georgia on the  International Day Against Homophobia and Transphobia 2014 For IDAHOT 2013, LGBT activists tried to hold a public rally, which was labeled by opponents as a ‘Gay pride’ and attracted a huge counter reaction, led by religious leaders. The activists who had gathered barely escaped a terrifying violent mob. This created a big trauma.

In 2014, although some isolated activists wanted to take public action again, a consensus was finally reached that there should be no action where people could be identified, or exposed to public violence. So we had to think about what we could do while still being invisible.

So how do you make visible that you are invisible ???! We brainstormed a lot and came to the idea to put the shoes in the place where the IDAHO rally was crashed last year on 17th of May. We felt that this would convey two messages at the same time: that LGBT community could not hold a rally this year, and that despite this, the LGBT community is present and its existence will always manifest itself in one way or the other. We thought that shoes indeed were a good symbol: they clearly represent people, and suggest that these people stand, hold their ground, but also are on the move. [The idea of shoes was partially inspired by the holocaust memorial in Budapest, where the shoes stand on the side of Danube honoring the Jews thrown into Danube in 1944-45].

So we decided to ‘occupy’ a popular square in the capital city with an arts installation of roughly 100 pairs of shoes, and pinning all around the premises a text that would explicit this display.

–       What were the main expectations in terms of outcomes (media attention, public attendance, academic interest,…) ?

We mainly wanted to attract sympathy from the public, by showing that while we (the LGBT people) exist, the menace that people think we constitute, does not. So by displaying this very peaceful and silent protest, we wanted to balance out other more confrontational protest actions.

The notion of ‘invisible’ was also conceived as a way to connect our cause to the lived experiences and the frustrations of many other marginalized groups in Georgian society, among them also some of those that were demonstrating against us: I actually attended the anti-LGBT demonstrations myself, to listen to what people had to say, and it stroke me that many of the participants of counter-demonstration weren’t so much opposing us, but rather they used these demonstrations as a platform to get their own claims heard. Unemployment, poverty, lack of respect, etc. : these were the subjects of discussions, beneath the very thin varnish of anti-gay slogans. People were angry and frustrated that their concerns were not being addressed by those in power, that they were invisible themselves. So by focusing our discourse on invisibility, we wanted to underline that invisibility is not only a challenge for LGBT community but for many other groups in Georgian society, with whom public space is not shared, who’s voices and problems are neglected.

Of course, we also wanted the action to be visual enough to appeal to the media. It indeed attracted immediate coverage by the main online news channels.

– What were the risks/threats involved and how did you mitigate them (counter demonstrations, police harassment, media indifference, etc.) ?

Obviously, the greater risk was the security of the people. Any action in a public space could potentially have grow violent at this point in Tbilisi, as even if the LGBT community didn’t organize any public action, counter-mobilization still took place on 17th of May. Thus we did not inform the media, or the city authorities in advance, and tried to stay very discrete about the plan.

– How did you get it done ? How much time did it take ? how much did it cost ? how many people did it involved ?

We spent about two weeks collecting shoes from family and friends and bought some second hand. On the 18th, very early in the morning we drove to the square we had chosen and did the installation rapidly. Police officers on duty immediately showed up but we had a good contact with them and they actually constituted more of an informal protection than a problem, which was nice to experience. If the police had been very hostile, I guess they could have blocked us but the risk was not very high, as we were not doing anything illegal: an arts installation doesn’t require any particular permit, as long as it is not blocking traffic.

The logistics itself cost nothing. A handful of people, or even one dedicated individual, could get this off the ground.

– How did you analyse the impact of this action?

The fact that at least something happened to celebrate the International Day Against Homophobia and Transphobia, and that we did not fully give in to our opponents, was hugely appreciated by the LGBT community. It created a sense of pride and empowerment.

Also, the media which covered the event did a series of interviews with passersby, revealing surprising statements of support, which we might use in future for further campaigning initiatives.

Besides, some people who had learnt about the action through the media, came to the site of the installation and put their own shoes next to the ones standing there, showing support, though we never made a call for This indicates that it caught people’s imagination so we might do this action again next year, in a more collective way, engaging the public for support.

–       what would you have done differently ? what advise would you give to other people who’d like to undertake this activity ?

My piece of advise to others would be that any action has to be carefully crafted in collaboration with all major existing LGBT groups, as they are the ones who have a longer term strategy into which this kind of action can fit, or not. These discussions can take time. Be prepared to handle that.

Also, these actions are a very good hook for media education. You should be prepared to use them strategically to further their understanding of the cause.

Protest of the Invisible

This is an installation for the invisible. Those who are unseen, those who are not heard, whose existence is not recognized. This installation is for all of us who encounter daily, but don’t see and listen to each other.   For those who cannot leave home and for those who have no home to shelter,  For those  who were forcefully displaced several times by:   the military,  the government,  the banks,   their own families,   For those whose work remains unappreciated,   For those  on hunger strike demanding to be heard,   For those for whom we do not have enough public space,  For those  we cannot protect from insult,   For the victims of violence and blackmail that have never been investigated,   For those that have to pray in silence,   For those who have to hide their names.   Today, these empty shoes stand instead of the persons, who had the courage to stand against the invisibility of one of the groups, the LGBTQ community one year ago on May 17th –  who attempted to unmask how merciless we are, and discuss our common challenges, but who’s gathering was violently dissolved. Those who wish to stand here today to share their woes and joys, but neither the state, nor the society respect their voice and their existence.

This is a protest for the invisible and against invisibility. Despite the fact that we still do not manage to acknowledge and appreciate each other, we all exist, with our dreams, thoughts, with our daily lives. Turning a blind eye and covering up ears will not won’t erase our existence, will not heal our wounds, will not disable us to on  May 18.