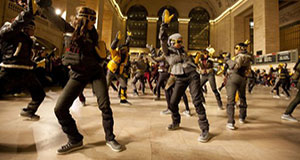 As a form of flash mob or street action, ‘freezing’ actions have been a powerful tool to raise awareness. Many causes and organisations have used this action to address various issues. Thereby, the ways of conducting the freeze action can have different forms, from interaction with the passing audience, symbolizing through positions, theatric play, to name just a few.

One example is the Freeze Action during the Parkinson’s Awareness Week 2013 in London. Through freezing in everyday activities the participants want to inform about the conditions that people with Parkinson’s live with and to highlight the importance of changing attitudes towards them. You can find the video here.

Freezing actions have also been performed for the International Day against Homophobia, Transphobia and Biphobia. In 2012, the social support group for LGBTI youth Zaque held a freeze action in Bridge Mall in Ballarat for IDAHOT where after freezing for 45 min they revealed personalized T-Shirts to raise awareness and celebrate diversity. This year, the organization Athens Pride is preparing a freezing action in a busy shopping street with the clear and powerful message ‘JUST LIKE YOU’!
We talked to Foteini Pipi, one of the organizers from Athens Pride about their plans and how they are preparing for the action.

Can you tell us about your planned Freeze Action? How did you come up with the idea?

We were planning more events for this year and then we decided to also do something for IDAHOT 2015. I called the volunteers of our organization to come up with an idea. And they suggested the Freeze Action that will take place in a mall here in Greece.

The idea was that we have to make our society – that is narrow-minded here in Greece – to become more open-minded about what it means to be gay, lesbian, trans, bisexual.

We thought about showing six different aspects of our lives to make them feel that we are no different from them, that we are all people. They haven’t seen anything similar to that, so they thought it would be nice to show something different here in Greece.

We have started planning that Freeze Action in February and we called it ‘JUST LIKE YOU’. The message is clear: we are just like them.

We will have six people wearing six different T-Shirts, each with a different color of the LGBTQI Flag. As they walk by the people they will freeze in some position of everyday life, ordinary and casual moments of our lives. For example: a girl who is brushing her teeth, a gay couple feeding each other or cooking together. Another person who is just shopping… Behind the volunteers there will be a banner with the ‘JUST LIKE YOU’ logo and some phrases from people about what the LGBTQI community is. Around them will be some volunteers who will help them to stay in the Freeze position and who will attract people who pass by to stop and have a look at them.

That is the main plan for now, there might be some small changes but the general plan is that: Six people, six different positions, six different colors of the flag and the logo.

With the location you chose, is there a specific part of society or specific audience that you are addressing and that you reach out to?
We are addressing all our society and whoever is there at that time to see us. It is a very popular street, it is a shopping street, so it is really everyone. We wanted to reach as many people as possible and this is why we chose the location.

When you do the action will you also hand out flyers or other information material?
We will have a banner and some volunteer who will be there to talk to the people who have questions or want to know more. And we will have some pins with our logo ‘JUST LIKE YOU’. And we will explain the action to everyone who wants to buy it or take one.

Are you cooperating with other organizations or groups, or is it just Athens Pride and their volunteers? And how many people are involved in the organizing part?
We are the only group in this action. I don’t know about other groups who have something planned for IDAHOT yet!
For the organizing part we are about 10 volunteers but the idea was developed in a group of about 50 volunteers.
It would be better if we had an idea that requires more people. But for this action 10 people is actually fine because 10 people organizing and taking action is big for us.

Did you set yourself a target or numbers that you would like to reach for that day?
We would like to inform everyone who is passing by. We would be happy if everyone who passes by that day will ask us questions and we can inform them about the LGBTQI community, and specifically about the action on that day, to raise awareness of the day and what the Freeze Action represents. So it would be nice if we can inform 100-200 people that day.

Do you think there could be any risks involved during your event? And do you have a plan on how you will face those risks?
Yes, last Sunday we were preparing for such occasions through imitating debates among the volunteers, for people who are against Prides and the LGBTQI community. We try to not be aggressive with those you are against us. The debates were meant to prepare us for occasions of aggressive behavior.

What do you think is the most important aspect of preparing the action?
Our volunteers sometimes don’t have the confidence to take responsibilities. The most important aspect for me is that if they take responsibility to be in the action, that they actually are responsible.
And to work as a team! The other aspects, such as where we will be standing or what are we going to need or the people we will have to face, will come. We have some more meetings and time. So the most important thing is for the people involved to act as a team.
Therefore, we have team-building actions and meetings. The first thing we will do in about two weeks is to have a meeting where they will get to know each other better, with games and actions. Because some of them don’t even know each other’s names.

Are you planning of advertising for your action before the day and if so, how?
We will have some social media events, that’s for sure. We will address the other organizations and groups so that they might want to help us making the action popular among their audience. We are also preparing some videos now, as we speak, for YouTube that will refer to the Freeze Action. We probably won’t have any posters but I think we will make some flyers for the days before and for the day of action.
We will address people who we are already connected to. Some of our connections have a young audience that doesn’t even know about the day. We would like them to be there, to see the action and to know about the issues we address. And then we will have some flyers that we might spread around the Universities, or where ever the volunteers want to.

Do you have any advice for other people who are planning to do something similar? Since you are in the midst of organizing there might be some things you think are important to focus on.
My advice is to do something simple and address as many people as you can. This is the reason why we are doing the freeze action: it is public. We have to be seen somehow and the Freeze Action has emotions. It makes people feel somehow lost, confused but it is so strong on an emotional level. So my advice is to make something public, like a flash mob where you make people also uncomfortable, if I can say so, to put them in an unexpected position. Or make the audience happy, for example with a Dance flash mob.

This all sounds like a great action and we really wish you all the best for the preparations. And we are looking forward to seeing the videos and pictures!