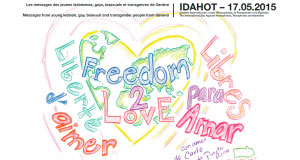 We all know the problem: Flyers, pamphlets or posters are often ignored or thrown away before even being read. In Geneva however, activists have come up with a fantastic idea on how to make sure people will have a second look: IDAHOT Placemats.

Organizers from the Swiss LGBT group Dialogai, together with their partners at UNAIDS and other groups, first designed and distributed placemats for IDAHOT in 2013. Since then, the campaign has been a great success and went into its third edition this year.

We talked to Leona Godfrey who has been part of Dialogai for many years and was one of the main initiators of the IDAHOT Placemats campaign, so she could share insights into the process and the outcomes of the action.

Leona, please tell us a bit about the campaign, how you came up with the idea and how you came to cooperate with UNAIDS on this. Dialogai is the oldest Gay Association in French-speaking Switzerland. It is 33 years old. So, we have been partners with UNAIDS for some years now. During discussions we came up with the concept of the Placemats. That was in 2013 and the first year we had a campaign with five different placemats in English and French about the gay community worldwide and the different statistics, for example the death penalty in seven countries, where people are protected and where they are not, etc.

The mats were distributed to about 25 different restaurants and two schools in 2013. It went down quite well and we distributed from Kebab places to really posh restaurants.

The second year the mats featured the ILGA map that had been readapted by UNAIDS. Though some restaurants considered the information as too harsh, we did more outreach work and in the end we distributed them to 34 restaurants. Last year we also had five schools that took the placemats.

This year we are doing it again with UNAIDS. people to draw different images and text that express what they think about Homophobia. And we are going to use these images for the placemats.

We do these things to raise awareness. Kids are influenced by their parents, their elders, so putting down these placemats where people are having lunch and dinner aims for people to acknowledge the problem and discuss it. Not just the situation in  Switzerland but in the rest of the world. Geneva is an international city so the mats will be edited in English, French and Spanish

So you talked to the owners before handing in the placemats. Did you also just go into some restaurants and placed the mats as kind of a spontaneous action? I talked to a lot of them before but there was also the last minute improvisation and people were really supportive. What we, Dialogai and UNAIDS, did in return for their publicity was obviously to encourage our community to go eat at these restaurants and take pictures of the placemats.

Was this action a stand alone, or part of a wider program?

Two years ago, the placemats were part of a full IDAHOT week of events against Homophobia, which included cooking meals from homophobic countries, concerts, all kinds of different things over a ten-day period.

The city of Geneva also got involved last week and added their logo on the mats. They connected this to their own anti-homophobia campaign, which they do in May, though the two actions are really separate.

In general, how would you rate the impact of the campaign in the last years? It seems like you received good feedback.

We got very good feedback. I got calls from so many people who asked to have some of the placemats.

For the first two editions we printed 10.000 placemats. That is a lot and Geneva is actually a very small city. It was interesting to see the different types of places that supported us, and support us again this year. Before we only had them for a couple of days but this time it will be a whole week.

Did you have any media coverage ?

No, we did not get any media coverage. But I reckon this year we will because it is always like that. You do something, you have an idea and if it is the third year running they are sure it has some impact. Especially now that de Ville de Genève is doing their own campaign against homophobia, that will be on the city billboards.

Did you encounter any negative responses?

No, to be honest with you, surprisingly not. People have been very good, very tolerant and very accepting with the project. And very supportive.

And before you started the campaign for the first time did you think of any risks or anything that could happen, such as people getting attacked?

Oh yes, of course. Walking into some places I feared I would get insulted. But it just never happened. A lot of people are very curious about the gay community, so they ask questions.

How many people do you actually have in the organizing team and what are your plans this year?

We are about seven or eight, from various organisations

Do you have any advice for other groups who envisage similar actions.

If I were to give any recommendations is to go first to the people you know. Don’t go to random places, go to the places that you are familiar with, to get this feel of comfort and security. Move on to other places later in time.