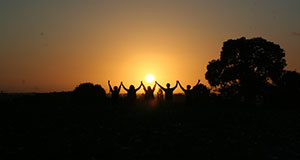 It’s surely one of the most simple human gestures of companionship, but many same sex couples feel uneasy about doing it – even in relatively free contexts, where legal equality has been won.

A hand-holding flashmob could be a great way to open people’s eyes to these issues, which affect the daily lives of so many of us.

It could also be a smart alternative to either a Kiss-in or a Free Hugs Event, especially in contexts where people could face hostile public reactions, violence, restrictions by  authorities, or imprisonment, if they were to organise something more confrontational.

More low key, but perhaps for that even morepowerful, a hand-holding action could actually attract greater public (and media) sympathy for the struggle of LGBTI communities to express their love, friendship and solidarity with one another. Still from teaser video to promote hand-holding flashmobs on May 17, 2013.

On May 17, 2013, an Austrian network of LGBTI allies joined the Global Call to form a Global Rainbow Flashmob to mark the Day. Members of the country’s Green Party Youth section called for joint hand-holding flashmobs to be held across the country, and encouraged environmental activists, LGBTI community groups and the public in general to participate.

In the lead up to the Day they created this great teaser video which features different LGBTI young people explaining why they are organising, and calling on others to join and spread the word. On the Day, actions took place in 7 different cities (Vienna, Graz, Dornbirn, Kufstein, Salzburg, Wels and Baden), and the initiative was picked up by Austrian and international media.

To make it a flashmob style action, all you need to do is to have one couple holding hands, in the middle of the street, who are then joined by more and more couples – before suddenly there are loads of couples holding hands together. If you do it this way, it would be neat to film it (and share it on social media), and also to maybe have leaflets, stickers or print-outs explaining what the broader meaning of the action is (or directing people to a link online).

It’s also the kind of action which could work well in the form of a march, with various couples all walking together from one meeting point to another. Even with just a handful (sorry!) of couples you could easily draw people’s attention, and the photos would work well to share on social media. Such a simple action to raise awareness!

With six couples (or more) you could also organise for couples to participate dressed in a particular colour of the pride flag (red, orange, yellow, green, blue and indigo), which could also make for great visual results.

Or, how about a human chain or collective ‘hug’? That’s what a network of Italian LGBTI activists, allies and friends decided to do for IDAHOT 2014, with great visual results and a strong symbolic stance for the reclaiming of public spaces for free expression of LGBTI rights, and for companionship and solidarity!

Organised by the local youth section of Arcigay, the city of Vicenza (Northern Italy) hosted a big ‘hug’ against homophobia, biphobia and transphobia, on May 17. More than 500 people gathered to ‘hug’ the Palladian Basilica, a UNESCO monument, by hand-holding around it, in the form of a human chain.

Again, this is a low cost action with community solidarity, visibility and well-being at its heart. All you need are folks in the city and a place of choice to ‘hug’ !

In the face of rising violence, including two recent murders of local land rights activists, tens of thousands across Honduras formed human chains on Sunday in a symbolic call for peace.

TeleSUR reports that 40,000 Hondurans participated in the actions, which took place in the capital of Tegucigulpa as well as scores of other cities.

The human chains were organized by 30 human rights groups, including the Honduras Towns Association and the “Say Yes to Life” movement, which denounced the country’s estimated 14 homicides per day and forced displacement of tens of thousands fleeing the violence.

“The human chain is a peaceful demonstration, focused on the citizenship, on all the Hondurans who have experienced the pain of violence in various ways,” organizer Nery Cerrato told the EFE news agency. “Honduran society does not deserve to be stigmatized as the most violent country in the world.”