For many people, not least LGBTQI+ people themselves, same-sex attraction and gender non-conformity are things of the modern age.

For many, they have even become an indicator on how “modern” a society is. Pursuing this theme, many campaigns focus on how “new” sexual and gender variance are. This is particularly true for campaigns targeting what is known to marketing as “early adopters”, the group of people most likely to be attracted by new products and ideas.

This doesn’t come as a surprise, as homosexuality and Trans expressions were hardly documented at all in the past. Even when they were recorded, as was the case by Berlin 1930s’ Magnus Hirschfeld Institute, very few documents escaped destruction.

Although presenting LGBTQI+ issues as something “new” might be a good tactic to use when addressing young people, or when creating distance from historically negative representations and stereotypes, it tends to reinforce the preconceived idea that same-sex attraction and gender non-conformity are by-products of the modern age, hence not “natural”. This often translates in countries in the global South and East as “imported from the West”.

To balance this out, many campaigns have taken a retrospective view. LGBT History Months for example are being celebrated in various countries at various dates, and constitute excellent opportunities to reach out to schools and universities.

These campaigns have several entry points:

Highlighting same sex attraction and gender variance from the past

This is a powerful tool to reclaim the “authenticity” of our identities. It generally creates a strong impact with LGBTQI+ people themselves, as it links us to a heritage that we were often denied. This image, which dates back 120 years and is yet strikingly similar to a contemporary social media post, is a good illustration of this.

Photo: Loving: A Photographic History of Men in Love 1850s–1950s is a unique collection of photographs depicting romantic love between men in various contexts. The book is published by 5 Continents. All pictures courtesy of the Nini-Treadwell Collection.

In other contexts, this approach has also been used to “shock” people out of their preconceived ideas, such as this SouthAfrican “Pop up for diversity” campaign which highlighted historical African forms of same-sex conduct and gender non-conformity. 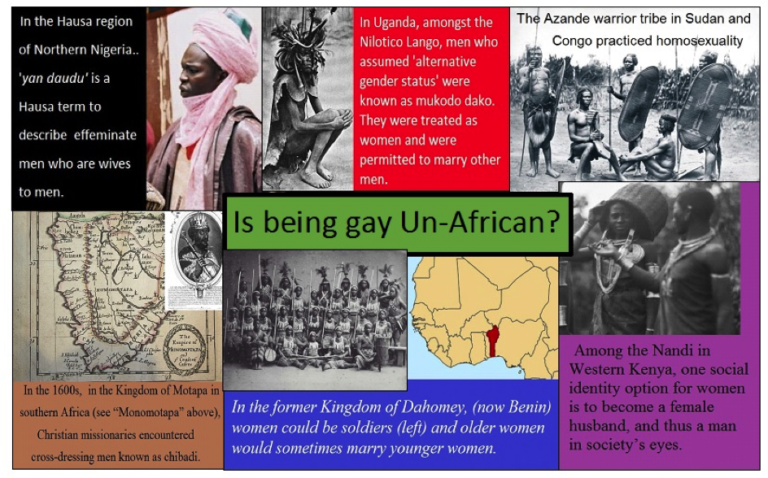 Documenting the history of the LGBTQI+ movement

This is aimed mainly at the community itself, to build stronger awareness of how things have evolved towards the current situation. These campaigns are important to pay tribute, and also to raise momentum for activism and to inspire a new generation.

Examples of such initiatives are abundant. Interesting formats include:

Documentaries and fictions, such as the many we feature in our special article on how LGBTQI+ activism has been put on screen 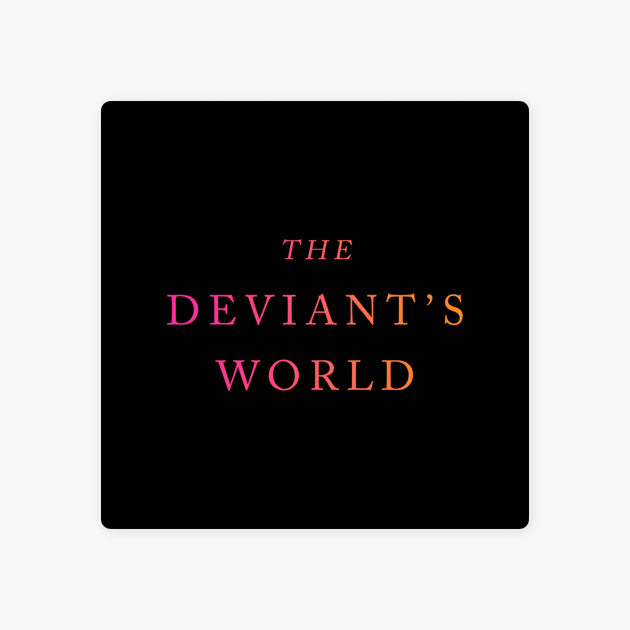 .
.
.
.
Podcasts, such as the Deviant’s World
Harvard and Cambridge-trained LGBTQ+ historian Dr. Eric Cervini hosts The Deviant’s World, which explores LGBTQ+ history while also weaving in current events and news. For example, in May, he released an episode titled, “From Selma to Stonewall?” which explored the ways Dr. Martin Luther King Jr, Malcom X, and the Black Freedom Movement contributed to the fight for LGBTQ+ equality.
.
.
. 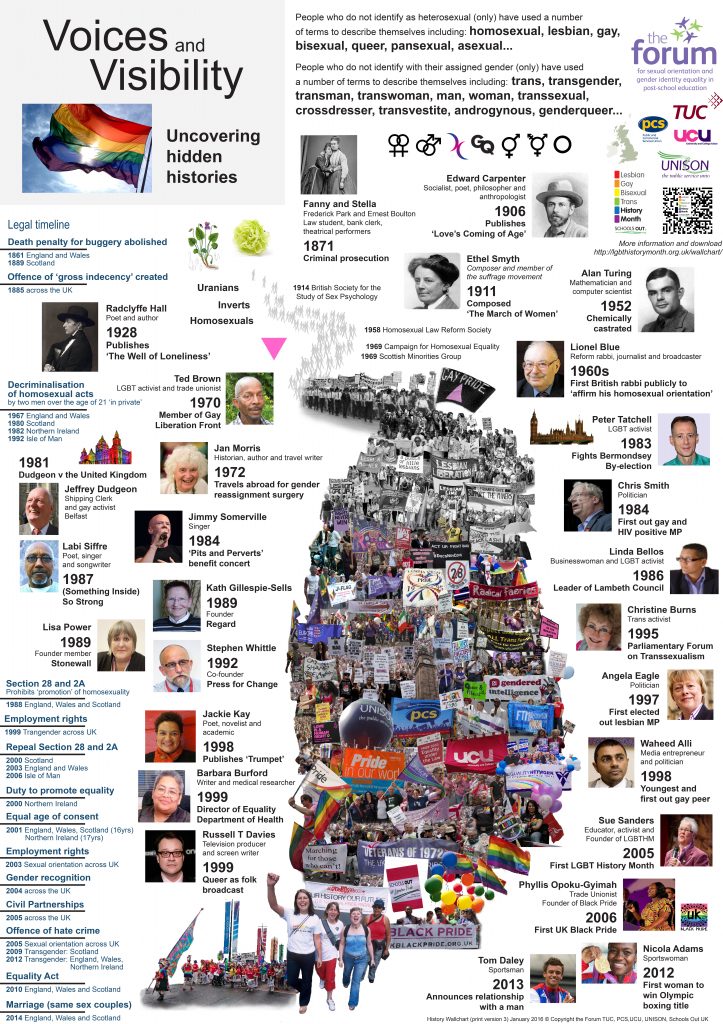 Timeline Posters, such as this one from UK’s School’s Out program

Highlighting the contribution of LGBTQI+ people to History

This aims to boost the sense of self-worth of LGBTQI+ people by showing how much their peers have contributed to society. It also helps to connect to the wider public, by inviting a sense of acknowledgement, if not gratitude or admiration.

From Alexander the Great some 2,300 years ago to Oscar Wilde a century ago, there are of course lots of historical figures whose homosexuality or gender non-conformity is well known, and remains part of their legacy.

While it is crucial to bring these important figures back into the public eye, it creates a greater impact to focus on people whose sexual orientation is largely unknown like Shakespeare, Leonardo DaVinci, Tchaikovsky or the more contemporary Billie Holiday. This approach helps to deconstruct boundaries.

At the crossroads between the distant and the more recent past lies the presentation of historic heroes who were obliterated by science because of their sexual orientation or gender identity. Alan Turing is of course the perfect example of this. 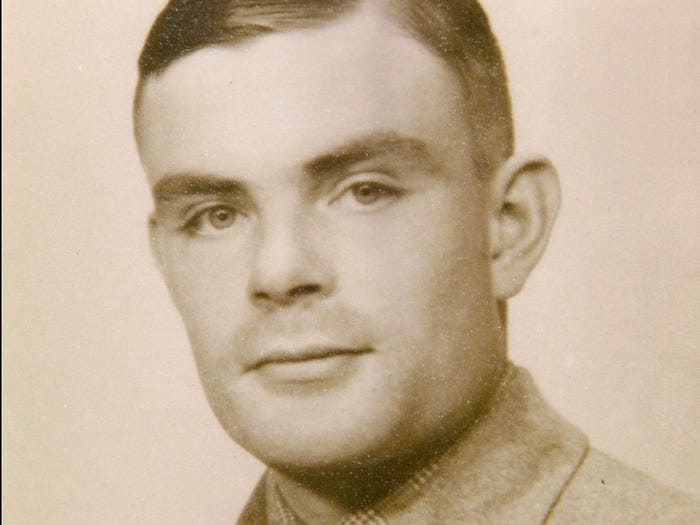 A related, albeit significantly different angle is how LGBTQI+ people have gone through History as a group. Again, this helps to connect LGBTQI+ people to the wider society. However, there are few cases where this has already been sufficiently documented such as the targeting of LGBTQI+ people by the fascist regimes in the 1930’s and 40’s. On 27th January each year, the commemorations for Holocaust victims provide an opportunity to challenge the denials and distortions of the persecution, like in this exhibition by the US Holocaust Memorial Museum. 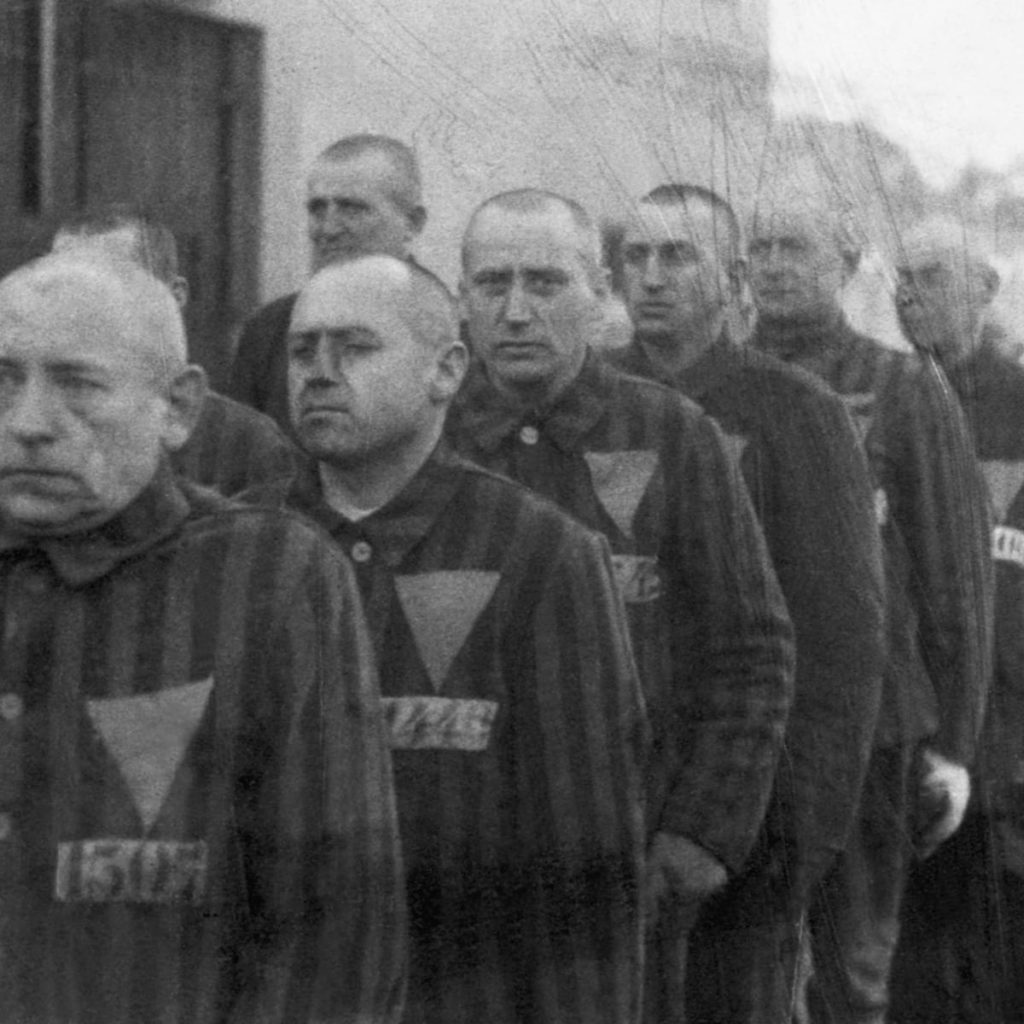 Back to the future

And what if the focus on the past was to challenge its legacy, more than celebrate it?

We’re leaving you with this video featuring Lil Nas X rapping “To create the future, you must defy the logic of the past”.