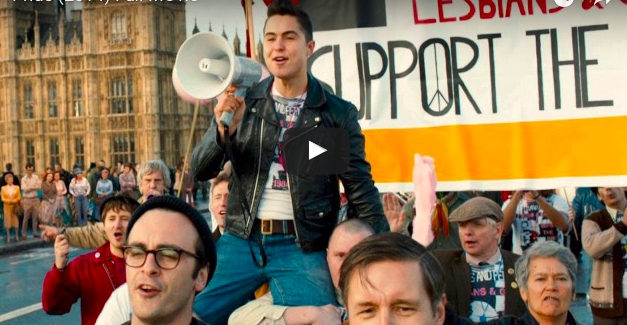 Activism is one of the most exciting human adventures. It has an emotional charge equal to love and a mix of action, humour and suspense found in the best detective stories. So it’s not surprising that some of the best campaigns of our times have been put on screen. Documentaries are obviously by far the preferred format, but some feature films have also captured the fantastic dramatic potential of campaigns.

We have compiled this selection below, in an attempt to bring you exciting material that you can get inspired by, and possibly use as material with your team and your volunteers to discuss strategies and boost its passion.

We have only focused here on social campaigns, so not on stories of how electoral campaigns are shaped. This is obviously also a fascinating area to look into and should be a separate piece of work, well worth doing  in future.

The film depicts a group of lesbian and gay activists who raised money to help families affected by the British miners’ strike in 1984, at the outset of what would become the Lesbians and Gays Support the Miners campaign. A fantastic depiction of grassroots activism, courage, alliance building, and more. Every campaigner will be totally fascinated by this incredible journey.

“To win a war you have to start one”. This adaptation of Larry Kramer’s play depicts the rise of the HIV-AIDS crisis in New York City between 1981 and 1984, as seen through the eyes of  the founder of a prominent HIV advocacy group. It’s a fascinating account not just of how a global struggle began, but also offers deep insights into how strategies are built and what drives the choice of tactics (in this case, confrontational vs soft).

From the acclaimed director Gus Van Sant comes the powerful and inspiring story of the first openly gay man to be voted into major public office in America, Harvey Milk. While mainly the story of electoral campaigning, it focuses extensively on public communication, alliance shaping and team building. All elements that are also essential for public campaigning.

ABC’s 2017 groundbreaking miniseries  introduces us to the lives, loves, and struggles of activists covering a 40-year span in  the long battle for LGBT equality.

120 Battements Par Minute is a passionately acted ensemble movie about ACT UP in France in the late 80s, the confrontational direct-action movement which demanded immediate, large-scale research into Aids. The movie compellingly combines elegy, tragedy, urgency and a defiant euphoria.

To campaigners it provides a near documentary outline of a public campaign plan, including volunteer management, direct action, media relations. Fascinating insights !

Also on access to medicines, the Dallas Buyers Club takes on the true story of accidental AIDS activist Ron Woodruff, whose cross-border smuggling network brought much-needed treatments into the hands of HIV and AIDS patients neglected by the medical establishment. The film is also a lot about how communities form, resist, survive.

In the high-stakes world of political power-brokers, Elizabeth Sloane is the most sought after and formidable lobbyist in D.C. But when taking on the most powerful opponent of her career, she finds winning may come at too high a price.

This action packed and suspens filled drama unravels the deep connections between lobbying and campaigning. A lot of strategic thinking going on.

Pablo Larraín’s Oscar nominated movie dramatises Chile’s Berlin Wall moment in 1988. It tells the full A-Z story of the campaign lead by a young advertising executive that ousted dictator Pinochet. It is not only a brilliant action and suspence-packed movie, it also is a great pedagogical material to show how values-based messaging works, where “facts and figures”-based activism doesn’t. A must-see 101 course in campaigns communication

The 2014 movie tells the story of the 1965 Selma to Montgomery voting rights marches. It sheds a powerful light on the power of  non-violence as a resistance strategy.

Mandela : A long walk to freedom

Based on South African President Nelson Mandela’s autobiography of the same name, the film chronicles his early life, coming of age, education and 27 years in prison before becoming President and working to rebuild the country’s once segregated society.

The film covers Gandhi’s life from a defining moment in 1893, as he is thrown off a South African train for being in a whites-only compartment, and concludes with his assassination and funeral in 1948. The film centres around the strategy of non-violent resistance.

Gus Van Sant continues his exploration of social struggles with this intimate and suspense-filled depiction of how a community tries to organise its resistance against the interests of big business.

The film depicts the protest in 1999, as thousands of activists arrive in Seattle, Washington in masses to protest the WTO Ministerial Conference of 1999.  The movie takes an in-depth look at several fictional characters during those five days and specifically portrays conflicts between the peaceful protesters and a minority committing property destruction whose actions were widely covered by the media.

Thank you for smoking

The story of the car manufacturer Ford’s sewing machinists strike of 1968 in Dagenham, England, which played a significant role in passing of the Equal Pay Act 1970 in the UK. (2010)

The true story of Steve Biko, leader of the Black Conscience movement killed during apartheid by South African Police in 1972, and Donal Woods, a supportive dissident journalist. A powerful film about protest, direct action, the power of the media and many more aspects of campaigning, along with a very welcome history lesson!

The Lady is the extraordinary story of Myanmar freedom fighter Aung San Suu Kyi and her husband, Michael Aris. It is also the epic story of the peaceful quest of the woman who is at the core of Myanmar’s democracy movement.

SUFFRAGETTE is the first ever feature film to tell the inspirational story of the foot soldiers of the early feminist movement who risked everything in the fight for equality. Courage and perseverance at their best!

On a similar subject, this film focuses on the American women’s suffrage movement during the 1910s and follows women’s suffrage leaders Alice Paul and Lucy Burns as they use peaceful and effective nonviolent strategies, tactics, and dialogues to revolutionize the American feminist movement to grant women the right to vote.

The Black Panther founder’s biopic includes powerful scenes of how public support played out in the fight against segregation.

Heated discussions in sight over this modern day adaptation of the ancient Greek play Lysistrata by Aristophanes, set against the backdrop of gang violence in Chicago. A most unusual campaign tactic that sees women withhold sex from their husbands as punishment for fighting. Campaigning is about finding creative ways!

Featuring an intense performance by Michael Fassbender, Hunger, about IRA member Bobby Sands’s 1981 prison hunger strike, is an unflinching, transcendent depiction of what a human being is willing to endure to be heard.

Even the rain/Tambien la lluvia

As a director and his crew shoot a controversial film about Christopher Columbus in Cochabamba, Bolivia, local people rise up against plans to privatize the water supply.

The fight for labor rights as lived and waged by latino workers in the USA. A film by Ken Loach, a longtime champion of social struggles.

Margarita with a straw

A young, wheelchair-bound woman with Cerebral Palsy moves from India to New York City to attend NYU. In the midst of this journey, she unexpectedly falls in love, but now must simultaneously navigate her desire to fit into the world around her.

While not exactly on public campaigning these films are great stories about resistance, courage, innovation and a lot more that defines campaigners. If your mood is down invite some friends over for a movie night!

While leading to revolution, it is in one sense about being called into activism and rising to the challenge…and about overcoming injustice and corruption – all themes that resonate in many/most countries around the world…Plus in Thailand they explicitly picked up the three finger salute for their protests and it was banned in real life!