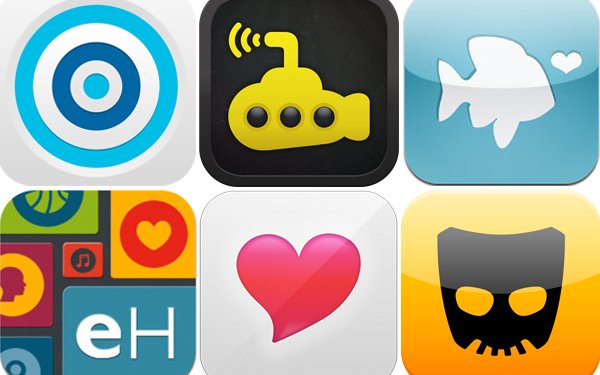 Hook up with your Activism

Dating apps are on the rise and part of most millenials’ lifestyle. How can LGBTQI+ organisations make the best use of its potential?

Tinder, the dating app that made “swipe right” and “swipe left” part of our everyday verbiage, is winning the hearts of users, advertisers and campaigners alike. The collective swiping right or left of 1.5 billion times a day of the app’s 50 million user base, 85% of which are between the ages of 18 and 34, has caught the attention of non profits looking to connect with millennials through unconventional campaigning.

How non-profits have been trying to use this potential

Dating apps have already been used quite extensively by non-profit as a communication channel to raise awareness about their action. One such example is how the Terrence Higgins Trust has extensively used Grindr and other dating apps to channel members of target groups to a free self testing for HIV scheme. According to head of digital Will Howells « By advertising the service through dating apps, we reached some of the most at risk people. » 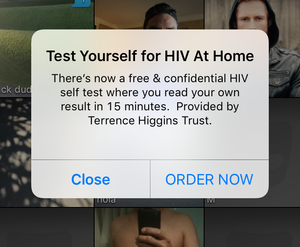 But entities who want to capture the full potential of dating sites increasingly take it one step further by developing special campaigns specifically for and on dating apps.

For example, Amnesty International Australia used the network to raise awareness about forced marriages with a campaign launched on International Women’s Day. The nonprofit replaced profile pictures with downloadable images illustrating that oppressed women around the world still aren’t able to make important choices about their lives––the kinds of choices that many of us take for granted. 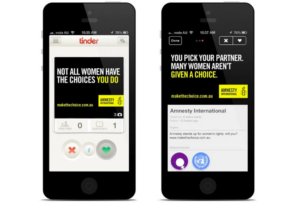 Amnesty International’s Caroline Easter described the flow of the campaign:

“The campaign was centered around International Women’s Day with the Tinder images that Amnesty posted driving traffic to the “Make a choice” website. Here, we ran a quiz in which users were asked to make choices like marry for money or marry for love. A click on money revealed a new page that explained that in rural Pakistan many girls are sold into forced marriage. Data, including email addresses was captured on the site, and interested visitors were contacted to see if they would like to support Amnesty’s human rights work.”

The advertising agency Eighty Twenty and The Immigrant Council of Ireland developed this campaign about sex trafficking. 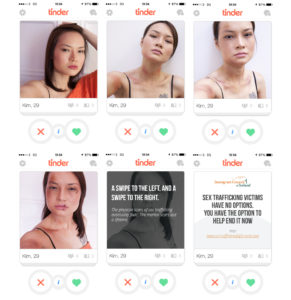 A large number of profiles on the dating app, Tinder, were created to show example stories of victims of sex trafficking. The profiles feature pictures of girls, which with every swipe illustrate the impact of sex trafficking, ending with messages related to the issues they face. According to organizers “We were mindful that we were talking to individuals in leisure mode and we were also wary that Amnesty’s messaging could come across as ‘too serious’ in such a relaxed medium. But for us, taking the chance was about generating new leads, getting users to share our messages and creating a buzz around our work on women’s rights ». The campaign eventually found that « these profiles have so far been very well received by users of Tinder, with a large number of comments from users who are shocked upon hearing about the realities of sex trafficking in a modern society. » 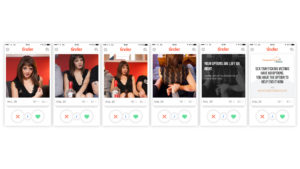 Equality Now, a global nonprofit, partnered with dating app Happn to create the “One in Three” campaign, named for the number of women who have been victims of physical or sexual abuse at some point in their lives.

How have LGBTQI been using dating apps so far?

Unlike straight dating sites, which don’t talk to a specific community and are therefore not connected to a specific cause, LGBTQ dating apps are more likely to engage in social and/or political missions.

Grindr users are of course coveted by organisations and politicians alike. Candidates from the Dutch political party Democrats 66 (D66) used Grindr as part of their 2014 local elections campaign in Amsterdam to get attention for a specific meeting on LGBTQ issues. To make sure this was explicit and targeted, the politician clearly changed his profile picture for the logo of the party. Eventually, six gay candidates turned their profile into a permanent platform to discuss their party’s program. Since then, it’s been used again for political campaigning in the USA, Australia, and other places. In the UK, Lib Dem leader Nick Clegg has reached out to voters through Grindr, Hornet and Scruff. 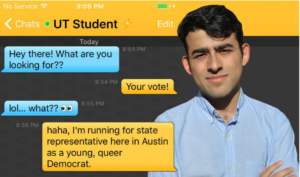 Grindr itself has also partnered with LGBTQ organizations in Peru, Colombia, the United States, and the Netherlands on their Grind the Vote program to inform users about election-related issues that directly impact LGBTQ people as they prepared to cast their votes in each country’s national elections.

Grindr launched the Grindr for Equality (G4E) program in 2012, which aims to reach men in 197 countries “not just for social networking but also for social justice,” and has since organized a wide variety of campaigns in support of global LGBTQ health and human rights. Grindr utilizes its broad subscriber base as a platform for geolocation-based messages that reach LGBTQ people at scale without sacrificing demographic tailoring.

The app regularly sends out to its users, or a selection of users depending on the relevant location and/or age range, messages developed by LGBTQ organisations which contact G4E. 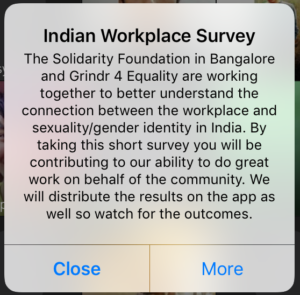 Since 2012, Grindr has for example been sending out message to their users worldwide about the International Day Against Homophobia, Transphobia and Biphobia on May 17, to raise awareness and encourage mobilisation.

While these messages are always centered on LGBTQ issues, it can sometimes spill over into issues that disproportionally concerns the community, such as colorectal cancer.

But Grindr also takes a more proactive approach and identifies issues on which they develop a more in-depth project.

In partnership with the Beijing Gender Health and Education Institute(BGHEI), an organization working to raise awareness about sexual diversity and equality in Mainland Chinese society Grindr ensured users in China have access to thorough and relevant sexual health information in colloquial Chinese.

With MOSAIC (Middle East and North Africa Organization for Services, Advocacy, Integration, and Capacity Building), a holistic program committed to improving the wellness of marginalized groups in Lebanon and throughout the region, G4E developed information towards Syrian Grindr users living in Lebanon on where to go to get refugee services that are LGBT-competent and affirming. 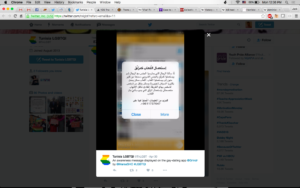 The app also obviously developed a series of calls to action following the Orlando Pulse shooting in 2016.

According to G4E Director Jack Harrison-Quintana, “the app is only at 5% of its potential. Our aim is to gradually include health and Human rights into the core needs that users expect Grindr to meet”.

And the response he gets from users is overwhelmingly positive, signaling that the community of users expects the app to get more engaged, especially in places where the context is bad for LGBTQ people.

Make sure the app is OK before you launch an action, especially if you rely on existing members and supporters to act online

Control damage and make sure your supporters don’t engage in actions that are not OK. Remember Bernie Saunders supporters were banned from Tinder for using it to campaign at their own initiative, which did far more harm than good especially as it attracted disproportionate media attention

Make sure your identity and intentions are obvious. Some commercial brands played on fooling people before revealing their true nature, which proved very unpopular. Make sure your profile, including the image, is clear, simple and bold to attract attention while being honest about your intentions

There needs to be a connection between your campaign and the dating apps essential purpose. So your campaign messaging must revolve around dating, romantic relationships, sexual liberation, etc.

Engage directly with people. While this is time-consuming, this is essential as a direct contact is what people seek on the apps in the first place

When you develop a joint action with an app, remember to send them as much feedback as possible on the action, to help them gain better insights into what works best

A great illustration of these last two lessons is given by the housing charity Shelter who had the idea of putting a brick on Tinder. As reported by Tom McCarthy, campaigns officer, « The rationale was as follows – we aren’t building enough homes, this means a lot of redundant bricks, and one by itself seems quite lonely.

A brick on Tinder could ask people to help it cement a new relationship, by getting people to call on politicians to build more affordable homes. Simple. 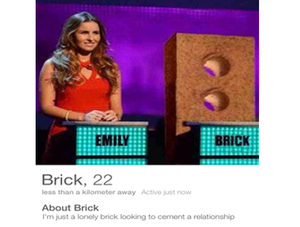 Once we got going we realised the concept did most of the work itself. We had so many puns to pick from we even set up a brick related pun matrix»

Dating apps are still only marginally used for social and political campaigning. But commercial brands, who shy less over being associated with sexuality, are increasing their outreach. This might quickly lead to a saturation of what users are willing to accept, resulting in this campaign potential shutting down before non-profits even seriously start investing it.

On the other hand uniting over a common cause is certainly one important matchmaker between people. And volunteering for the same organisation or joining the same event can be a decisive bridge between online and offline dating, which is every user’s grail. Dating app and non-profits have yet to investigate how to partner over this and maybe adapt their algorithms to take this into account.

Exactly the right time for non-profits to be part of that conversation.