(P)reaching across the divide: Campaigning on the religious front in Poland

(P)reaching across the divide: Campaigning  on the religious front in Poland

An awareness campaign targeting Catholics in Poland involved bridging divides within the LGBT community. Katarzyna Remin, board member of Kampania Przeciw Homofobii (KPH, Campaign Against Homophobia) tells us how a campaign that was long in the making contributed to breaching the anti-LGBT consensus within the Polish Catholic community.

Katarzyna, what made your organization KPH decide to address the issue of religion and homophobia?

“In 2013, we changed our public campaigning strategy to a values-based approach. Our campaign targeting parents of LGBT people focused on the value of family bonds and respect towards their children. For this campaign, we put up bus shelter posters in five cities, which drew huge media attention. Other campaigns followed, including one on the recognition of same-sex partnerships.

For a long time, KPH carefully avoided engaging discussions with the Catholic church. Some of our supporters see the church as a source of prejudice and a force so hostile that it is best not to engaged with it at all.

However, some people within KPH felt that in a country where over ninety percent of the population claims to be practicing Catholic, changing public attitudes would necessarily mean addressing these people. Campaigning would thus mean engaging Catholic values directly. Addressing the people of faith instead of the church hierarchy became a well-defined objective.”

Which allies did you identify to set up this campaign?

“Early contacts were made with Faith and Rainbow (F&R), a group of practicing LGBT Christians who work to reform the church from within. Tolerado, a LGBT-organization from Gdansk, became the third partner. Overall, it took two years to lay the first common groundwork among the three partners before we could agree on a message and a key visual of the campaign.”

How did you overcome doubts and criticism from within the LGBT community?

“We conducted a dialogue to overcome internal resistance within KPH. Also, we engaged intensively with other LGBT activists who hold more anti-religious positions, to explain KPH’s strategy and the benefits of entering in a dialogue with the Catholic church and its followers.

The benefits of this dialogue with LGBT activists before launching the campaign at large was a lesson learnt from the Irish campaign on Marriage Equality. It proved highly useful and valuable. As a result, almost all criticism from within more radical circles, which could have torpedoed the campaign from within, was avoided.”

How did you cement the relationship between the partner organizations?

“The alliance with F&R had to be built gradually as the two organisations are very different and had different interests and limits. For KPH, it was important that the campaign would not result in opposing “good” church-going LGBT people to “bad” non-believers. Faith and Rainbow had other limitations and at times it was not easy to find common ground.

KPH had the campaigning skills and the organizational strengths, but we had little knowledge of the issue or contacts within the catholic community. Because the campaign angle was not ‘natural’ for KPH, the organization found it at times difficult to make quick decisions.

F&R on the other hand had built up contacts within the catholic community over several years, but they were not even a registered organization yet, nor did they have much technical capacity. Yet F&R ’s network yielded four catholic media partners and one catholic organization as public partners of the campaign, which was a huge contribution to its impact and success.

One other key success factor was the involvement of Pawel, an openly gay, charismatic and media-friendly person of faith with experience in numerous religious movements, as one of the campaign leads.”

What was your experience with working with a PR agency for this campaign?

“It proved to be an equally lengthy process. While this was already the fourth campaign that the agency and KPH had collaborated on, the agency at first also resisted the idea of engaging with the catholic community. The first round of proposals proved unsuccessful. A second and a third round had to be conducted, taking half a year to complete.

This illustrates that an organization needs to be able to stay in the driving seat of the communications strategy, even if supported by a PR firm.”

What was the main idea of the campaign and how did you roll it out?

“Eventually, the agency came up with a very simple idea: a handshake between an LGBT person and a Christian, which the campaign coalition partners agreed on. It was also well received by the Catholic media partners, whose endorsement for the campaign was considered strategically crucial. 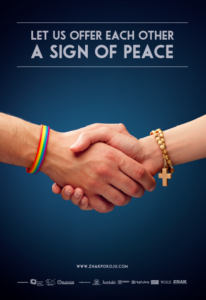 Initially, we had planned a big cultural public event. But upon earlier consultations with the Irish Yes Equality campaign and the US Freedom to Marry campaign, this was dropped in favor of videos relating positive values and human stories. These were created internally by KPH in the space of two and a half months. The fact that the campaign leaders had the necessary professional skills to conduct interviews and edit the videos was a great advantage.

10 short versions and 10 longer versions were produced. An eight-minute collage of the videos was edited, with English subtitles:

What kind of project-management did you use?

“The campaign wasn’t implemented according to a formal written plan. Rather, it was primarily carried out in constant and close collaboration between all campaign leads. A briefing paper was issued for campaign allies and other partners from the LGBT platform, to make sure the campaign messaging stayed on track. It was important to keep the campaign design within the parameters agreed on with the allied catholic magazines, one of which was more “centrist” than leftist and needed the campaign to keep to a moderate message.

How did you time the launch of the campaign?

“The initial thought was to connect it somehow to the World Youth Days, which had been held in Krakow in the presence of Pope Francis at the end of July. However, it couldn’t be too close either, as there would be no attention to the campaign. Therefore, it was decided on early September for the launch date, just after an important national holiday and the start of the new school year.

In an incredible coincidence, an advertiser contacted the campaign just then to offer quasi pro bono advertising billboards across the country Four hundred billboards went up, including five huge ones of 40 square meters. The website was launched at the same time featuring five of the ten long-format videos. Simultaneously, the team published the short versions of the videos on their Facebook page and kept uploading new ones regularly to sustain the momentum.” 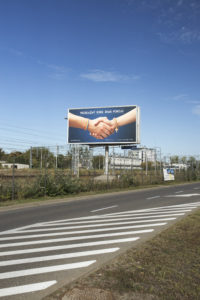 How did the Catholic community react?

“The campaign immediately got strong reactions. The first attacks came from two virulently anti-LGBT television hosts. They desperately tried to get someone from the campaign to get harassed on their shows. Our first reaction was to avoid this at all costs. The campaign leads sent messages out to all organizations and individuals asking them to resist going to these shows.

After some time, both television shows offered to abandon their usual panel discussion format in favor of a one-on-one studio conversation. Eventually, the campaign team decided that is was worth to take the risk and for Pawel and Marcin, our main contact at F&R, to accept the invitation.

How did the campaign leads handle the television interviews?

“Pawel and Marcin each chose a host whom they already knew personally from other contexts. They are both openly gay and Catholic in a very engaged way. Pawel has been going to the same church as one of the show hosts and had sung in the same choir before his coming out. While everybody was expecting Pawel and Marcin to be trashed, they both incredibly and against all odds managed to steal the show and come across as the genuine bearers of Christian values of peace, gentleness and generosity.

Can you give an example?

“Pawel, being a practicing devout Christian, had given a lot of thought to the doctrine on homosexuality and actually managed to engage in the discussion on religious arguments. On the much used ‘hate the sin not the sinner’ argument, he asked where the ‘sin’ starts, and whether, for example, bringing a cup of tea to one’s sick same-sex partner would constitute a sin. He thereby managed to break the doctrinal approach and to get people to consider the reality of a loving relationship.

To their own surprise, their TV appearance did not generate the expected wave of hate messages. Rather, these appearances brought them an avalanche of supportive messages, including even prayers from nuns.

The success of Pawel and Marcin’s appearances was due to the fact that they were both part of the target group, as well as being part of the campaign. They were people that the target group, the people who felt a conflict between their Catholic values and the Church’s virulent hateful positions, could relate to. 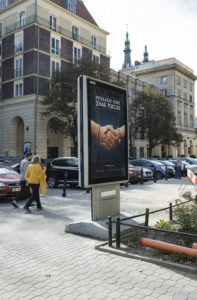 Was there any reaction from the church hierarchy?

“The official reaction from the Church was not as supportive. The very conservative archbishop of Krakow stated that the campaign was seeking to demolish the benefits of the World Youth Days, while the Bishop Conference declared that no Catholic should be part of this campaign.

The campaign clearly became an expression of the controversy between the traditional Catholic hierarchy and the leftist Catholic ‘opposition’, which most of our media partners belonged to.

Yes, all this attention generated an incredible amount of media coverage. The campaign team hired a media monitoring institute to keep track. Their report mentions 3600 neutral items, 500 negative and 300 positive ones. When checked against these items’ reach on the general public, the figures are even more compelling, with positive items far outweighing negative ones, and 80% of reach being neutral.”

Would you say this campaign changed minds within the community of faithful?

“The campaign had two major objectives: changing the mindset of the moveable middle, and getting supporters to speak out publicly. On the latter, there have been some clear signs of the effects of the campaign. For example, the team was interviewed by the national leftist paper; and a high-level cleric adopted a very supportive standpoint, even going beyond the messaging in the campaign videos.

The fact that this cleric did not get sanctioned by the authorities, signals that the campaign has started shifting the fault lines on the issue. In a similar way, a Polish nun, well known by the public for her freedom of speech and her commitment towards homeless people, endorsed the campaign publicly. After a Polish preacher released a virulently anti-LGBT video on his blog, one of the catholic partner magazines reacted spontaneously with a strong counter statement involving University experts to bust the preacher’s lies.

These are various signs that the anti-LGBT consensus is starting to crack and that the field of allies is expanding, including within Catholic circles.

A lot of support came of course from other civil society groups. Unfortunately, it remained largely off the radar of the political pundits, and politicians remained disappointingly silent.

Recently, also as a direct consequence of the ‘handshake’ campaign, the team was contacted by an advertising agency that was looking for civil society partners to launch a public campaign in favor of acceptance of minority groups. This initiative, branded “Our Daily Bread”, was directly inspired by our approach.”