This great video tells the story of the whole campaign. The text below provides further details and insights from our conversation with Stefan Sparavalo, Media and Public Relations Coordinator

For many years, when Serbs wanted to publicly shame someone, they could seek publicity via local newspapers..

Has your neighbour stolen some of your land? If so, you would immediately expose him in the newspaper section specifically reserved for such denunciations.

Has your son run away with family money and a girl you don’t approve of? You could tell everyone via these same columns that he has been disowned and exiled. 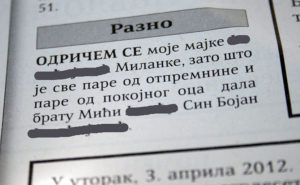 This tradition ended a while ago but it is still remembered in Serbian popular culture. It has become a popular saying to describe really bad behaviour as being “worth a mention in the classifieds”.

Public blaming and shaming has certainly been an instrument of social control for as long as the world is round, and sexual and gender minorities are definitely well placed to know the extent to which it has been used against them.

“Reclaiming” as a Campaign Strategy

When the Serbian office of the global PR agency McCann was looking for an idea for a campaign against homophobia, they decided that reclaiming this antiquated and parochial mechanism would be an ideal way to promote just the opposite: parents’ refusal to reject their child.

In partnership with LGBT group Da Se Zna, supportive parents ready to testify openly in the media were identified. Positive ads from these parents were then posted in the classified sections of the majority of national and local newspapers. 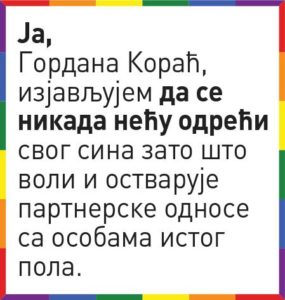 Translation: I, Gordana Korać, hereby declare I would never disown my son because he loves and lives with a person of the same sex.Instant Media Rush

A good idea always attracts attention and the uptake of the campaign was immediate. Newspapers and TV channels noticed the campaign and ran stories about supportive parents on prime time programmes.

McCann also engaged social influencers to disseminate information on the campaign, which was of course highly promoted on Da Se Zna’s social media channels, attracting thousands of likes and shares and making it their most successful campaign to date.

Framing the value of acceptance rapidly became so prominent that “Not Disowning” became the theme of this year’s Belgrade Pride.

In the future the theme could be taken even further, as a way to show that social norms are gradually shifting from rejection towards acceptance. 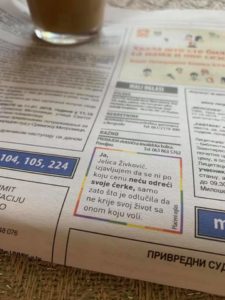 Translation: I, Jelica Živković,  hereby declare I would not disown my daughter just because she decided not to  hide the life she leads with the one she loves.

But success did not stop there. The campaign triggered responses from supportive parents across the country, who also wanted to publicly come out in support of their children. Lack of budget meant that all the messages could not be placed as ads, however, a group of these parents connected and decided to set up an organisation for the parents of LGBT children, which did not previously exist in Serbia