A Hora é Agora is a communication campaign lead by All Out in partnership with Brazilian organisations ABGLT, Beta and GADvS, designed to raise awareness, generate interest and involve the public in Brazil’s Federal Supreme Court case on whether discrimination against LGBT + people should be considered as a crime.

The cases had been stalled in the court ever since. But in November 2018, just a month after Bolsonaro’s election, the Court announced it would hear the case.

Against a background of an increase of violence and hate speech against LGBT + people, including by the pPresident who stated he would prefer “a dead son to a gay son”, Brazil’s civil society acknowledged just how strategic it was to secure a win in the courts and launched the A Hora é Agora  campaign.

Only a few months later, victory was celebrated: on June 13, the 11-member court ruled 8-3 that violence and other crimes against LGBT+ people motivated by their Sexual Orientation and/or Gender Identity or Expression should fall under the current anti-racism law until Congress passes a new law specifically including the LGBT+ community.

To understand the story behind this success, but also its challenges and achievements we interviewed Leandro Ramos, Country Director for All Out in Brazil.

In October 2018, Brazil elected one of the country’s most vocal anti-gay advocates, Jair Bolsonaro, as  President. Fuelled by his hateful rhetoric, violence against LGBT+ people and other minorities escalated across the country during the presidential campaign. Many people were verbally and physically attacked by protestors shouting Bolsonaro’s name.

All Out and its Brazilian partners of course were thinking hard on how to fight this hate wave.

Then in early November, Brazil’s Supreme Court unexpectedly announced they would discuss a case introduced in 2012 that could effectively criminalise discrimination against LGBT+ people in the country. While All Out wouldn’t normally run a campaign targeting a court case, we felt that the circumstances were too dramatic for us to not take action. We immediately contacted our partners in Brazil and started to draw up the campaign.

The main goals of the campaign were to (1) gather public support for a favourable decision by the Supreme Court, and to (2) ‘humanize’ the issue, showing the Brazilian public that violence and discrimination against LGBT+ Brazilians were real and concrete problems that needed to be addressed. 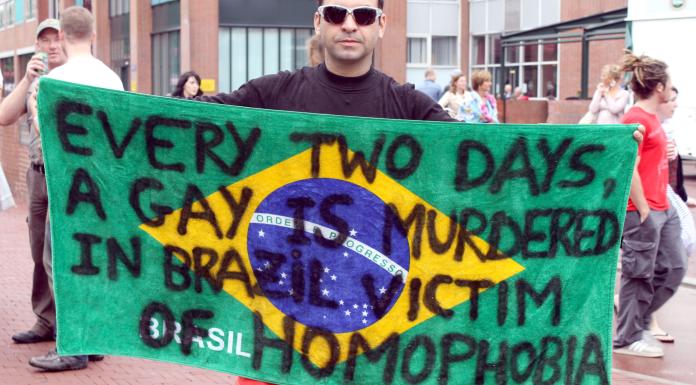 The campaign was designed and delivered in coordination with multiple partners in Brazil. It’s important to note that these core partnerships were not new: these are groups that All Out had been talking to and working with for many years. The four organizations that teamed up together on the campaign were (1) All Out, (2) GADvS (Grupo de Advogados pela Diversidade Sexual), whose representative was the lead attorney in the Supreme Court case, (3) ABGLT, Brazil’s main LGBT+ association, which introduced one of the cases being discussed by the Supreme Court, and (4) Beta, a feminist blog developed by our partner organisation Nossas.

In addition, we established new alliances to promote the campaign:

Ben & Jerry’s had picked LGBT+ rights as their social focus issue in Brazil. We had been cultivating this relationship for a couple of months earlier and saw this campaign as a key platform for engaging with them. The partnership included connecting us with local influencers and producing, posting, and promoting content about the campaign on their social channels (they have more than 8.8 million people on Facebook and around 111k on Instagram). 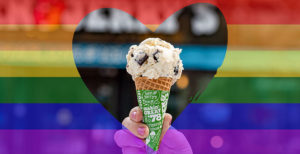 We started the campaign as we would any other All Out campaign: by drafting a campaign page and an email, telling our members what was happening and asking them to take action. In less than 72 hours, more than 100,000 people responded on the Portuguese-language page.

We also secured a meeting at the Supreme Court the day before the hearing was due to start, and we delivered our signatures directly to the Office of the Chief Justice. 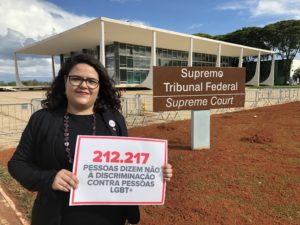 The hearing  was postponed several times, so we used that additional time to escalate the campaign. The tactics we applied included:

Translation: I had a teacher who, after learning about my sexuality, began to treat me badly, driving me away from my friends. I felt lonely because every time we went to do some kind of work or even when we had nothing to do, she wouldn’t let me sit with anyone. So I went to talk to the school principal. However, she was on the teacher’s side (I think it was because she wanted to avoid any problem)

Read all stories here (in Portuguese)

Watch it here (in Portuguese).

Watch it here (in Portuguese).

As mentioned before, the main goals of the campaign were to gather public support for a favourable decision by the Supreme Court, and to ‘humanize’ the issue, showing people that violence and discrimination against LGBT+ Brazilians were real and concrete problems that must be addressed.

One point to highlight is that unlike most of All Out’s messaging, we moved away from the ‘it’s about love’ narrative and adopted a more aggressive, ‘it’s about keeping people alive’ type of narrative. This was a conscious decision, in response to the current political climate in Brazil.

While we managed to get some celebrities and influencers to support the campaign by contacting them directly (in some cases, like with Daniela Mercury, literally walking up to them at a public event and asking them to do a video for the campaign), most of the celebrity/influencer endorsement we got was spontaneous, largely through the trending of the hashtag.

We didn’t do a great deal. Although we launched the campaign to global audiences, we really invested in building and promoting it within Brazil.

In light of the growth we had enjoyed in Brazil during the initial phases of the Supreme Court campaign, we wanted to give our membership the opportunity to mark the inauguration of the new President Jair Bolsonaro with a message of hope and resistance from the LGBT+ community. On the evening of the 2nd January 2019, Bolsonaro’s first day in office, we projected the message “We are LGBT+ and we will resist” onto multiple iconic buildings in Brasília, including the Brazilian Congress. Although this wasn’t directly related to the campaign towards the Supreme Court, we believe it had some impact on it.This action was largely funded by our membership in Brazil. See some photos of the projections here.

We saw the campaign as an opportunity to test some new approaches for All Out. While we can’t identify exactly what caused the campaign to go viral, we are confident that some of the things we did differently contributed to its success:

1) Platform and layout. We adopted a different platform, called BONDE, for the Portuguese-language version of the campaign. BONDE is a Brazilian platform developed by local campaigning group Nossas. The structure of their campaign pages allowed us to present our campaign in a more detailed and visually compelling way. It also enabled us to provide people with detailed, yet easy to understand information about the cases and the process.

2) Strategic partnerships. As previously mentioned, having a solid network of partners in Brazil, built up over many years, helped us to prepare when faced with this situation. Also, we invested significant time and effort into establishing key partnerships at local levels that helped promote the campaign.

3) Whatsapp. Last year, we launched our Whatsapp strategy in Brazil, acknowledging the importance of the platform as a campaigning tool across the country. This was the first campaign we sent to our Whatsapp list – which had around 400 members at the time. The message got more than 700 clicks, indicating that it reached almost twice the number of people who had received it (not counting anyone who may have received it but not clicked). This was the first time we included a ‘Share on Whatsapp’ ask in the call for action which appears after the petition is signed. While the numbers were not significant, that link performed much better than the other share asks on FB and TW.

4) Dedicated social media capacity. This was the first campaign we launched after hiring a Social Media Manager from Brazil. We are confident that having dedicated Portuguese-speaking social media capacity has contributed greatly to the success of the campaign. We developed more campaign content pieces, including new types of content (like a ‘True or False’ series; see examples here and here) and designed and delivered a solid strategy to promote our social media presence, adapting the targeting of different pieces of content as needed, which resulted in excellent rates of organic reach, as well as paid reach.