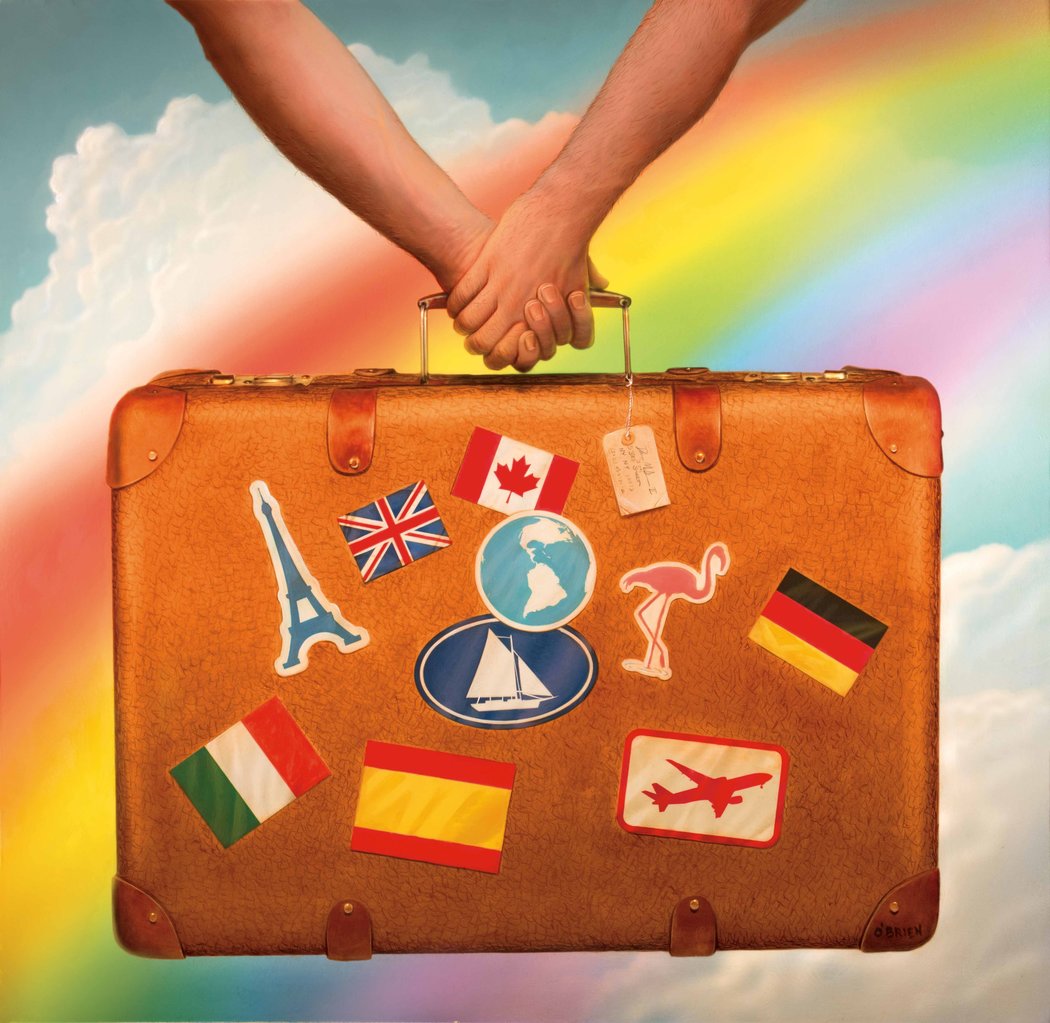 Lesbians Wish You a Safe Journey to Macedonia

This case study is a great example of how humour and positive messaging can be used to open public spaces for discussions.

It also reveals how reclaiming our identities sometimes needs to include the reclaiming of the words.

– In 2013, Skopje, the capital city of Macedonia, woke up with strange banners hanging from city bridges. Tell us what happened. “Lesbians Wish You a Safe Trip”

– We established ourselves at the end of 2012 as an activist group of women, we got established at the end of 2012. Initially, our objective was to be a support group for non-heterosexual women. Instead, the group of 5 strong and quite angry women who formed decided to use that anger to interfere in the public sphere. One of us suggested the idea of hanging banners on the bridges containing the word ‘lesbian’ (or in local language ‘lezbejka’) and after a short brainstorm, the messages were created and the action plan established. The idea behind this action was to put the word“lezbejka” in the public sphere in an interesting, engaging and yet apolitical way.

Indeed we had enough of not even being able to pronounce the word “Lezbejka” publicly, as this word is considered a “dirty” word in our context. Just to give you an idea of the situation: a local TV was horrified when a member of a talk show uttered the word “Lezbejka”, as they didn’t have the possibility to beep over the word when broadcasting. That tells you just how much stigma there is.

So we thought: Let’s start with the beginning and reclaim the word Lesbian and to transform its “filthiness” into part of our identity.

– So why did you chose the banners on bridges as a medium?

– The action came at a time when government-sponsored homophobia was at its height and the government was actively campaigning against us, virulently opposing same-sex marriage, which no one demanded in the first place, by the way. The national daily newspaper was writing homophobic front page articles for days on end.

So you can imagine that communicating via official channels such as print media, TV or radio was not an option. We had to rely on our social media, so we had to find something that would go viral. But we didn’t want to do just a meme or a poster. We wanted to make an intervention in the public space, to exist in the real world, not only virtually.

That’s when we thought that the photos of the hanging banners would make for a great viral item. And it did! – How did you decide on the message?

– Our objective was to show that in this city there is lesbian community that is not quite in-line with the image that society holds of them, and we planned to do that by putting the word lesbian in the public discourse in a funny and friendly way. It was important for us not to have any particular political demand. We didn’t even brand the action, so it wouldn’t look like a traditional protest action by one specific group. The messages included “Lesbians Welcome You to Skopje”; “Lesbians Wish you a Safe Journey”; “Lesbians Wish you a Good Day”; etc, so it was considered “cute” and a-political by the broader public

– How did you get this done?

– To avoid arrest by police, we hung the banners at 4 a.m. Police had most of them down by 8, but it was enough to get the pictures done, and it was enough for thousands of drivers to see them, and many to take pics and to post them online. We looked at the outreach and it was in the tens of thousands! A funny anecdote: one of the banners was forgotten by the police and stayed hung for 6 months!

– What was the reaction of the public?

– Actually, we were very surprised at how well this action was received. It was posted online by many people, blogs, online media and by 11 webportals, including the daily paper that had been so virulently homophobic. All of this coverage was positive or neutral, which is amazing given the context. Interestingly, there have been reactions from within the Lesbian community, criticizing us for having used the word “Lezbejka” and urging us to adopt the terminology “women who love women”.

– How do you see the impact of this action?

– Well, one effect is exactly that: allowing our community to reclaim the words that define them. If we can’t even talk about Lesbians ourselves, how can we expect the rest of society to evolve? So this action really had a deep effect on how lesbians now actually use the word themselves. Obviously, it also got our group, LezFem, better known. It surely also had an impact on the public image of lesbians in society. This friendly-funny image which we showed definitely brought us a lot of support.

– How did you assess the risks of this action?

– We decided on a format that would take us not too far outside the borders of legality. We did not damage any public good, cause any public trouble, etc. We don’t have a “propaganda” law as in Russia, so the legal risks were minimal.

We were anxious that homophobes might trace us back via social media and seek us out, but that didn’t happen, thankfully. It was a risk, which we assessed and decided to take.

– After this action, our priority was to strengthen our connection to the feminist movement so we engaged in a series of actions in partnership with other feminist activist groups. The political context was also marked by a very conservative vision of women: the only gender studies programme at the state university had been replaced by a curriculum on traditional families, the government had launched a campaign to boost birth rates and restricted abortion rights. A national programme to erect hundreds of monuments only included 3 women, one of them being Olympia, Alexander the Great’s mother, crouching under the fountain shown only as a mother and a caretaker. . So, in that context, we campaigned for the recognition of famous women and for the rehabilitation of the women who had fought the liberation against the Ottoman imperia, and during WWII. These and many others activities we had, lead us to be included as a Lesbian organisation in the national Gender Equality Platform and to be part of the Memorandum of Understanding which is about to be signed with the Ministry of Labour and Social Policy. Intersectionality is the key of our strategy. , We’ll definitely keep fighting for improving the quality of lesbian existence but we will do that with understanding of all other aspects: economic, ethnic, cultural, political etc. Challenging our own privileges to understand those among us that are doubly stigmatized such as Roma lesbians, bisexual women, trans lesbians, lesbians with disabilities, non-heterosexual women from rural areas.