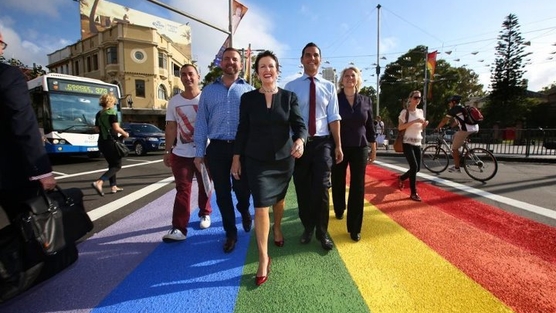 Over the Rainbow (Crossing)

There is a huge symbolism in Crossings, which can be creatively harnessed by LGBTQI activists.

On the anniversary of the Pulse Nightclub shooting in Orlando, which took 49 LGBTI lives, Atlanta’s mayor Kasim Reed announced that the city will paint crosswalks in midtown rainbow colors permanently. This action is the fruit of a campaign on Care2  started by transwoman and LGBTI advocate Sarah Rose urging the City Council of Atlanta to make the rainbow crosswalk a permanent fixture. More than twenty-two thousand people have supported this petition. 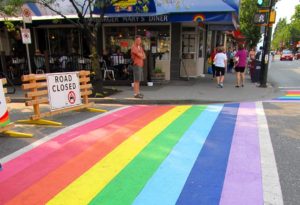 For the 2016 General Assembly, the UN Free and Equal campaign and the US government collaborated to get this amazing Rainbow Crossing done in front of the UN building. There was a huge symbolism in the fact that UN delegates from all countries, including all the countries which still criminalise same-sex conduct, had to cross this rainbow in order to access the UN. Charles Radcliffe from the UN office of the Commissioner for Human Rights expressed that this initiative served to “celebrate diversity and remind UN delegates that the fight goes on” . This action is obviously situated in a much wider strategy, involving inside lobbying with the establishment of an independent expert on LGBT issues at the Human Rights Council and public campaigning, with the ongoing Free and Equal campaign, which also seizes the opportunity of every IDAHOT to take action, mainly by launching international videos.

The idea to create rainbow crosswalks appears to have first emerged in West Hollywood as part of the 2012 Gay Pride Month celebrations. In May 2012, Tel Aviv city hall painted a crosswalk in rainbow colors to headline the Gay Pride Parade’s main concert. These photos, reminiscent of the Beatles Abbey Road album cover were posted on Facebook and the crosswalk was repainted white a few hours later.

The government in Sydney, Australia, created a temporary rainbow crossing as part of the 35th Mardi Gras celebrations, which became iconic for the LGBT community. When the city took the decision to have it removed for security reasons, people began to take matters into their own hands, by creating their own rainbow crossings out of chalk, with parents and children from several local schools chalking a rainbow in the public square at Summer Hill, as part of the DIY Rainbow Crossing movement. 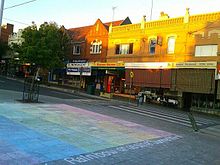 A group of families and supporters continue to chalk the rainbow, especially after rain. This group has also ensured the area remains free of litter; they also hold occasional performances and arts-related celebrations at the site. Some local businesses have offered discounts and support for the rainbow, these display a logo with a stylised image of the rainbow crossing on it. A Summer Hill Rainbow Crossing Facebook page was used to support the community protest.
The craze quickly took Australia by storm and then spread out to countless countries as well.
In 2017, the municipality of the Belgian capital Brussels set up 6 Rainbow crossings for 8 months in the gay friendly neighborhood of Saint Jaques. They were inaugurated for the Pride season, which in Brussels is set mid May to coincide with the International Day Against Homophobia, Transphobia and Biphobia 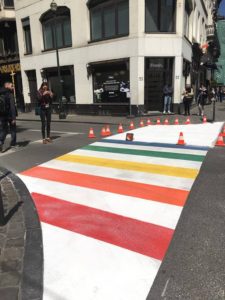 While Rainbow is an easily recognizable symbol, raising awareness on Trans issues is much more powerful when using the Trans flag, as this Canadian town did. A reportedly world premiere. Remember though that it might be necessary to have a visible explanation of the flag, as it might not be know to the general public (yet!) 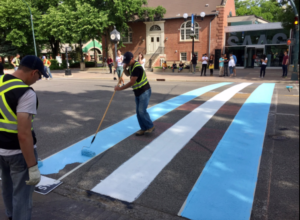 Last but not least, be aware that there are other forms of “crossings”. Our favorite is this tunnel: 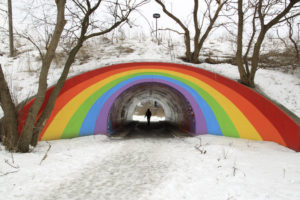 Pedestrian walkway decorated with a rainbow