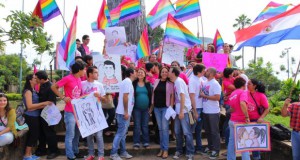 Kiss-ins are one of the easiest, most low cost, fun, and still effective actions you can organise for IDAHOT, or for other LGBTQI solidarity actions – and they can be organised at quite short notice, too!

For IDAHO 2010, activists in dozens of countries (across Asia, Latin America, Europe and North America) came together for the “Great Global Kiss-in” for May 17. Together with Gays.com, the IDAHO Committee produced a video compilation of the different kiss-ins, which they released on the day, and was shared by tens of thousands of people on social media:

But even with just a few participants, and a smart location, the results can be very popular for sharing on social media – especially since participants often work together with organisers to spread the word online. You just need to video the action and spread the word!

To help get your message heard, you could think about asking community organisations in your local town, city or country to share your video, and also encouraging participants and their friends to spread the word too. You can also create a short text or blog post (or even write a short article) which could accompany the video, to explain what the significance of the action is.

Choosing a strong location is also key – somewhere recognisable is great, such as a famous landmark or city square. Government buildings, town halls and embassies/consulates could also be interesting choices. Another idea is to hold a kiss-in at – our outside – a restaurant, bar or company in your city which has discriminated against LGBTI people, for example by not letting them show affection for each other, or by failing to take action in a case of violence or discrimination.

One neat idea is to ask people to attend dressed in their favourite colour of the pride flag – creating an assortment of bright rainbow colours on the day. Great for videos and photos. If you like, you could also choreograph the act, so that couples come together in the same colour, and line themselves up to form the six colours of the flag from left to right (red, orange, yellow, green, blue and violet). Or in the form of a rainbow arc.

Another idea is to turn the act into a flashmob style kiss-in, where one couple starts kissing, and then a few more, and then – as if naturally from amongst the crowds – suddenly tens and then hundreds of people come “out” of the crowds to kiss each other, as if a wave of love has suddenly swept people up! Especially cool for videos, and also for the reactions of people watching.

An online kiss-in is another option, where people are invited to send pictures of themselves and their partner of choice kissing – via a particular hashtag, or to your social media inbox. This could then be made into a collage of kisses for release online on the day, or as part of a community exhibition.

Kiss-in alternative? How about Rainbow Lips? One project, from Mainz in Germany, put a slightly different twist on the classic kiss-in, for IDAHOT in 2013 and 2014.

As they did, photos could either be done with different lipsticks, or by painting the different colours onto a “normal” photo afterwards, using a basic graphics programme. Once the contributions were in, they made for great campaigning visuals – like the banner in this photo!

Organised under the banner of “Kiss the Pride”, you can find out more about the campaign on their website and facebook page (in German).

“A kiss between two people is the most intimate form of contact that perfectly symbolizes their commitment to one another. Collect 365 kisses, one for each day of the year, by the International Coming Out Day 2014 (October 11), demonstrating that love is a fundamental human right regardless of gender. The purpose of the free kiss initiative is to remind us of this even after the end of Budapest Pride Week. Give a kiss for equality if you want to kiss homophobia and transphobia good-bye!”

If kissing isn’t your thing, how about a Free Hugs Event or a Hand-Holding Flashmob? Similar choices with love, expression, visibility, community well-being at their heart too.