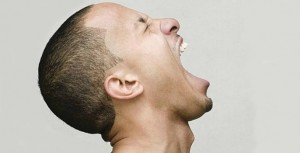 Rather than hold a one minute silence, why not hold a One Minute’s Noise, or Shout Against Hate for May 17? Maybe it makes more sense to do an act where people really unleash their emotions and make themselves heard, rather than stay quiet?

Activists who have taken part in these events report that the atmosphere can become electric – much more than they had imagined – revealing the hidden (or until then silent) power of collective passion for change. It’s also a really simple (and free) event to organise, especially on short notice, and can be easily added on to other actions around the Day (for example, at the start or end of a march, or day of community actions).

Some ways to increase the noise include blowing whistles, beating drums, banging on pots and pans (or other everyday household objects), singing or shouting in chorus, using megaphones, microphones or a stereo, or bringing along your musical instrument of choice.

Check out this video of a One Minute Noise / Shout Against Hate, from IDAHOT 2014, by Transvanilla in Budapest, Hungary.

It could also be held in a local or private space, such as a community centre, perhaps as an ‘ice breaker’ before other events (therefore helping everyone to feel more at ease to express themselves, having participated in this collective act to start with).

Or you could hold it in a public space (in a city square or outside a state building), or as part of a community show or performance for May 17 – encouraging the audience to raise their voices in concert.

The atmosphere could obviously be fun or, actually, it could be solemn – with people really venting their emotions, and shouting from the heart. It could be about unleashing and channeling people’s anger and hurt about injustice into something positive, vocal and collective.

A Shout Against Hate could also take the form of a (filmed) flashmob, where one person starts, and then others – seemingly randomly – start joining in, before – after a while – hundreds of people are joined in a massive Shout Against Hate !

elarus, considered the last dictatorship in Europe, is a pretty difficult place to mobilise. Protests aren’t exactly encouraged by the government. So protesters found a new way to express discontent. Gathering together in a square and clapping. They weren’t protesting: just clapping. Tactics like this don’t need signs, equipment, or specialist expertise so they can also be used as a way to get around security issues in more oppressive contexts. Anyone can get involved and it seems absurd that stopping people clapping is a priority of the security forces which can help strengthen your position. READ MORE 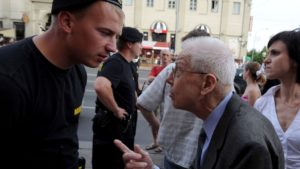 Towards the end of Milosevic’s presidency, many Serbians were getting fed up of his sticking around and the corruption in which they believed his government was involved. But it was difficult to protest and get the message out there and people felt nervous. So they came up with their barrel idea to make a mockery of their leader and leave the authorities in an impossible position. The barrel asked people to donate a coin to Milosevic’s retirement fund and in exchange they could hit the barrel, with an image of Milosevic, with a baton. The police took the barrel away but they group released a story to the press that the funds had been collected playing into the idea that Milosevic would retire. This clever tactic was a win-win for campaigners and used humour and political satire to push for change. MORE INFO HERE

In Lebanon, protesting can be difficult to organise due to restrictions imposed. In this tactic, Lebanese activists dispersed around the parliamentary building and carried out a disruptive noisy protest – honking small personal horns, that were easy to sneak past police check-points. Sometimes protests with big banners and signs are impossible or might put activists at risk of detention or the protest being stopped by authorities so considering using tools in your protest that are small and inexpensive can help more people be involved, help your protest spread and make it much hard to control or contain by authorities. MORE INFO

But silence remains also an amazing tool for protest !

After police violently evicted protesters from Gezi Park, Turkish choreographer Erdem Gunduz took to the streets – to stand alone in Taksim Square, Istanbul, on June 17, 2013. His presence there quickly went viral on Twitter and, within hours, hundreds joined him in silent solidarity. Turkish police later cleared the square and arrested several demonstrators. The next day hundreds more came back.

The idea is really simple: people can get together on May 17 in a public space, not to explicitly hold a ‘protest’, ‘demonstration’ or ‘march’, but to just stand still and/or just talk to one another.

Because it’s not exactly a protest – just a group of people who’ve come together to stand around and talk – it makes it difficult for police to justify dispersing crowds or arresting people. After all, why would a supposedly democratic state arrest people for just talking, or just happening to be together in a public space?

Symbolically, it’s a powerful way to speak up about restrictions on freedoms of expression, assembly and association, and to practically challenge those restrictions at the same time.

Whilst the tactic is designed to work well in places where police repression is likely, it could also make for a thought provoking act of solidarity in places where people do enjoy the right to freely express themselves, and to protest in public.

And even in some really open contexts, where recent crackdowns on freedoms of assembly make public demonstrations difficult (e.g. the UK), it could be a good way for LGBT communities to use May 17 to provoke debate about wider democratic freedoms.

It should also provoke interest from pubic and media. People passing by should be interested in why on everyone has suddenly stopped in the streets and started talking to each other? A good way to amplify the message is to build the action up on social media before hand, and make sure to have plenty of people ready to post live updates.

Use the hashtag #JustTalkin (and #IDAHOT) to help get your message out on the Day.