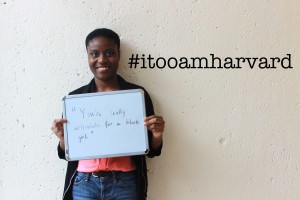 Stereotypes fuel discrimination and can make daily life much harder for minority groups. In Australia, an LGBT youth group, turned stereotypes and prejudice on their head and made it really clear just how ludicrous are some of the questions they have been asked about their lives. It’s a tactic focused on changing discriminatory behaviour and the micro-aggressions LGBT people face every day. Each sign highlights just how absurd many comments are and makes the audience rethink how they might speak and behave in future.

I am an immigrant

This simple message that immigrants contribute to society is presented in a matter of fact but personal sense of story through these posters. There are no specific policy messages or campaign asks – it much more about presenting one person to another and making people rethink assumptions and stereotypes about immigrants. This example shows how sometimes keeping things simple and personal can be really effective.READ MORE 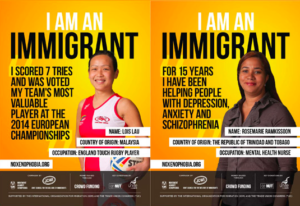 This poster campaign shocks us as the audience into recognising the conscious or unconscious bias we might carry around with us – and even if that’s not what a person takes away from the poster, it’s a powerful reminder of the inequality that people experience in work and daily life because of their race or ethnicity. More info HERE 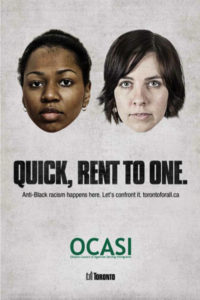 I, Too, Am Harvard

I, Too, Am Harvard was a campaign expressed through a collection of photos that had been posted on Tumblr to illustrate the personal experiences of black students at Harvard University. The multimedia project was the result of interviews with over 60 Harvard undergraduate students holding signs and bearing messages about their experiences as Black students of Harvard.

The campaign, as well as the concept spread to other universities including the University of Oxford, University of Cambridge, and McGill University, and eventually reached to over 32 universities worldwide, with minority students, presenting their experiences as Asian/Indian/Muslim/etc. in their universities.

The purpose of this campaign is to simply provide the voice and the human face of the marginalization, the stereotyping, and the racial microaggresions these Black (and other minority) students experienced. As long as complex issues are being addressed in discussions and debates, these issues will only remain abstract or theoretical notions, rather than actually being applied to living experiences and realities as human beings. The daily effects of marginalization, systemic discrimination, and oppression experienced by this group will be rendered into academic terms without any actual consideration nor concern.

Hopefully, by presenting a more personal statement, especially to those that illustrate the emotional weight and mental impacts of those daily effects, it will help others truly realize that apart from “I, Too, Am Harvard”, the most important aspect of the campaign is:

“I, Too, Am a Human Being; Deserving of His/Her Rights and Respect, Equally as You.”

The next anti-racism campaign was launched in response to the George Zimmerman not guilty verdict of the death of Trayvon Martin, a 17-year old African-American, who was fatally shot by Zimmerman.

Launched by Essence magazine, a monthly magazine for African-American women, #HeIsNotASuspect, was organized as a counter-stereotyping social media campaign to stop racial profiling.

The following was their statement on the campaign:

“We launched our first-ever counter-stereotyping social media campaign to stop racial profiling, #HeIsNotASuspect. We were determined to alter mindsets and present positive images that prove our Black boys and men are so much more than a stereotype.”

Also, the magazine invited their readers — the mothers, sisters, daughters, and grandmothers — the African-American women (who are often the unacknowledged victims of violence against African-American men) to post images of the men in their families/lives accompanied with a few words about them and the hashtag, #HeIsNotASuspect across various social media platforms, especially Twitter and Instagram.

So, similarly like the “I, Too, Am Harvard” campaign, this action also tries to humanize a minority racial group in America, and most importantly, to raise awareness of the most deadly impact of racial stereotyping — the loss of lives of African-American men.

Below are a couple of the tweets from the community response in support of the campaign.