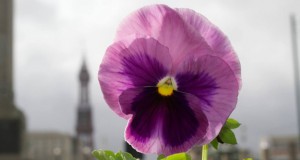 In recent years, “guerrilla gardening” has become a popular term for people planting flowers and trees as a symbol of protest, and as a way of coming together as a community, to reclaim public spaces. When a single flower blooms, in a place marked by hatred, a symbol of hope stands out, and proud. It is a “gesture of quiet resistance”, explains Artist and creator of the Pansy Project, Paul Harfleet…

“Artist Paul Harfleet plants pansies at the site of homophobic abuse, he finds the nearest source of soil to where the incident occurred and generally without civic permission plants one unmarked pansy. The flower is then photographed in it’s location and posted on this website, the image is entitled after the abuse. Titles like “Let’s kill the Bati-Man!” and “Fucking Faggot!” reveal a frequent reality of gay experience which often goes unreported to authorities and by the media.

This simple action operates as a gesture of quiet resistance, some pansies flourish and others wilt in urban hedgerows. The artist began by planting pansies to mark his own experience of homophobia on the streets of Manchester (UK) though he plants pansies for others both on an individual basis and as part of various festivals and events. Perhaps most poignantly The Pansy Project also marks locations where people have been killed as a result of homophobic attack, for example a pansy for Michael Causer who was murdered in Liverpool in 2008.” – from The Pansy Project

Paul, and other ‘guerrilla gardeners’ in various countries, have often taken these kind of actions to mark the International Day Against Homophobia & Transphobia. In 2013, for example, Pansy Project workshops and acts happened for May 17 in places as diverse as the UK, South Africa and South Korea. Meanwhile, in 2014, the Pansies were planted for the IDAHOT in Bristol, London and Brussels. Guerrilla Gardening in for IDAHOT 2013, in the Jongro area of Seoul, South Korea, by the Korean Gay Men’s Human Rights Group

Pansies are a significant choice of flower because, in English, a “pansy” is also a (quite old fashioned) slur for “gay”. So the planting of pansies, as symbols of hope against LGBT violence and discrimination, also works to turn that prejudiced meaning around. The same is true in various languages. In Spanish, for example, the pansy is called “el pensamiento” (deep thought) and is also used as a slur for feminine, gay or bisexual men. In French, the flower is also associated with thinking and thought (la pensée), as well as male femininity or homosexuality. In Portuguese the flower is called “amor-perfeito” (perfect love), and carries connotations of feminine and queer as well.

Pansies are also usually quite cheap to buy, and May is a great time to plant them!

Other flowers might also be meaningful choices in your context, or depending on the issues you want to address. From roses, daffodils and tulips, to sunflowers, orchids and lilies, you can find out about plant symbolism in this handy Wikipedia page. And, meanings often vary by culture, Hanakotoba is the Japanese language of flowers, for example.

Planting a tree or seeds

Planting a tree or sewing seeds together, as a community, might also be an interesting group activity to mark May 17, and to leave the mark of your fight against hatred for the future. Like with the Pansy Project, this could be done as an act of remembrance, and hope against hate, at the site of a hate crime. Or you could do your planting as an act of community expression and way of coming together, in a public park for example.

Another option could be to plant flowers in a meaningful shape or form, such as a heart, or to plant different coloured flowers together, in separate rows, to make up the colours of the rainbow flag.

When David Morley was killed in a homophobic hate crime in London in 2007, Paul planted a thin pink line of 3,000 pansies along London’s Southbank in a form which traced his last steps. ‘Pansy! For David Morley’. Courtesy of The Pansy Project

Because this is an act of adding something to public spaces, it is probably unlikely to be met with repression, or to require permission from the police or from local authorities.

So, where freedom of expression, assembly and association for LGBTI communities are limited, ‘guerrilla gardening’ can offer a significant – and effective – way of expressing yourself and making your mark, visually (and ecologically), in a public space, without it being repressed as a ‘protest’.

Please do, however, consider these risks in your own context.

Another way to do a similar kind of act is to get people together in a disused or uncared for public space, where there is soil to plant with or ground to use, and to ‘occupy’ the space with gardening activities (which could also include clearing up, sculpture or other crafts activities, the adding of a public bench or seating, etc.). In São Paulo, Brazil, for example, there is a whole movement of people who come together to do this on certain days, and it is also a way of bringing people together from different generations.

For more information including tips on how to select your site, how to make your planting, and how to take the best possible photos, see the Pansy Project website!

And remember to send us a picture of your event at contact@dayagainsthomophobia.org or www.facebook.com/may17idahot, so we can share it more widely. If you’re organising for May 17, you can also use the hashtags #PansyProject and #IDAHOT to help get your message out.