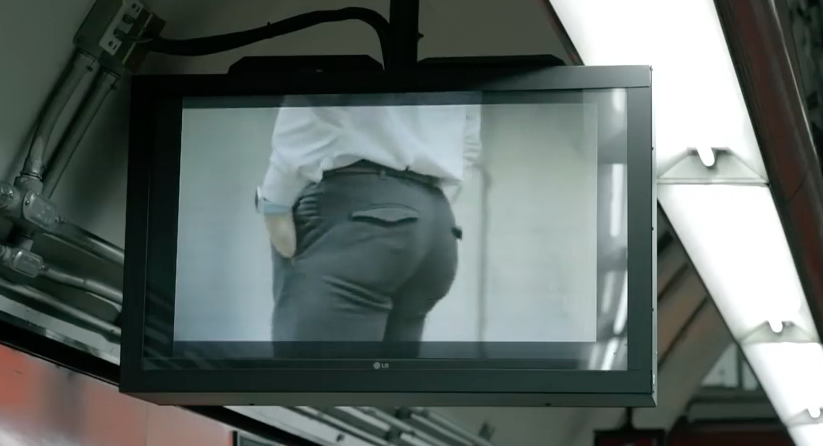 This is one of the best campaigns we’ve seen on this theme!

The look of the woman at the very end of the second video is in itself reason enough to watch these two very short pieces.

Article carried over from NY Times

A seat in a subway car in Mexico City’s metro system caused a stir earlier this year. There were awkward glances. Visible discomfort. Baffled looks. Some laughs. And of course, the inevitable pictures from passengers’ camera phones.

It was meant to be provocative, and it was. A seat was changed to look like the lower half of a male’s body, including the penis, part of a campaign by UN Women and the Mexico City government to raise awareness about sexual harassment on subways.

On the floor beneath the seat, there was a sign reading, “It is annoying to travel this way, but not compared to the sexual violence women suffer in their daily commutes.”

The campaign has now released a video titled “Experimento Asiento” — “an experiment with a seat” — that has had more than 800,000 views on YouTube since March 20. It shows people reacting with a mixture of discomfort and shock throughout. One man even tried to cover the seat with a coat to sit on it. It didn’t work. He abandoned the seat, as did others who tried to sit in it during the experiment in January.

UN Women and the Mexican government collaborated on a second video as well, which has also begun picking up traffic. It is called “Experimento Pantallas” — or “experiment screens.”

That experiment involved installing cameras that would take tight shots of male buttocks and display them on screens for all to see. In the video, a number of men are shown expressing disgust and embarrassment.

“We wanted to do something different,” said a Yeliz Osman, a program coordinator with the Mexican UN Women office. “We wanted to target men because on a global level, the majority of programs talking about sexual violence or sexual harassment always target women and girls. We wanted to change that because we don’t think that women are the problem.”

The campaign is called #NoEsDeHombres (a rough translation would be “this isn’t manly”), and it is aimed at men, both with the video ads and with newly unveiled print ones that show guys giving lascivious looks with slogans like “this is how your mother gets looked at every day.”

These particular ads came about after UN Women and the Mexican government took open submissions for ideas on a campaign to target a male audience. Around 40 agencies submitted pitches and J. Walter Thompson won.

“We need to make clear that this is violent, not flattering, and incentivize men to intervene if they witness it”, said Ana Güemez, director of the Mexican UN Women office, during the presentation of the campaign this Thursday.

According to a national survey done in 2016 by the Mexican Institute of Women, Inmujeres, nine out of 10 women or girls who use public transportation feel unsafe while doing it. A wide-ranging Reuters survey done in 2014 also showed that the Mexico City transport system is the second-most dangerous for women overall out of 15 world capitals. However, Mexico City was squarely in first place for specific questions like “have your been verbally harassed?” or “have you been groped?“

“In order to generate change, you need to create empathy,” Ms. Osman said. “The idea is that men can get a sense of what it is all like. By creating empathy, we hope that this might change their behavior.”

The Mexico City government has begun to take action: It is now possible to file an administrative complaint if you get catcalled (the perpetrator either pays a fine or spends a night in jail), and last year it started handing out rape whistles on the subway so that women could “warn of possible crimes” (a plan that was not without its critics).

The issue has gained prominence in the past few weeks after a well-known blogger, Tamara de Anda, was publicly criticized for talking about filing a complaint against a taxi driver who accosted her verbally while she was walking down the street. Insults on social media ranged from telling her she wasn’t attractive enough to be offended by the driver’s catcall to issuing death threats.

Ms. De Anda was one of several Mexican public figures who participated in the presentation of the #NoEsDeHombres campaign, alongside the wrestler El Hijo del Santo and the actor Alfonso Herrera, familiar to United States audiences from Netflix’s show, “Sense8.”