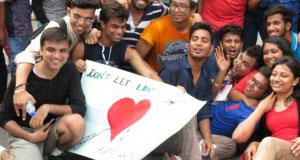 Shashank, a business development professional in a consulting firm; is one of the core team member of the queer collective called Harmless Hugs which is currently operating in Delhi and Kolkata. Harmless Hugs is a queer collective which was founded in 2012. It is an expansive space driven by core values of unity in diversity and coexistence. Raising over tags, its vision is to create a collaborative culture that focuses on free and fair human expression. Where/how did the idea originate (your own idea, an idea seen in another place ? was there a lot of dispute around this idea inside the groups) ?

Actually few months back Harmless Hugs hosted a unique event called Queer Hugs where member of Harmless Hugs walked through the streets of the Business District of Delhi, Connaught place, with the placards “I am queer will you hug me?” We got an amazing response from the people who hugged us and supported the freedom of expression and LGBT rights. After the event was over we were happy and all of a sudden the impulse of hosting a queer flash mob came into picture. Hence we decided to host the first-ever “Queer Flash-mob” in Delhi. The idea of hosting the flash mob was inspired by queer flash mobs that were conducted in Mumbai over the past few years. Hence we thought of having such a flash mob in Delhi too.

What were the main expectations in terms of outcomes (media attention, public attendance, academic interest?

The expectation of the event was primarily associated with marking the presence of the queer community in India. India is a conservative society and the old Victorian law section 377 considers homosexual intercourse as a criminal offence in India. As a result many people live in the closet. Hence the members of Harmless Hugs decided to do something which is spectacular and could bring the smile on the faces of people and connect with the general public. The video of flash mob quickly went viral on Youtube and we hope this will inspire others to do similar initiatives.

Soon after we were done with the flash mob we distributed parchas (pamphlets) which conveyed the message to general public about the rights of the LGBT people. We got a great support from the people who supported the initiative and we are quite positive it contributed to develop an understanding attitude towards the LGBT community. What were the risks/threats involved and how did you mitigate them (counter demonstrations, police harassment, media indifference, etc.)?

The task of hosting the flash mob was not easy, over the past three months we faced several challenges such as gathering volunteers, then building resources such as finding a choreographer, looking for a studio, gathering funds and getting permission from authorities to do the flash mob in Connaught Place.

Though over the period of three months we were able to get everything done, we had to face a major setback from Delhi Police who refused to give us permission to host the flash mob just two days before the event, despite previous assurance. After hours of requesting they decided to give us permission but with the change in timing. Hence we had to change the timings of the event and had to conduct it in the early morning instead of evening.

One thing I would like to highlight is the overwhelming support from Aam Admi Party which helped us in hosting the event effectively and also provided support from their flash mob team called “Dance for Democracy”.

How did you get it done ? How much time did it take ? how much did it cost ? how many people did it involved ?

The first task for the flash mob was to call for volunteers who would be comfortable with being visible on video. Thus we invited application from volunteers in the Harmless Hugs Facebook group and page. Soon we got a good number of applicants who wanted to be a part of it. It took us around 3 months of practice to finally host the event.

What advice would you give to other people who’d like to undertake this activity ?

Well the only advice that I would like to give the people is to have the courage and work as a community. The battle is a long road. There is a greater need for developing an understanding among the members of the queer community to be supportive towards each other.