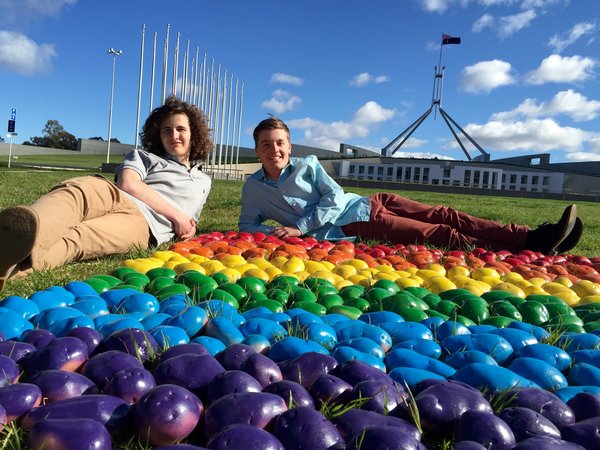 Chip in with a Potato

Australian students Will Richards, 18, and Daniel Butson, 16, crafted a giant rainbow flag made out of 1,000 potatoes to support same-sex marriage rights in their home country. The pair spent two days spray painting the potatoes in six different colors for the massive project, which cost them $1,500 and was displayed on the lawn of Parliament House in Canberra, according to BuzzFeed.

As it turns out, the two teens are pros when it comes to sending spud-centric memos — their side business, Potato Messenger, delivers potatoes printed with 140-character messages on them anywhere in Australia.

Richards and Butson told BuzzFeed they are angered by their government’s reluctance to embrace marriage equality. Even though an estimated two-thirds of Australians support same-sex marriage, Prime Minister Malcolm Turnbull has said he will maintain a plan outlined by his predecessor, Tony Abbott, that includes a public vote on the issue which won’t take place until 2017.

“We decided to use some of our funds to create something that had a true impact,” Richards told BuzzFeed. “We believe the government’s decision to prolong marriage equality in Australia is unjust, and that the legislation should simply be passed through parliament.”

It’s definitely a starchy way to make a statement, but we love it!