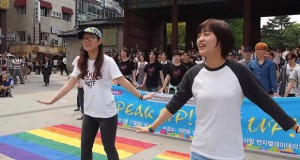 What better way to tune in to the global chorus for LGBTI freedom and equality, but a sing-in? Together, we can promote global harmonies!

As Georgia O’Keeffe once said, ‘Singing has always seemed to me the most perfect means of expression. It is so spontaneous… Since I cannot sing, I paint…’

But you could sing! Whatever your ability! Lesbian, Gay, Bi and Trans community choirs often mark the International Day Against Homophobia & Transphobia, and community groups – or even just groups of friends – who want to have a good sing as well.

This sort of action could work well if you wanted to perform as part of a local community event – as one attraction, as part of a larger series of events. It could also work well as a video/online action where, once you’re ready, you can record your performance, upload it online and share it with your friends, local community and the world!

This sort of action could work particularly well for community groups who are looking for a well-being action, with community building – as well as visibility (or audibility!) – at its heart.

This is easy enough to organise if you are part of a community choir, but what if you’re not, and you want to get involved?

Alternatively, you could work on this together as a small group, in a more DIY style !

You could simply choose a particular song (rather than people having to study sheet music) and start singing along with it playing, together with a handful of friends or colleagues. Once you’ve sung together a few times, you could then start singing without the song in the background. Once you are happy, you could then introduce some different harmonies, or more complex arrangements.

You could either work this out collectively, or invite one of you to lead the arrangement (or take it in turns). Once you are happy with everything you could just call it a rap (and get ready to record/perform) or you could then invite others to join the song, if you would like to.

You can find more information at choralnet, and on Wikihow, amongst many other resources out there!

You might also find some inspiration below – a quick round-up of different singing projects that have been organised for IDAHOT around the world.

For May 17, 2012, the Sydney Gay and Lesbian Choir led the organisation of a worldwide virtual sing-in, with online participation from choirs, musicians and individuals around the world – under the banner of the OutPost Choir project. Singing along to the specially created song, You Make Me Proud, you can watch the video compilation here:

For May 17, 2013, 116 people of totally different abilities, gathered together with the Korean Gay Men’s Human Rights Choir in South Korea, to sing ‘You Make Me Proud’ once again.

The London Gay Men’s Chorus also joined the staff of Gay Star News, and the London Gay Big Band in 2013, to sing their hearts out as part of the Global Rainbow Flashmob campaign for that year. Choirs in Ireland, France and Canada also marked May 17 in 2013, by singing in Cathedrals !

In 2014, over 20 different choirs and musicians – from 14 different countries – came together once again to commemorate the IDAHOT 2014, this time as part of a Global Sing-in for the Day.

For more inspiration on how to use singing for social protest, read this excellent article from the WagingNonViolence project