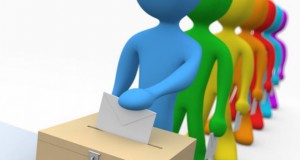 Under this theme, the Icelandic organisation Samtökin ’78 used the occasion of IDAHOT 2014 to question the candidates for the upcoming elections about their stands on LGBTIQ issues & Human Rights. Therefore, they had organised a panel discussion with the candidates to discuss their thoughts and ideas on queer issues, especially touching topics of human rights for LGBTIQ people. Putting your candidates for elections on the spot and inform the public about their stands on LGBTI Rights can be a powerful tool for a political change in your country, region or even worldwide.

Especially in the context of the European elections, LGBTI organisation in various parts of Europe addressed the importance of including the situation of LGBTI people in Europe and worldwide in the political agenda of the parties and pushed for commitments to Human Rights with regards to SOGI (sexual orientation and gender identity).

We have picked out some examples below, to show a few ideas on how to push and advocate for LGBTI Human Rights during elections.

ILGA Europe launched the campaign Come Out – European Elections 2014, targeting and engaging voters, as well as MEP’s. The focus’ of the campaign were: To inform and push for enhancement of LGBTI equality and Human Rights, to strengthen EU’s position in the struggle against homophobic and transphobic backlash in Europe and to raise awareness of the importance of voting for all defenders of LGBTI Human Rights.
The organisation, together with their members, wrote a pledge which they presented to the candidates standing for the European elections.

ILGA-Europe and its members approached the candidates and inviting them to sign our 10 points Come Out 2014 European Election Pledge. The Pledge summarises the key issues that ILGA-Europe wants to see advanced at the European Union level over the next five years.

Furthermore, ILGA Europe reached out to their members and individuals and encouraged them firstly, to inform themselves about the political agenda of the various parliamentarians and candidates, and secondly to address the candidates who have not signed the pledge and ask them why they have not done so. And thirdly, to raise awareness of the elections and the candidates’ position amongst their friends, family and colleagues.

ILGA Europe also held a panel discussion with representatives of various political parties prior to the elections where activists, journalists and members of the public were able to ask questions and discuss their demands with the politicians. Additionally, ILGA Europe published a video in which MEP’s, activists and opinion leaders stated their vision and view on LGBTI Rights and the European elections. In Greece, the groups Athens Pride and Colour Youth – LGBTQ Community of Athens launched the ʺVote for your rightsʺ awareness raising campaign. Prior to the elections, they asked their supporters to send in their statements which were then carried on placards around the historic city centre of Athens on May 17.

In Bulgaria, Bilitis and the Bulgarian Helsinki Committee had also organised a discussion round with MEP candidate from Reformatorski Block (Reform Block Coalition) and Genady Kondarev, one of the founders of Zelenite Political Party (the Greens), on a broad range of issues concerning LGBTI people. Other candidates sent letters of commitment to the issues.