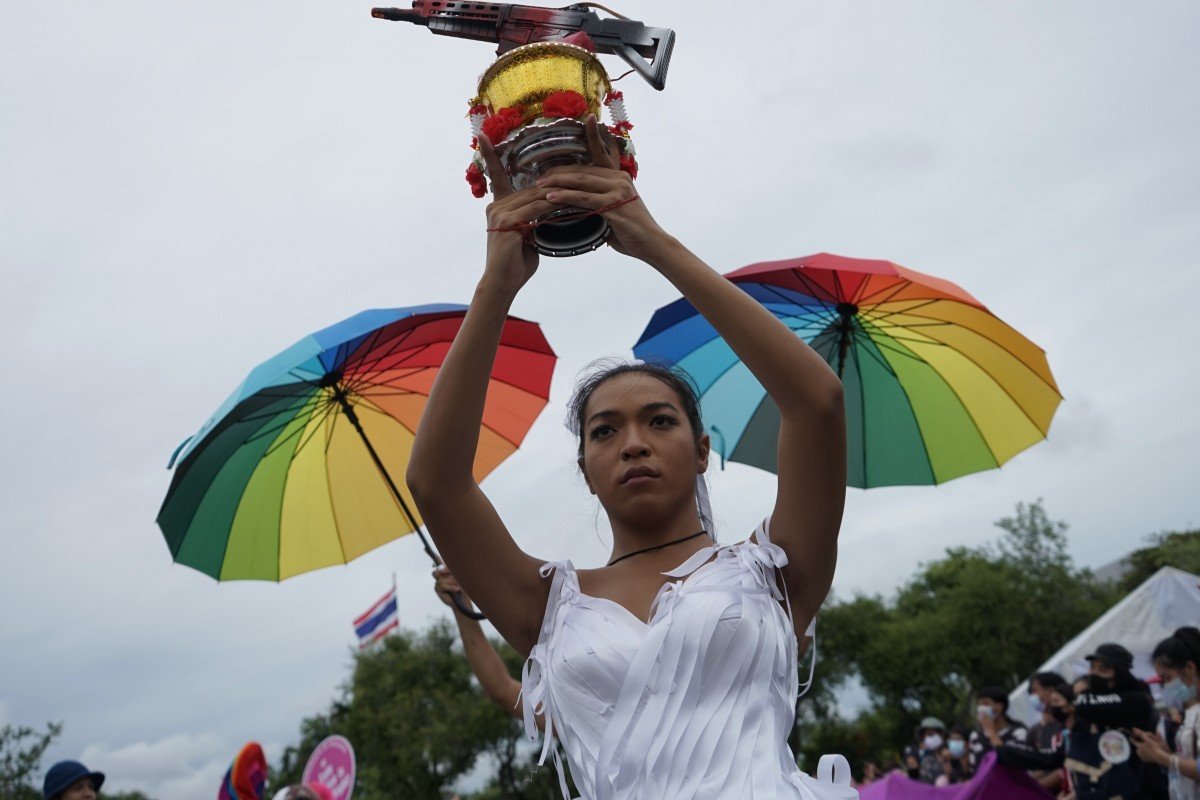 Rise and Shine: When Sexual and Gender Minorities fuel protests for Democracy in Thailand

This article first appeared on the South China Morning Post 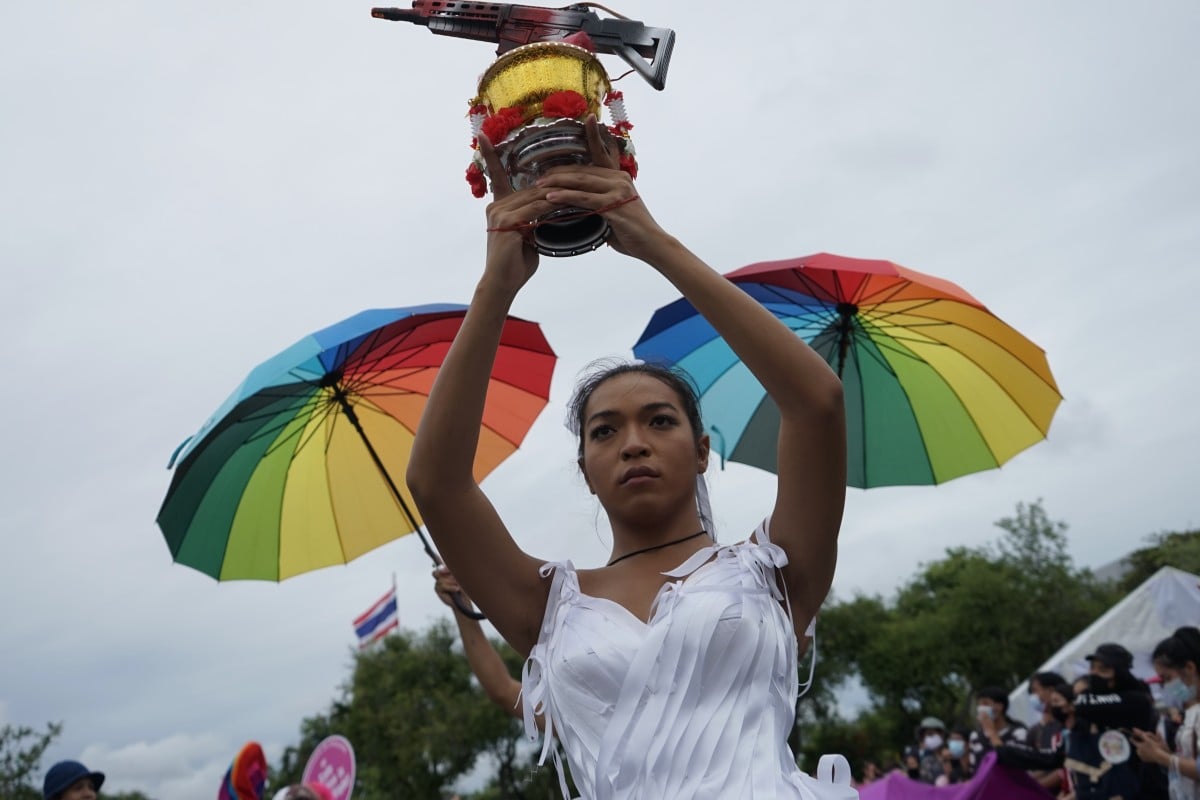 For the weekend rally just past, she put on a ribboned wedding dress – in a strike at both the kingdom’s lack of democracy and laws which stop short of giving the  LGBTQ   community full rights in same-sex unions.

“Democracy brings rights,” said Angele, who brought an offering bowl with a machine gun representing the military’s hold on power to complete her outfit, which included many white ribbons – one of the symbols of the democracy movement.

“We look at  Taiwan and how they have led Asia on the marriage issue,” Angele said. “Here, the law still doesn’t match what people are thinking. So you see many LGBTQ activists, because protests give us the space to speak out and show who we are.”
. 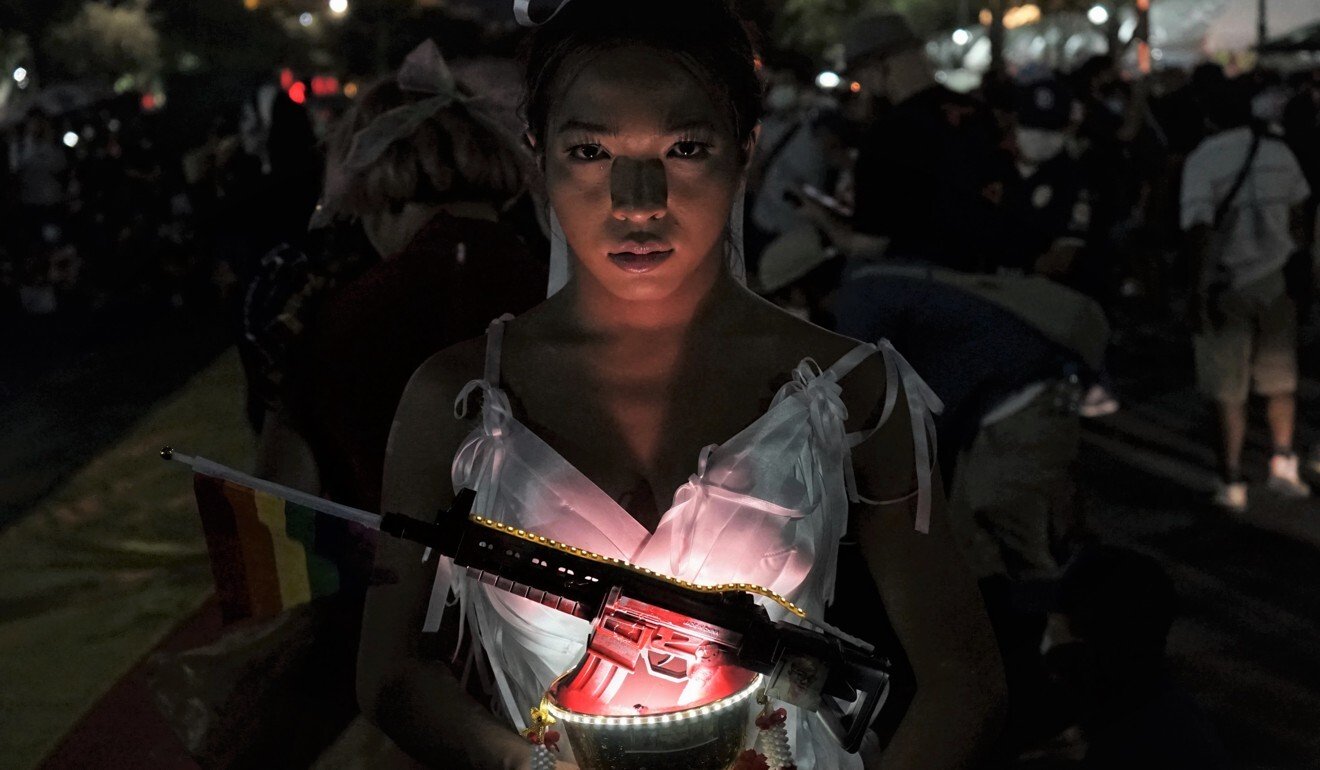 Angele Anang wore a dress with white ribbons – one of the symbols of the democracy movement – on Saturday. Photo: Handout

LGBTQ and women’s rights activists have taken centre stage at pro-democracy rallies which are drawing tens of thousands to Bangkok and smashing taboos of criticising the country’s power structures, especially the royal family

Stirring the crowd with golden microphones, a group of advocates – wearing wigs, glittering dresses and even a Thai Airways cabin crew uniform – received wild applause as they carried a large rainbow flag through the Sanam Luang royal field on Saturday.

In July, the Thai cabinet approved a bill to recognise  same-sex unions. But even if passed, it stops short of extending to same-sex marriages the same rights as heterosexual unions.

“This is the first time that LGBTQ activism has organically emerged within Thailand’s democracy movement” Paisarn Likhitpreechakul, gay rights scholar

Activists say there is a paradox with the image of Thai society: on the surface, it is seen as socially permissive but the country is underpinned by conservative values and rigid laws.

LGBTQ leaders, who are young, connected to global movements and assertive in their identities, say they are no longer willing to wait for others to debate the issues defining their lives

“The rainbow flag brought people together to claim back the ‘people’s field’ from the ‘royal field’,” said Chumaporn Taengkliang, co-founder of the Women for Freedom and Democracy group.

“This did not come from the same old men shouting down the microphone. Feminism is the name of the game now,” she said, praising the take-down of entrenched “patriarchal” powers. 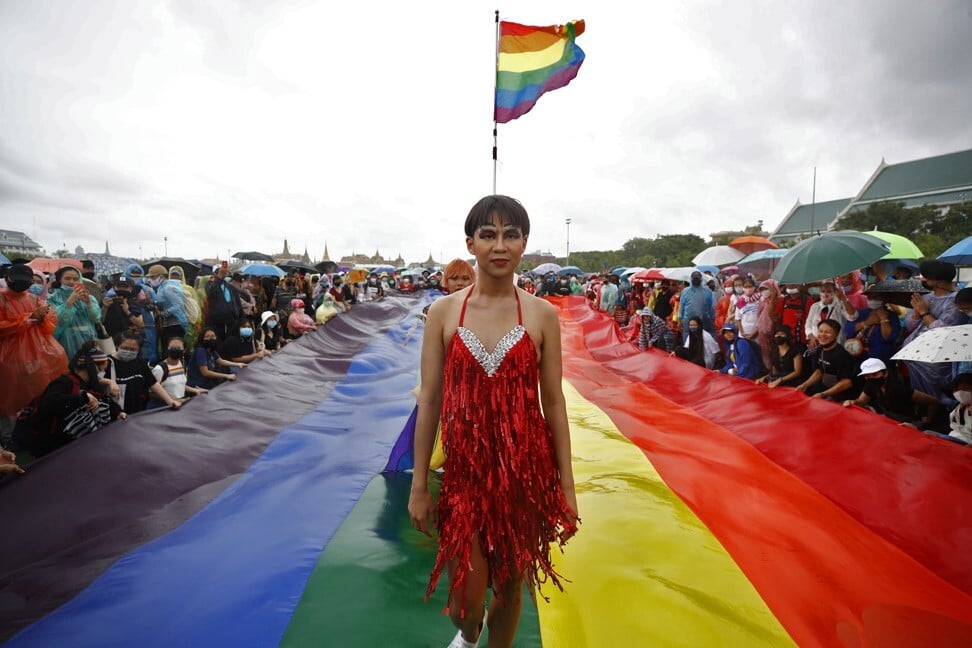 An LGBT protester walks on a rainbow flag laid out as a catwalk at Sanam Luang on September 19, 2020. Photo: EPA-EFE

Thailand’s youth-led protests have snowballed since July to become a threat to a government, which has so far given no clear response to their demands.

In a sign of widening support, the weekend rally also pulled in large numbers of “red shirt” supporters, who are veterans of Thailand’s political rupture between pro-democracy forces and the royalist army-backed establishment.

On Sunday morning, the protesters pushed deeper into the no-go zone of Thai politics, urging reforms of the once-unquestioned monarchy, led by King Maha Vajiralongkorn and protected by a tough criminal defamation law. 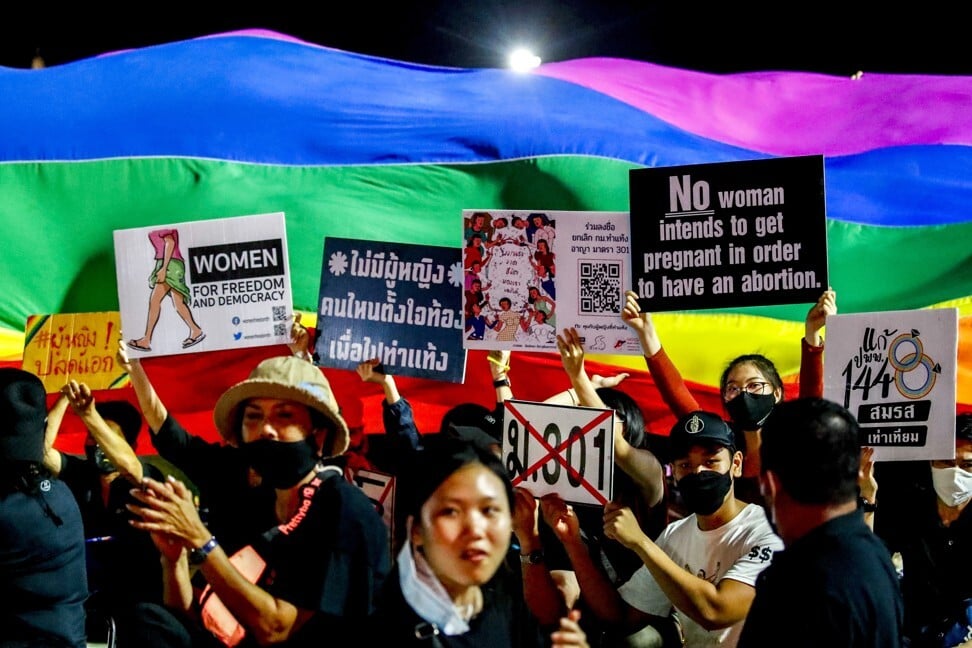 LGBTQ and women’s rights advocates hold up signs next to a rainbow flag on September 19, 2020. Photo: EPA-EFE

‘Society sees us as freaks’

While the protests have been peaceful, experts say Thailand is careering towards a political crisis.

The deeply unpopular government of former army chief Prayuth Chan-ocha is struggling to address the economic slump caused by the coronavirus.

Now it faces an unprecedented challenge from a movement whose values of free expression, political, gender and sexual choice are unrelatable for many of the elderly army loyalists who dominate parliament.

It is a generational change and it is happening in double-time, said Pimchanok “Nai” Nongnual, a 19-year-old high school student in an all-girls’ school who identifies as a trans man.

“Society sees us as some sort of ‘freaks’,” he said.

“I was called a tomboy or lesbian my whole life. My family will never understand me, so they will never support me,” the final-year student said. “But we’re at the forefront right now – finally we have a platform.” 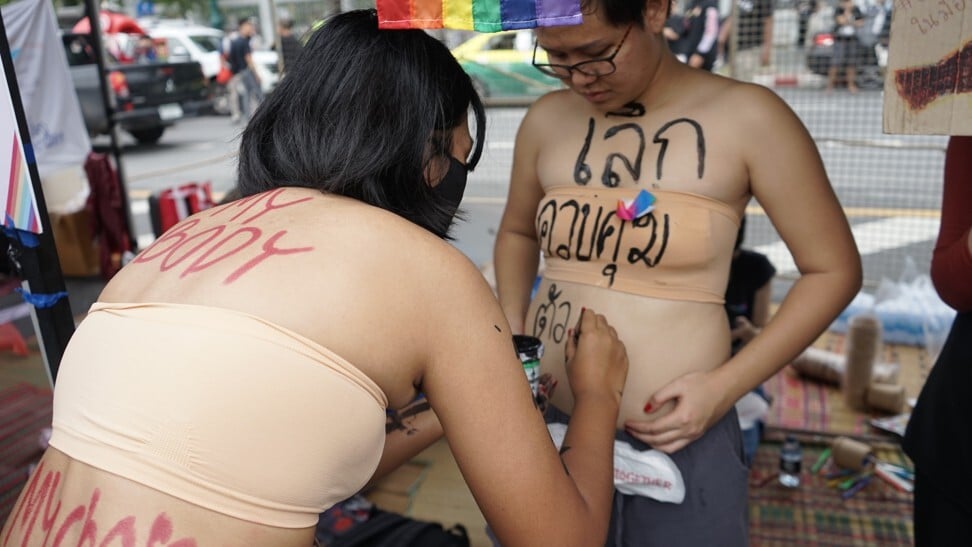 A women’s rights activist paints “Stop controlling my body” on a fellow protester at a rally in Bangkok on September 19, 2020. Photo: Handout

At the “Women for Freedom and Democracy” tent set against the tapering chedis of the Grand Palace, activists painted slogans such as “FEMINIST”, or “my body, my control”, on their bodies to raise their objection to Thailand’s outlawing of abortion, high rates of rape and sexual violence and a male-dominated polity and society.

“I’m a feminist and a lucky one because my family respects my rights over my body,” said Ornalin Pimsamsee, as detailed drawings of the female anatomy, rainbow flags and sanitary towels hung behind her. “But there are so many people who don’t get the same respect that I do.”

It is a breakthrough moment for Thailand’s LGBTQ community – long represented by a strong civil society movement but also lampooned as silly and overly sexualised in TV shows. 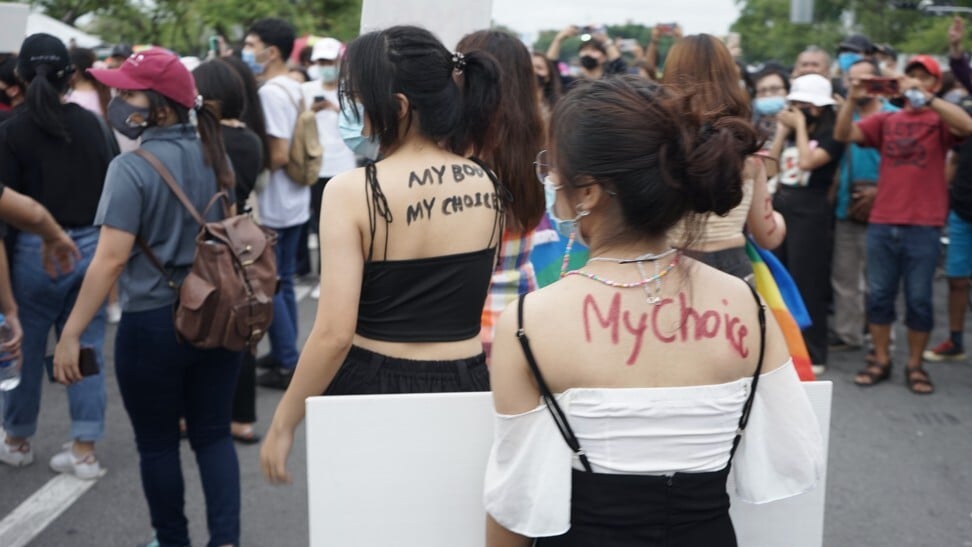 Women painted with slogans including “my body, my choice” at a rally in Bangkok on September 19, 2020. Photo: Handout

“This is the first time that LGBTQ activism has organically emerged within Thailand’s democracy movement,” said Paisarn Likhitpreechakul, a gay-rights scholar and activist at the Foundation for Sexual Orientation and Gender Identity Rights and Justice.

It has mobilised around the marriage question and a deep desire for change after years of military-aligned government, he said.

“The #ItGetsBetter, #MeToo, and other global social justice movements may be an inspiration [for the community], but it’s the oppressive social environment that’s really driving them,” Paisarn said.

Sogicampaign’s highlights and food for thought: