Bosnia’s record on LGBTQI+ rights is poor; same-sex partnerships are not legally recognised in either of its two entities (Federation BIH and Republic of Srpska), while participants in LGBTQ events constantly face abuse and violence.

Listen to this article in Podcast

LGBTQI+ community members continue to be a marginalized and nearly invisible group, with prejudice existing in both private and public domains. Job loss, eviction, and social rejection are just some of the risks that LGBTQI+ people encounter when their sexual orientation or gender identity is revealed.

In 2019, Sarajevo was the last capital in the Balkans where a Pride Parade took place for the first time. Despite numerous threats, warnings about security risks and announcements of possible cancellations, the Sarajevo Pride was held in September 2019. It attracted thousands of people, four times more than expected, and encouraged the local community to continue the fight for equality.

This year, like everywhere around the globe, public gatherings in Bosnia have been banned due to COVID-19. As the ban included the second Sarajevo Pride, it was moved online.

Nevertheless, there was some real-life action when members of the Bosnian LGBTQI+ community symbolically marked the day by driving through the city in cars, promoting the message We exist, we live in this country, we demand laws, protection and security.

This action was the culmination of the “Life is not inside four walls” campaign, which equated lockdown, curfew and fear to the isolation and fear which LGBTQI+ people experience on a daily basis.

Literally rather than figuratively returning inside “four walls” meant a number of new problems and issues for the LGBTIQ+ community. LGBTIQ+ people often leave their families due to misunderstanding and non-acceptance, they get a job and create their own lives. With the arrival of the pandemic unemployment increased, so many LGBTIQ+ people had to return to their parents’ homes. Psychological harassment, emotional and economic blackmail, misunderstanding, and even physical violence, added to the pain of not being able to see friends and loved ones. Unfortunately, we face a serious problem where many LGBTIQ+ people are still not understood or supported by their families. This is why we must work with the parents of LGBTIQ+ people.

When the pandemic started we realised that it would not vanish quickly so we began to develop various alternative, parallel, scenarios. What was clear to us from the outset was the fact that we can neither simply wait for “better times” nor limit ourselves to online programs. It’s important to take to the streets and to say “We are here and and we are not going anywhere. These streets belong to us, even if way too often we cannot walk them safely.” The essence of the Pride March is the occupation of public space and we have accordingly created new ways to achieve this while the current situation lasts.

It was symbolically important for us to drive the cars to the planned end point of the march, so this is what we did it and we filmed it.

The idea behind BIH Pride Parade has always been to represent the whole country, not just the capital city so we made a video called the Pride Festival based on the arrival of the Olympic relay in the city. We wanted this video to say that BIH pride belongs to everyone in BIH and on that occasion flags were flown in Jajce, Zavidovići, Banja Luka, Tuzla, Sarajevo and many other places.

The informal group qSport Sarajevo marched through Sarajevo with mothers of LGBTQI+ people holding flags. This was an act of real courage so our congratulations to them!

We also invested a very important symbol of the city, the iconic Cablecar. 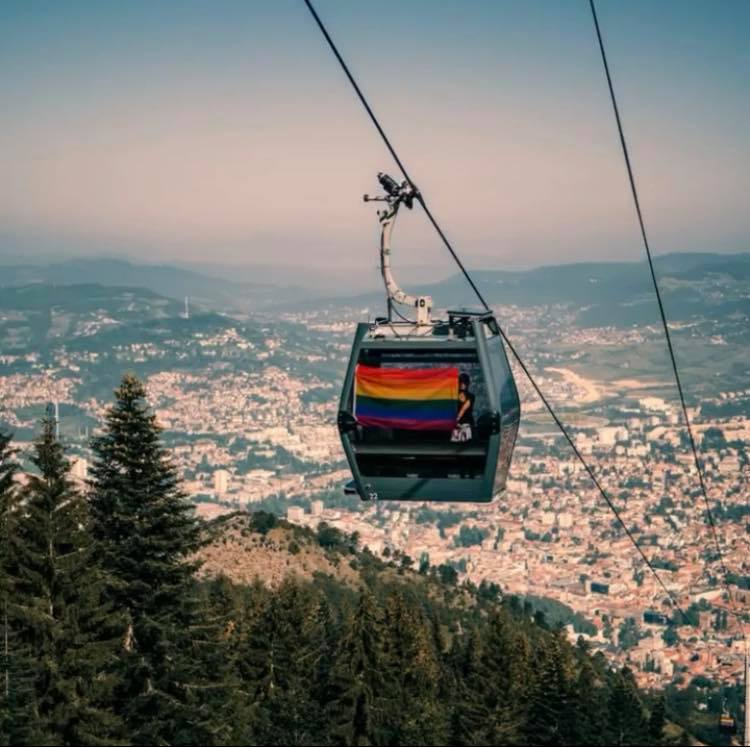 Overall, the reactions were quite positive. Firstly, the LGBTIQ community was thrilled that in such difficult times we had found a way to raise visibility and promote our messages. Even though the media generally shows little interest, we did attract some media attention.

Of course, it’s important to mention that we live in a rather homophobic society where there is still a lot of resentment about our existence with a lot of hate speech and calls for violence; but we are determined not to give up the fight, and we will be more and more visible. With that in mind, we are planning more exciting events, so stay tuned. 😊