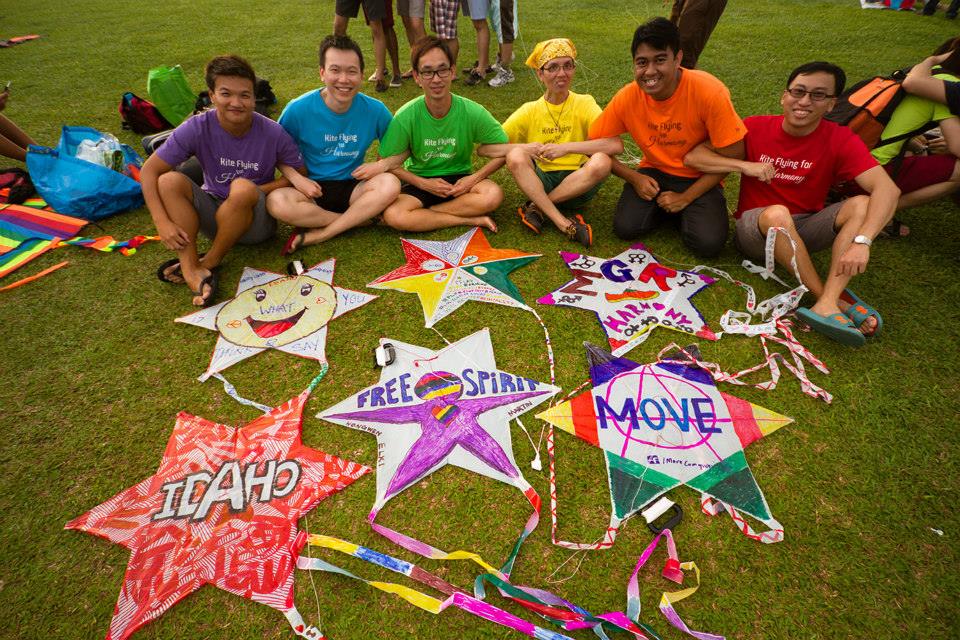 Go fly a kite in Singapore

Ever thought about organising a kite flying day? This is another health and well-being action, with community building – as well as visibility – at its heart, which could make a great IDAHOT action in your town or city.

This sort of action could be done in both open contexts, as well as possibly in places more hostile to LGBTQI rights organising. It makes an interesting alternative to either a public march or demonstration, or to a rainbowflash balloon release. It’s also more environmentally friendly than releasing balloons.

The idea comes from an action for IDAHOT 2014 in Singapore, organised by Move Community (a local activity hub for LGBT individuals, and their families, extended families and friends). We asked one of the organisers to tell us more about how they did this action, where the idea came from, and what the impact was – and they told us this great story! ut from an event my niece participated in Malaysia. I was contemplating to create something similar to promote friendships, harmony, healthy living among LGBT and other communities for IDAHO day. Since many of our active members love kite flying more than running and we thought it is more interactive, so we changed it to kite flying.

As we were doing it in a popular public place for kite flying managed by Singapore government, there was a fear of being stopped by the authorities. I am happy that it didn’t stop there. I consulted Singapore Kite Association (SKA) for their advice. I called and went down to speak to the venue receptionist to find out some facts.

It took about a month’s time planning, meeting, and following-up with SKA, volunteers, printer and participants. We managed to engage SKA to teach us how to make kite on the event day. We formed 6 teams and printed different colored T-shirts (based on the 6 rainbow colors) for the event. We spent SGD480 (SGD16 x 30) for printing of the 30 t-shirts (about 280 Euros). About 27 people attended the event. We collaborated with another social group and invited them to join this event.

As we didn’t do any post event survey or feedback, we cant really measure the impact of this event to our communities at large. We were OUT, having fun flying kite in the public together with public – straight, family, local, foreigners. It was a great achievement to me personally as I overcame some of my fears, coming OUT to SKA, gained understanding, engaged and made friends. I also hope our members and friends feel more comfortable to be seen OUT in public (with an open gay group) after the event, which many people still do not wish to. Be brave. Be OUT . Be yourself! Live OUT proud with Rainbow! no matter how small you are 😀

I have not really thought about it yet. There is a possibility of inviting different LGBT and non-LGBT groups to form teams.

You can view some more event photos here on facebook.

And you can find out more about Move Community here.

Update: Kite Flying is an activity popular across Asia, including Mumbai !

Gay Bombay’s kite flying event, now in its 14th year, is organised at the Juhu Silver Beach on the Sunday, closest to Sankranti. Kite flying is a tradition at Sankranti, but this event has a twist in that the kites flown are rainbow coloured, specially ordered from Dongri. It is a pretty sight to see dozens of rainbow kites floating in the sky among all other kites.

GB kite flying also has an awareness creation/ sensitisation component in that many of the public on the beach curious about the rainbow kites are told about it being an LGBT event during Pride month. Post the event, at dusk, refreshments, typically, Puri, Undhyo and jalebis are distributed from a tent specially created and those are the best we have experienced so far in Mumbai. The event typically attracts 150-200 people from the community and allies .