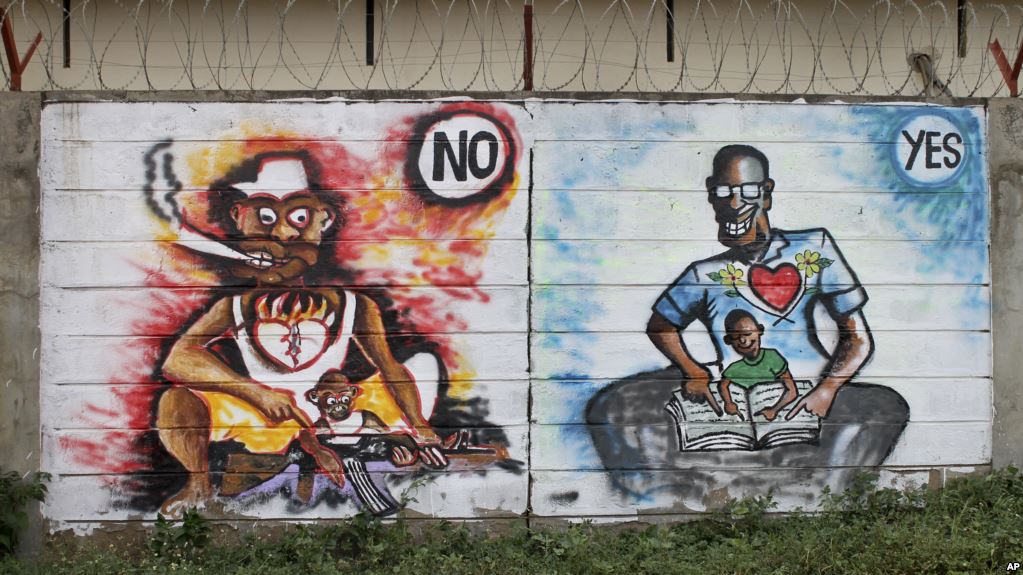 The Art of Art Protest

Protest Art – From Picasso to Pussy Riot and Banksy, These are the Greatest Examples

What is the scope and impact of protest art? As Adorno famously wrote, ‘all art is an uncommitted crime’, meaning that art challenges the status quo by its very nature. Thus it can be argued that all art is political in the sense that it takes place in a public space and engages with an already existing ideology and dominant discourse. Yet, art can often become dangerously and explicitly political and serve as a powerful weapon. Throughout the history of social movements and social revolt, art has always reacted against oppression, violence, injustice and inequalities. Addressing socio-political issues and challenging the traditional boundaries and hierarchies imposed by those in power, art can open up the space for the marginalized to be seen and heard and contribute to the social change by producing knowledge and solidarity or simply raising awareness. In this way, the personal life and work of the artist transcends the individual and speak meaningfully to a larger audience bringing together the political and human functions of art.

Since many variations of protest art can be found throughout the history, it is difficult to establish the beginning of this politically engaging artistic expression. Activist conceptual and performance art was majorly influenced by Dada, an anti-war movement which used satire, non-rational and anti-idealistic discourse to critique the First World War and its capitalist agenda. Some of the other early examples of protest art include the Mexican muralist David Alfaro Siqueiros who has been very active in left-wing politics in the beginning of the 20th century and wanted to reach hard-working Mexicans through art. When it comes to fine art, Picasso’s Guernica (1937) based on the Spanish Civil War and capturing its atrocities and inhumanity, served as an inspiration for the modern human rights movement.

War was often a motivating factor for artists, also providing the metaphor for the more general exercise of power. Many artists during the 1960s and 1970s visibly opposed the Vietnam War including Ronald Haeberle, Peter Saul, Carl Andre, Norman Carlberg and Nancy Spero and produced artworks that raised awareness and called for the responsibility. Chris Burden’s performances with intentional wound inflicting called upon the audience to engage with political messages and consider their responsibilities. Art became a potent language to speak against various forms of oppression and persisting inequalities regarding gender, race or class. As one of the founding members of the Feminist Art Movement,  Judy Chicago explored the women’s position in culture and history through large collaborative installations. Art has also shaped the cultural and political response to the AIDS pandemics during the 1980s, with artists like Keith Haring, Niki de Saint Phalle or Robert Mapplethorpe raising their voice.

As Nina Simone said, ‘how can you be an artist and not reflect the times’? We bring you some of the most influential protest art of our times. 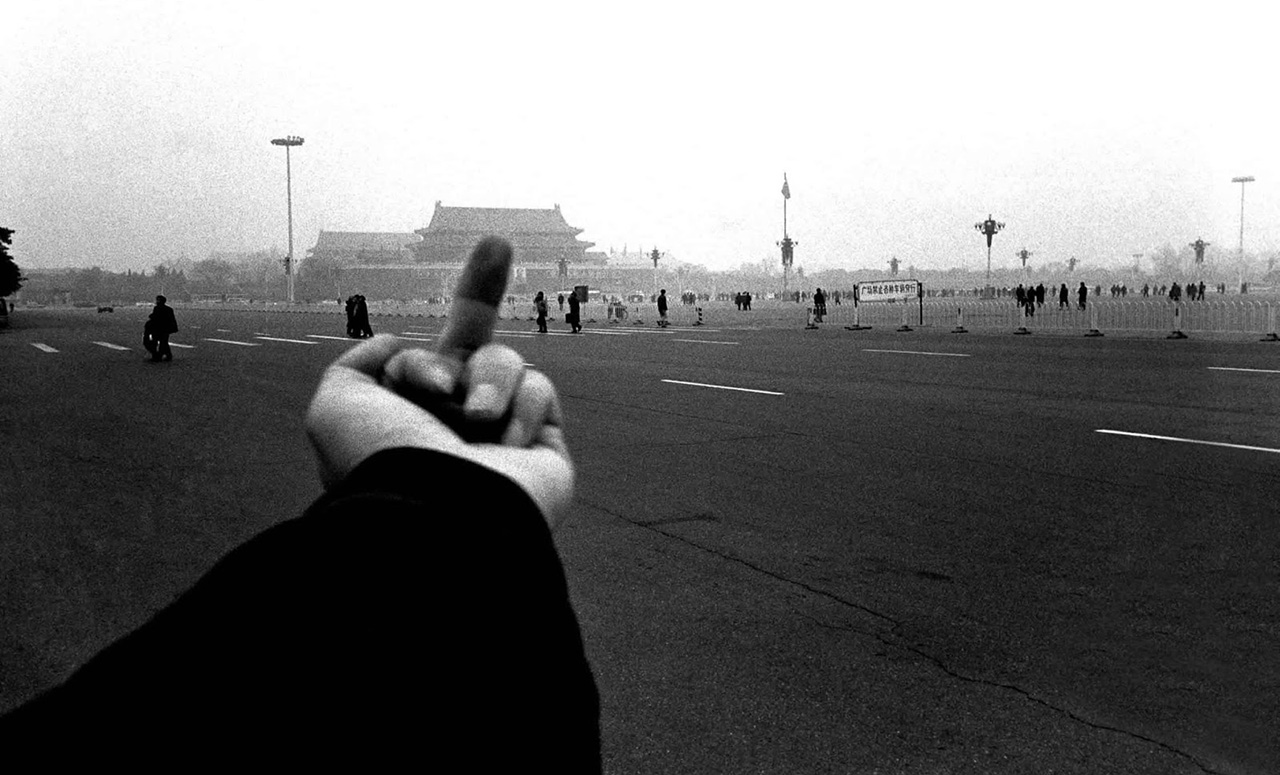 One of the most famous figures associated with political activism in contemporary art is certainly Ai Weiwei. Using his art to address the corruption of Chinese government and their neglect of human rights, but also other politically touchy issues, Ai Weiwei has become a synonym for disobedience. Some of his most memorable pieces are the Study of Perspective series where he took photographs of his middle finger sticking it up various monuments around the world including Tienanmen, the installation Remembering where he campaigned to bring justice to the victims of the 2008 earthquake in Sichuan, the installation Sunflower Seeds consisted of 100 million porcelain seeds made by 1600 artisans commenting on the mass production and consumption, and lately a controversial piece addressing the plight of Syrian immigrants. He has often paid the price for his art, his tongue in cheek criticism and outspoken attitude, but continues to speak and act for many. 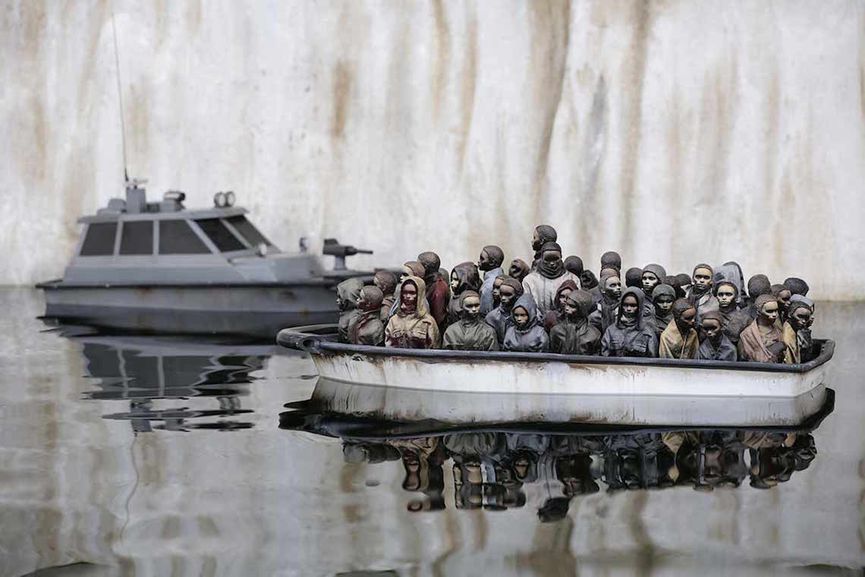 A legendary and globally famous guerilla street artist, Banksy has been throwing his politically pointed, satirical, clever and often funny pieces all around the world. Using art as a deadly political weapon, his works always interact with global politics and global issues. He once characterized graffiti as a form of underclass ‘revenge’ that allows an individual to take over the power, territory and glory from the privileged. He has dealt with various political and social themessuch as anti-war, anti-consumerism, anti-fascism, anti-imperialism, anti-authoritarianism or anarchism. Banksy has recently created a series of works across Palestinian ruins in the Gaza strip, as well as in Syria. He has also done a series of murals in Calais refugee campmaking a clear statement regarding the refugee crisis and the treatment of refugees. Another recent politically charged project was a subversive and dark theme park Dismaland packed with irony, satire and honesty, that was later dismantled and sent to Calais to be used as a shelter for refugees. 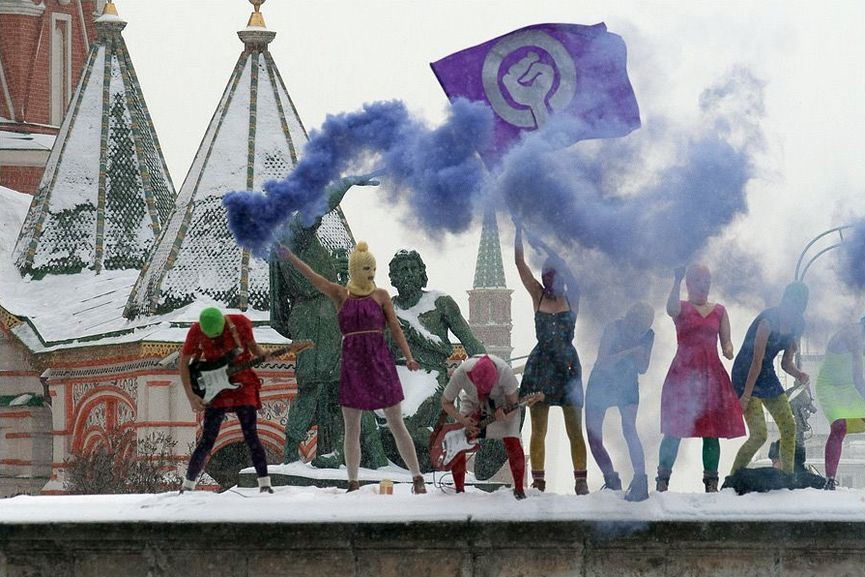 A Russian feminist punk rock group that has staged numerous unauthorized provocative guerrilla performances in various public locations, Pussy Riot has shook the world in 2012 with their protest performance in Moscow’s Cathedral of Christ the Savior directed at Orthodox Church’s support for Vladimir Putin. They have dealt with various politically charged themes such as feminism, LGBT rights, democracy, freedom of speech and opposition to Vladimir Putin. The Pussy Riot trial after their ‘punk prayer’ and a jail sentence for their members presented an even more obscene performance of state power and became a symbol of the battle against Putin’s oppressive regime. Their political action through performance art is an example of how the power of the state and authoritarian policies can often produce some of the most provocative art practices. 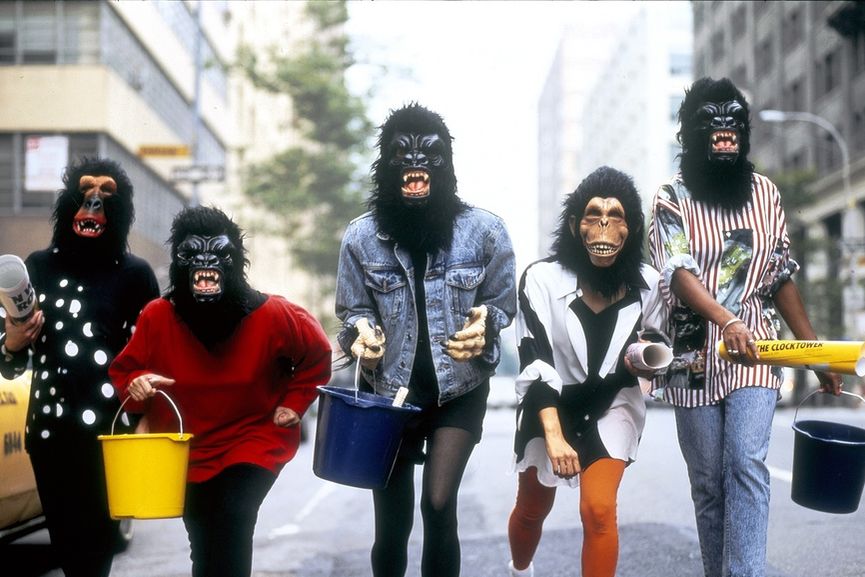 Wearing gorilla masks and miniskirts and sporting pseudonyms of deceased lady artists like Frida Kahlo, Kathe Kollwitz, and Alma Thomas, the feminist art collective Guerrilla Girls started shaking the art world over 30 years ago. Formed in New York in 1985 with the mission to bring into focus gender and racial inequalities in the fine arts, their legacy is marked by various forms of protest artworks and flagrant acts of misogyny shaming. Through stickers, posters, billboards, dialogues, debates and ‘weenie counts’, they have pointed out the hypocrisy of the art world traditions and institutions and their prevalent sexism and racism. Expressing their ideals and opinions regarding the variety of social topics, their works, mainly posters, are a combination of humorous images, outrageous visuals and statistics. The art collective is still very active, and they have expanded their practice to criticize politicians as well, especially conservative Republicans. 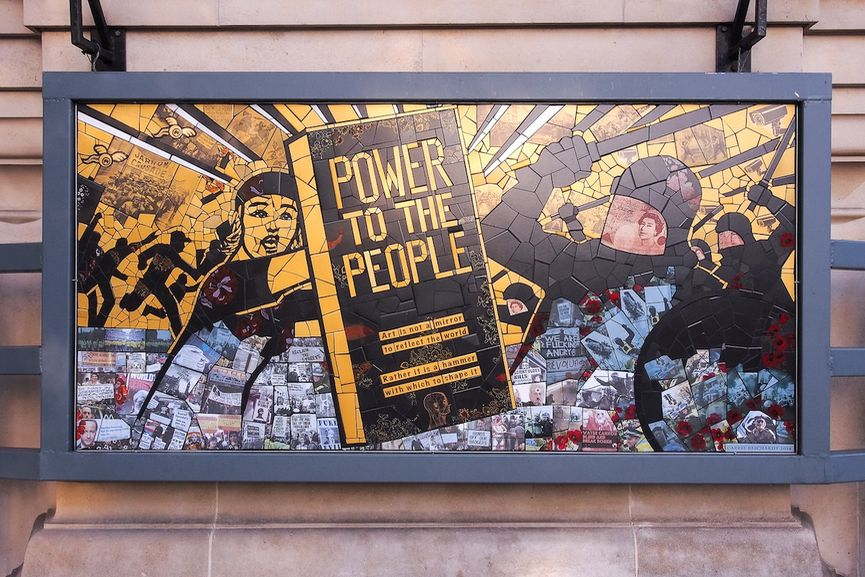 Carrie Reichardt – A Figure of the Crafticism Movement

Famous for her continuing work in activism, an artist Carrie Reichardttakes interest in the social, economic and political issues that range from unjust imprisonment and death penalty to new colonial wars. A figurehead of the Craftivism movement that joins craft and activism, she feels that voicing opinions through creativity makes your voice stronger. An essentially anti-industrial art movement that first appeared in the 1960s, it combined crafts as a field perceived as ‘women’s hobbies’ with Western feminist theory and practice. Being involved in community and public art projects for over 15 years, she uses murals, mosaic and screen-printing to create intricate, highly politicized works of art. After communicating extensively with political prisoners, she has fought for convicts on death rowthroughout her life influencing her art greatly. Some of her latest pieces include The Milan Elephant Parade inspired by the revolutionary spirit spreading across the world and conveying messages about the end of capitalism as the only answer, and Mary Bamber, a life-sized ceramic-adorned figure of this famed revolutionary socialist. 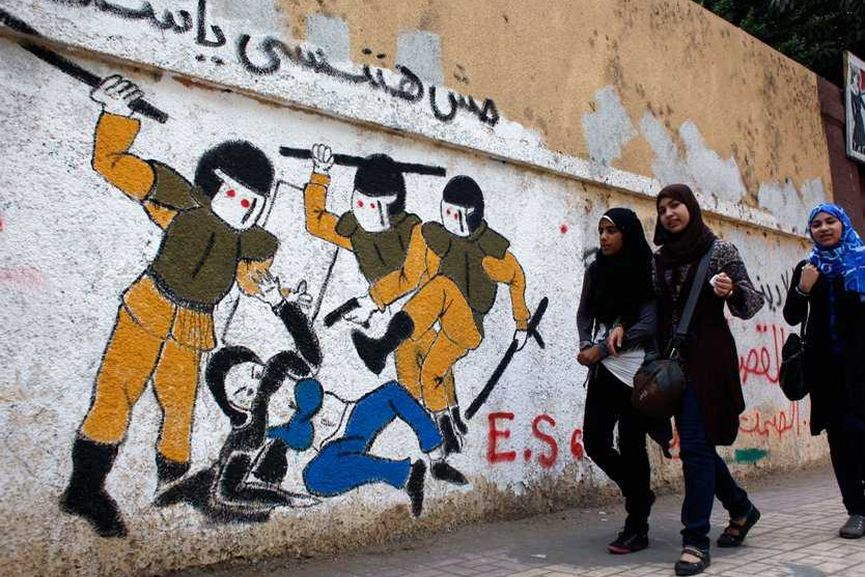 Despite not being a coherent art movement, some of the most immediate, insightful and human art seen for some time has been produced during the Arab Spring in 2011 when protesters armed with spray cans articulated their interpretations of the uprising on the walls around them. Not that present and common in the Arab world before the uprising, graffiti became a tool for providing social and political meaning. Filled with vibrant political and social commentary, the streets became canvases for artists to show their revolt, to remember people who have been lost and communicate directly to the oppressors. Ranging from writings to drawings and varying in techniques used, graffiti were the only public means for sending a message. Realizing the power and danger behind these artistic expressions confronting censorship and oppression, the government soon started whitewashing them only to trigger more artists to come back. The Arab Spring has launched careers of many artists such as el Seed, Zoo-Project, Ganzeer, El Teneen, Aya Tarek, Alaa Awad or Ammar Abo Bakr, and has been a subject of numerous curated exhibitions.

Featured image: A graffiti in Egypt, via businessinsider.com 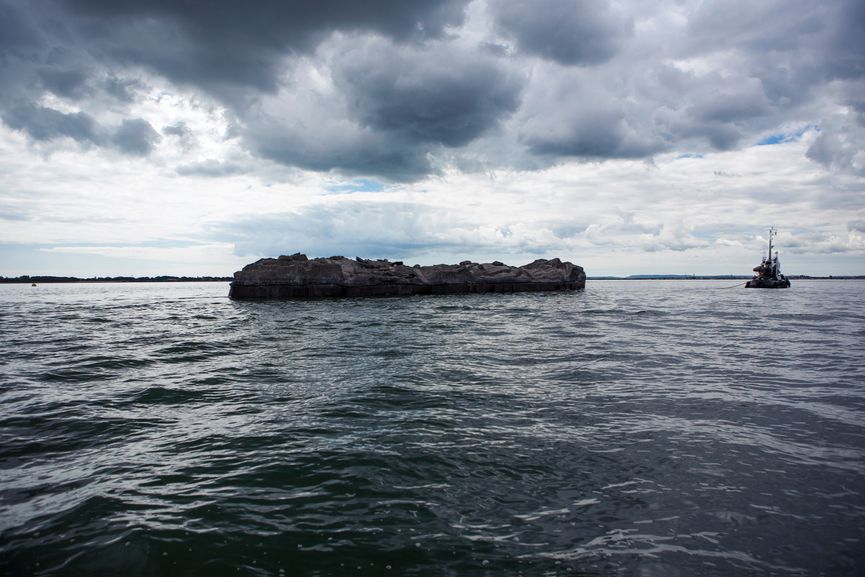 Nowhereislad is an art project by an artist Alex Hartley that involved the discovery of an island originating from the Arctic. The island was taken into International Water and declared a new nation. Towed around the South West England during the 2012 Olympic Games, it ended its journey broken up into pieces and divided among 23,003people from 135 countries who became its citizens. A small rock was even sent to the edge of space. The narrative of the artwork was simple – it portrayed the journey of an island as a migrant nationduring the Olympics. The artwork as a symbol of a displaced nation in search of its people was a provocative and ambitious project challenging our assumptions about the fixity of landscape. This piece of alien land squatting in British waters presented a promise of utopia with profound social, political and economic implications within the context of London 2012.