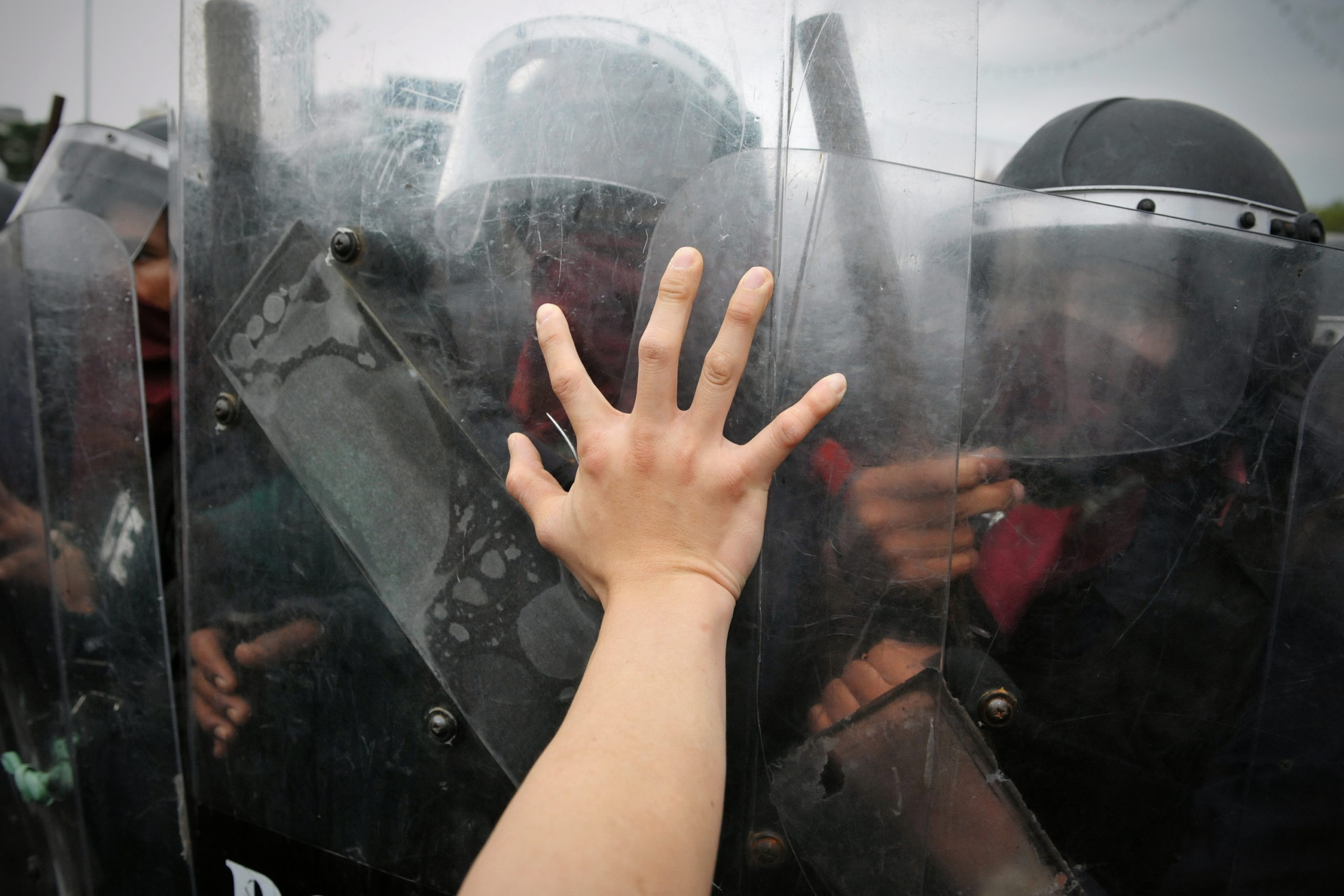 FACING UP TO THE AGENT PROVOCATEUR PROBLEM

This article by Steve Chase was first published on the International Center on Non-Violent Conflict.

It contains some additions by sogicampaigns

The term agent provocateur is French and literally translates in English to “inciting agent.”

While the term may be best known today as a luxury lingerie brand, in movement circles it refers to paid government agents who infiltrate social movements and pretend to be activists. These paid agents work at being disruptive influences within movements and discredit movements in the public eye by taking, or encouraging others to take, detrimental actions such as violence. Their ultimate objectives are to decrease mass participation in the movement, decrease sympathy for the movement, and to create plausible excuses to repress the movement with increasing violence.

This practice has a long history in many countries around the world, including the United States. It has been well-documented that the FBI and many local police departments, and some corporate security offices, have used such covert anti-movement tactics for decades. Why do advocates of a “diversity of tactics” not squarely face this reality? The likely reason is that agents provocateurs typically advocate for the same kinds of “low-level violent” tactics that they do.

There is simply no documented case that I know of where a paid undercover government or corporate agent has encouraged activists to engage in strategic civil resistance tactics and maintain their nonviolent discipline doing it. They do not see such movement actions as being in their interest. The actual tactics encouraged by paid agents provocateurs are dividing movements by denouncing nonviolent activists as not being sufficiently radical, and sometimes accosting and assaulting them. During public mobilizations, agents provocateurs yell at counter-demonstrators, punch them, break windows, burn cars, riot, and street fight with police.

How it all started…

In the times of the nonviolent independence struggle in India, followers of Gandhi were trained not to react violently when assaulted, but to respond to the opponents as best as possible, with love and compassion.
This approach not only made it more difficult for the British to use violence, but it dramatised the injustice they were struggling against and helped in the mobilisation of the support for given cause, both within India and abroad.

Ambush and/or Firefight – The crime of Cerro Maravilla

A seminal example of Agent Provocateur tactic occurred in Puerto Rico at the end of 70s.

An agent provocateur, Alejandro González Malavé, working undercover for the Puerto Rican police, enticed two young supporters of independence for Puerto Rico into a reckless act that cost them lives. One was Carlos Enrique Soto Areví, the son of one of Puerto Rico’s most important literary figures, the novelist Pedro Juan Soto. The second was a worker, Arnaldo Dario Rosado. Both were outraged at the colonialist treatment that Puerto Rico received at the hands of the United States . They wanted to demonstrate this in some dramatic way.

Their lack of practical political experience made them easy prey for González Malavé. The “agent” persuaded them that a noble act for their homeland would be to destroy some communications towers on the top of a hill called “Cerro Maravilla.” This was meant to express solidarity with imprisoned Puerto Rican independence fighters.

The three kidnapped a taxi driver and forced him to drive them up to Cerro Maravilla. But when they arrived, they found they had been led into a police ambush. As the armed police approached, González Malavé identified himself as an agent, and Soto and Rosado were killed.

The “official” story was that they had been shot in a firefight with the cops.

The power-holders that hire agents provocateurs know that undermining a movement’s nonviolent discipline, and encouraging the kinds of tactics also advocated by some well-meaning but strategically challenged activists, makes movements easier to defeat. Low-level movement violence is in the power-holders’ interest. If it wasn’t, how likely would it be that oppressive regimes all over the world would routinely spend significant time, human resources, and money trying to get activists in growing movements to engage in violent activities?

The power-holders’ understanding of movement dynamics makes sense. In her comparative case study research reported in her 2011 book Nonviolent Revolutions, Sharon Erickson Nepstad discovered that the three failed national civil resistance movements she studied had a significantly lower level of nonviolent discipline and, as a result, far fewer defections among the police, military, and security services than the three successful cases she examined. None of this surprises government agents provocateurs. Yet, advocates of movement violence seem oblivious.

During “Occupy” protests, some of charismatic strangers wormed their way into protest leadership, and eventually entrapped inexperienced young radicals to get involved in plans, which sometimes included violent acts.
The sole purpose of the provocateurs was to discredit the movement, which started to gain momentum, in the eyes of the public. 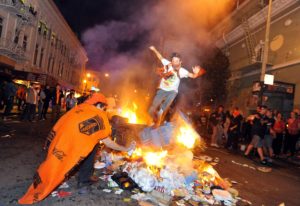 In the beginning of July 2020, thousands of citizens gathered in front of the Parliament building in Belgrade, following the announcement of President Aleksandar Vučić that a new weekend-long curfew would be imposed due to rise in COVID-19 cases.
After 8 weeks of curfews and weekend-long complete lockdowns imposed in Serbia during March and April, this was the final straw.
The protests represented the most serious unrest in Serbia since the ruling Serbian Progressive Party (SNS) came to power in 2012.
As part of these protests, masked individuals, thought by many to be Agent Provocateur hooligans spurred by the authorities, instigated clashes with the police.
To thwart the Agent Provocateur tactic, protesters devised over social media the counter strategy to immediately sit down when violent clashes would occur, to that the Agents Provocateurs would become easily identifiable and police forces could arrest them without clashing with non-violent protesters.

It has always been a painful irony that the small but sincere group of Black Bloc anarchists who regularly engage in these types of “low-level violent” behaviors during mass nonviolent actions are unwittingly doing the dirty work of repressive regimes by voluntarily acting like agents provocateurs. Such unrealistic, but well-intended activists even create a fertile environment for actual paid agents provocateurs to operate within our movements. This doesn’t help us win. It makes success that much harder.

Because of this painful irony, there is an excitement about the growing efforts by various researchers and movement strategists to discover creative and responsible ways to shift the dynamic and increase the degree of nonviolent discipline in our civil resistance movements and thereby increase our effectiveness and chances of success.

Note: This very interesting article details how the Agent Provocateur strategy has been used online in order to incite