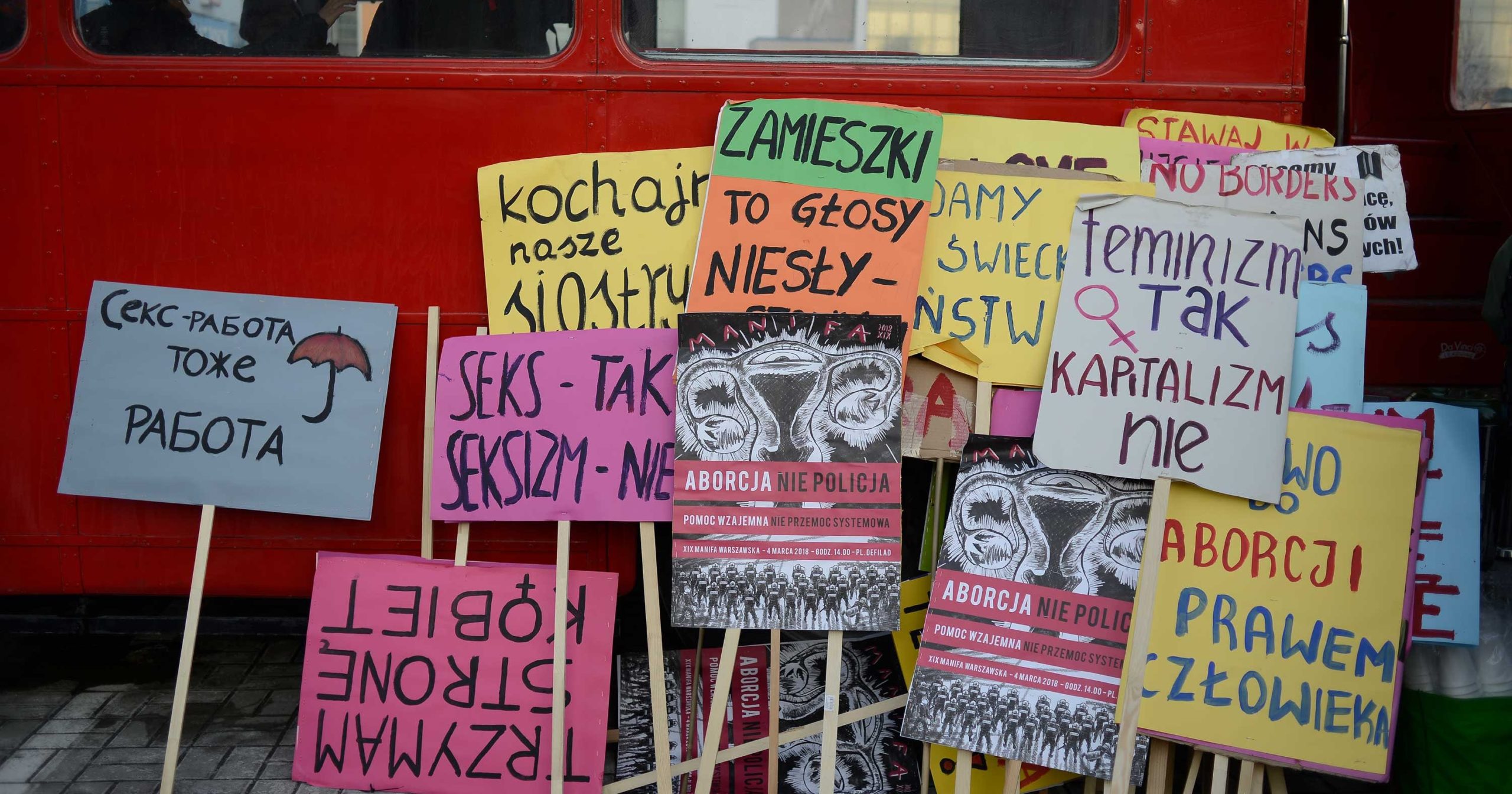 This article by Agata Skrzypczyk first appeared in the MobLab blog

During a pandemic, successful protests are not only effective – they also pay attention to the safety and well-being of their supporters. 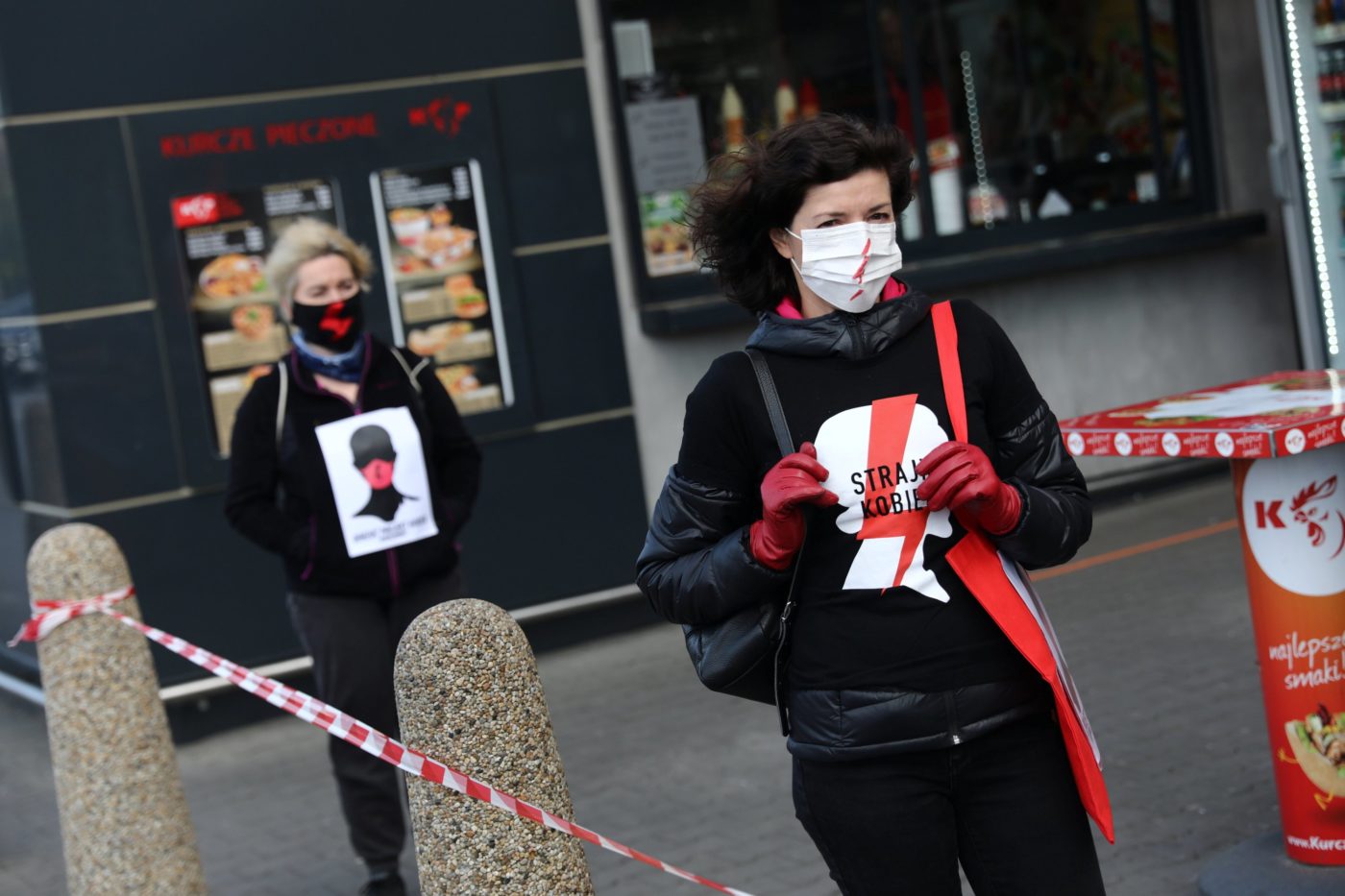 “We are worried that the government will use the current situation and focus on the virus against fundamental reproductive rights for women,” said Barbara Nowacka, a member of Polish parliament, known for being active in human rights.

Amid a pandemic, a citizen initiative proposing to outlaw an abortion in the case of foetal abnormalities was put to a vote on 15th of April 2020 in a parliamentary session in Poland.

Poland already has one of the strictest regulations in Europe regarding reproductive rights. Abortion is banned in most circumstances, except when a woman’s life is in danger, there is a risk of irreversible damage to the foetus, or the pregnancy is as a result of rape or incest. These exceptions are thoroughly regulated by the State, including miscarriages, which are often suspected of being induced.

It is difficult to obtain a legal abortion in Poland, as most abortions in the country are illegal, and many Polish women leave the country to get abortions. According to Polish Ministry of Health, depending on the year, there are about 1,000 or 2,000 legal terminations , while illegal procedures are estimated to be anywhere between 10,000 and 150,000.

Previous attempts to tighten the abortion law further took place in 2016 and resulted in mass protests in the country known as Black Monday. Thousands of women took a day off work and  school, occupying the streets dressed in black. Some even supported by their employers, women managed to stop a new regulation, until the topic came back to the parliament’s agenda on the 15th of April this year.

Black Monday, also known as National Women’s Strike, was organised by the newly created independent grassroots organisation called Women’s Strike (Strajk Kobiet in Polish). According to their website, they are an “informal, impartial initiative of women, both non-associated and belonging to various women’s organisations.” Back then in 2016, this same core group coordinated a simultaneous strike in 147 Polish cities and mobilised around 100 thousand people.

This time, and especially during a pandemic, Women Strike knew that they had to organise protests that were just as innovative and creative as Black Monday, using all possible tools and tactics to unite people around their urgent cause.

“We are aware that online or remote protests will not have the same effect as massive strikes on the street,” said Liliana Religa, Communications and Promotions Coordinator in the Federation for Women and Family Planning in Poland. “ However, we wanted to give women a chance to feel united. To feel that they are not alone locked in their houses and their voices can be heard as loud. That was a very important goal itself.”

The first stage started on 9th of April, a week before the planned parliamentary session and included writing mass emails and Tweeter messages to members of the parliament. The organisation Akcja Demokracja provided a special form on their website to make the process easier. Messages were calling parliamentarians to take a stance against the strict abortion regulation and to reject the draft. “Take a stance! Tell MPs what you expect from them. In times of coronavirus, we need to work intensively online and exert pressure.”  A Facebook event provided participants with examples of such emails and messages they can send. One of the suggested Twitter messages stated “Fight the virus, not women”.

According to organisers, almost 3 million messages were sent through the official inbox that was provided, not including privately sent emails. The messages have shown both parliamentarians and media that democracy and women rights supporting organisations will protest against the proposed legislation.

Women’s Strike put together online events, social media advocacy, and handbooks for participants – providing them with various options of participation. There were a few protest plans that were designed to keep the social distancing rules: a grocery strike – encouraging people to line in shops queues with posters and banners, a creative strike – involving painting thunderbolts in visible places in a city, and a bicycle strike – taking a protest banner on a bike ride through the city.

The main event, organised one day before the planned parliamentary session, called for protesters to take an action outdoors, using a loophole in regulations that allows people to queue at grocery stores and commute using cars and bikes.

Graphic designer Ola Jasionowska designed the symbol of the event, a logo of a woman wearing a protective masks with a thunderbolt. Her logic for the image being a mask was to show that protestors still cared about safety, but that they would continue to fight, while the thunderbolt symbolised a warning and mobilisation. This image quickly became viral on social media, and was also shared by influencers supporting women’s rights. The logo helped create a sense of responsibility and urgency by saying that freedom and human rights need to be protected even during a state of emergency.

Another slogan also symbolised this combination of freedom, human rights and safety. “We are wearing masks but we are not going to shut our mouths” was one of the slogans used in a car protest in the city centre of Warsaw. As I heard from participants in the movement in Warsaw, at first, it seemed that the car protest would be small. “Just eight cars covered with banners drove the first round. Then after 10 minutes we saw more and more cars and bikes joining the car procession from each side and eventually stopping traffic,” said Maria, a young woman that was protesting on her bike, describing what she saw. “Every car’s window had a symbol of black umbrellas (the symbol of Black Monday – author’s note) or a picture of a woman wearing a thunderbolt mask. I had such a mask on as well.”

At the same time, demonstrators were queuing up at stores near the entrance to the parliament two days in raw. A facebook event organised to encourage people to line up in this place was explicitly called a queue for freedom.  Every protester wore a mask and made sure to stand at least a few meters apart. They held up  hand-printed posters with the logo of Women Strike and, if asked by the police, said that they were grocery shopping.

“The greatest strength of this action was the enormous commitment of people who contributed with their ideas for protesting,” said Liliana Religa.“People were not afraid of going out to the streets and blocking cities despite the threat of getting fined. The diversity of ideas resulted in offline and online activities, especially on Twitter, Instagram and other social media channels. We achieved a huge mobilisation taking into account a very short time for organisation, easter holidays time and the general weariness of Poles in the progressive dismantling of our democracy.”

“The car protest was a big success for us,” says Agnieszka Czerederecka from Women’s Strike.“We managed to block a Warsaw city centre for about an hour and 90% of cars in the traffic had thunderbolt or umbrellas posters. We cannot estimate  exactly how many vehicles were involved in the strike but certainly a lot. At the same time, we calculated around 500 people in total taking part in the 2 days grocery queuing strikes. It was in the very middle of the pandemic, when almost everything was prohibited. This number may seem small but we still perceive it as a success that these people wanted to take a risk and strike,” she continued.

Participants were provided with all the necessary tools, knowledge and assistance to join the strike.

Facebook events included contacts to people responsible for protests in each city. Handbooks were equipped with all necessary files including high quality printable posters, logos, social media communication tools and messages. Platforms such as WeTransfer and Google Drive were used to share high quality files.

Perhaps most importantly, eager protestants were provided with legal assistance in case of any troubles for allegedly breaking lockdown and distancing regulations. All Facebook events stated the readiness to help in case of legal issues and the prosecuted participants told me that they were assured of the help. “After Black Monday in 2016 we created a Citizens’ Support Committee called Umbrellas,” described Agnieszka Czerederecka. “For the last few years we’ve been cooperating with lawyers that represent accused protestants in courts for free. It works!”

Some protesters received fines or subpoenas for blocking the street with cars and standing outside for too long. All of them were offered assistance from the organisers. A special crowdfunding campaign was launched to collect money for legal and social support for persecuted people. Almost 30 thousand zloty has been gathered (around 7 thousand USD).

“I cannot sit and do nothing while our rights are debated,” says Kama, one of the protestors who faced charges.  “I had an abortion myself because of a fatal malformation and threat to my life. I want my daughter to have the right to make a decision [about her body and life] safely in the future. She adds. “I am a little bit worried that I will not be able to afford the fine from a court but I am waiting patiently for the help of the Women’s Strike that I was assured to get. A lot of my friends and co protesters offered that they will chip in to cover the fine if I need it. I don’t theorise about the future, the problem is now.”

“These [emotions driving these recent protests] are the same kind of emotions that made a Black Monday four years ago a success,” said  Liliana  “This time, various forms of protests gave women a chance to express their anger and fear despite the lockdown. Supporting the mental health of women was an important goal of the protest itself.”

The regulations draft was voted and MPs have not yet rejected the controversial project. At the Law and Justice party’s request, the draft will go to further consideration of the Health Committee and Social Policy and Family Committee. ”I believe that once the project will come back to the parliament voting, there will be no pandemic threat anymore and we will be able to go out into the streets because this need in society is enormous,” said Religa. “We just learned a big lesson about our own strength, solidarity and empowerment.”

The experiment of social distancing protests was a huge lesson for Polish feminist organisers. They learned that protests can be done even with no budget and no technical possibility to hold protests on the streets. Creativity and persistence continue to be the main characteristics of organised Polish women fighting for their rights. Even though it seems that striking on the streets is regarded as the most effective strategy to express  discontent, Polish women cultivated a strong feeling of solidarity by successfully developing creative ways to protest even during lockdown. As Black Monday in 2016 sparked other women’s strikes around the world, we can expect that the recent lockdown protests will inspire people not only in Poland, but also in other countries.