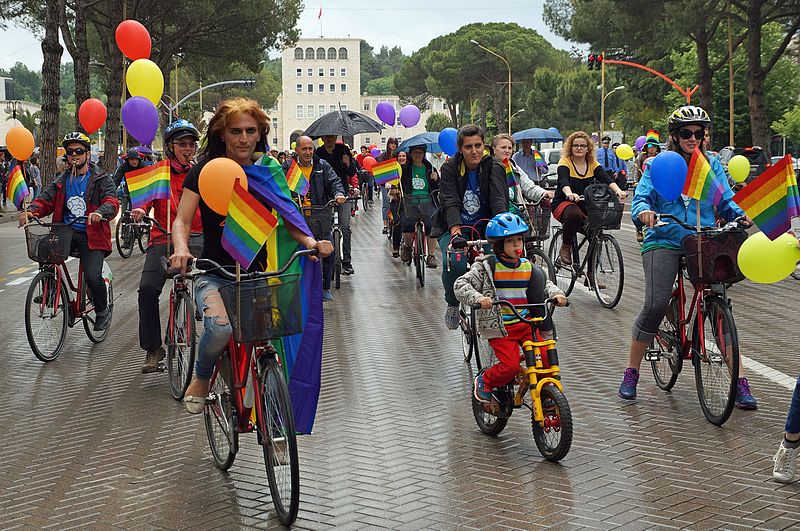 Want to spread your message of love and harmony through the streets for May 17, and get fit (and have fun) doing it? A bike ride could be a great way to do it !

In Albania, LGBT community groups held their first annual ‘Bike (P) Ride’, through the streets of the capital Tirana, for May 17, in 2012 – braving rain and attacks by opponents. The picture (above) is from 2013, and in 2014, the 3rd annual event took place – again braving the rain – with more than 120 people participating.

More than that, in 2014, activists in various countries also started to organise bike rides for the International Day Against Homophobia and Transphobia (Turkey, Peru, Bulgaria and Vietnam).

Not only is this sort of event free and fun, it can be a great alternative to a pride march or other public procession.

We asked Kristi Pinderi or Pro-LGBT in Albania, to explain a bit more about how they came to organise Tirana’s annual bike rides.

We did our first Gay Ride in May 2012. Please check out the video because it is very emotional (especially from 0.44):

It was 2012 and the LGBT movement in Albania was working underground and mostly on a volunteer basis since 2009. One of the young environmental activists in Tirana was trying to promote the use of bicycles in the capital and he had just began establishing some bicycle stations where everyone could rent a bicycle.

From our side, we thought it was the time to stand up and have a public event, a public demonstration of our right to feel free!

I remember this guy, who is now one of our biggest allies (Ened Mato from Ecovolis) said to us: why don’t you take the bicycles and just ride at the main boulevard?!

That guy was representing those hundreds of young people in Tirana fed up with the conventional ways of protesting. It was a great idea and we came together: LGBT, young people and environmental activists, and fed up young people, it was very encouraging for us to see other people not necessarily LGBT who were willing to help us.

The background of the momentum was that several of those involved in the emerging LGBT movement had just came out in their families. They were proud about this and they were all eager and excited about doing something in public. We were ideally some dozens of people ready to ride the bicycle : )

Earlier that week some of us were invited to the most important political show in Albania called “Opinion”, to face some very disturbing arguments about whether it is okay for Albania to have a Gay Pride Parade or not. That show attracted around 80 percent of the entire TV audience on one night, just some few days before we did the first Gay Ride.

We didn’t have even an idea of what to call it : ) We called it Riding against Homophobia, we didn’t even notice how similar Gay Ride was with Gay Pride : ) We just NEEDED to do something publicly, we needed the most important stage in order to feel, finally, free : )

But when the day came, we were shocked to find out that it was a day of heavy rain in Tirana : ) The first Ride was scheduled in afternoon, while during all the day we were just watching the weather outside our windows. We started to discuss either we should keep doing it or skip it because of the rain. I remember I had a phone call with Xheni Karaj from Aleanca LGBT who had managed to notify dozens of LGBT people and our supporters to come to the event and we were trying to make a decision: should we do it or not? Our biggest concern was that no one would dare to go out during that raining afternoon. But we said: well, we have faced and we still face every day much more difficult situations in our lives. The rain cannot stop us, it is the less problematic issue in our lives 🙂 We decided to take the bicycles and do it… And we did it 🙂

What were the risks/threats/obstacles involved and how did you deal with them? It is important to collaborate with the police in order to ensure the security of the people who are willing to ride. We had an incident during 2012 but that gave us more energy and increased our passion and adrenaline to keep riding : ) We had a less important incident in 2013 and we had no incident at all during 2014. We even took our bicycles and started to walk instead of riding at the boulevard. And we also showed a big LGBT flag, and of course nothing bad happened. We finally won the victory of feeling free to express ourselves. Because of the gay ride we did for three consecutive years, now the debate is not either we should have a Gay pride Parade or not (because everyone can notice that we are doing it since 2012. : )

If the stereotype of the gay pride parade was a concern to public opinion, now it is not a concern anymore, because we showed to anyone that their “frame” of imagination was wrong and that you can march and show your pride even with alternative “frames”. You need only two, three, four, five or even 80 motivated people who know how to ride a bicycle. And you need a car for those people who still don’t know how to ride a bicycle in order to help them follow the bicycles and feel the adrenaline. It takes always from 40 to 50 minutes to ride in our main boulevard : ) It is cost-less, you don’t need money to do that. It is free of charge : ) You might spend some money to call people, or if you want to have some t-shirts. But you don’t need to have a full staff working during the entire year for a 40 minutes Gay Ride. You can also spend some 200 US dollars for a website, or you can just skip that and create a blog for free : )

How do you rate the impact of this action, and how do you see its effects?

As I mentioned above, we deconstructed peacefully and without financial expenses the wrong phobia and “frame” and prejudices that people in Albania might have had about a Gay Pride Parade. They have been fed with 80’s and 90’s images and videos which do not necessary fit with the demands or priorities of local LGBT communities. Now, by the way, we can freely walk in the boulevard for a pride demonstration. No one would be violated, no one would be thrown stones at, or would be shoot, etc. : ) We don’t debate anymore in Albania about doing or not doing a Pride demonstration.

IT IS NOT IMPORTANT THE TOOL, BUT THE MESSAGE. YOU CAN ALWAYS INVENT THE TOOL, IF YOU DON’T HAVE IT. BUT YOU SHOULD STICK ON THE MESSAGE, REGARDLESS OF THE TOOL : )

Be creative and stick to the message not to the tool. The tool should be creative as well. If you don’t have a tool, think twice and think locally, it is there… Don’t copy and paste! Use your imagination, because it is fun : ) And don’t forget that public demonstrations are for the public, of course, but they should be for us, for our community first of all. These events should inspire us and only if we are inspired we can then inspire others.

Nothing else. Next year we might consider having young musicians with violins and guitars to play beautiful songs and music. We can stop the ride in the middle of the boulevard and listen to them peacefully, and avoid screaming and all the other standard noises of an aggressive protest. You can give the message through riding a bicycle, smiling, being happy and listening to a violin… That’s what we need : )