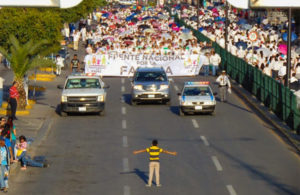 On Saturday, hundreds of thousands of people across Mexico marched to fight against same-sex marriage.

But one 12-year-old boy bravely stood up and said no.

The protests came after opponents of marriage equality said they would march to stop a proposal from President Enrique Peña Nieto to legalize same-sex marriage across the country.

Same-sex marriage is currently legal in 10 of 31 states.

National Front for the Family, a coalition of homophobic, religious and conservative groups, held banners calling ‘For Life and Family’ in an attempt to pass a constitutional ban on equal marriage.

And in one city, in Celaya, around 11,000 people are reported to have marched against equality.

As the crowd marched through the city, one 12-year-old boy hoped to stop it.

‘As first I thought the child was only playing,’ Manuel Rodriguez, a photo-journalist, told Regeneración. But even after the child was removed from the road, he asked him why he did it.

‘I have an uncle who is gay,’ the child said. ‘And I hate that people hate.’

On social media, many have compared the photo to the infamous Tank Man – the single unknown protestor who stopped the path of a column of tanks the morning after the Chinese military had suppressed the Tiananmen Square protests of 1989 by force.

The boy too also wished to remain anonymous.