Fighting for Acceptance – A story of liberation in Timor-Leste

Fighting for Acceptance – A story of liberation in Timor-Leste

Timor-Leste is a very young independent country, officially born in 2002 out of a separation with Indonesia. The LGBT movement there is nascent. The first LGBT group, the Codiva Foundation was founded in 2011 and is an umbrella organization of 10 different community based organizations.

The National Youth movement Hatutan has been including sexual and gender diversities as part of its focus to promote social inclusion.

Natalino, a member of the youth group Hatutan, attended a regional meeting of the ASEAN Sogi Caucus, a network of LGBT groups of the ASEAN countries. At this meeting, he got inspired by a presentation from PFLAG Vietnam. Family values sounded just like the focus that would “bring the issue of sexual and gender diversities home” in Timor Leste too.

Natalino tells us more about what happened next:

“I got back with the momentum and got a few people together and we decided on producing a short 15’ film that would talk about sexual and gender minorities in the country. That’s how the documentary “The road to acceptance” was born.

There was practically no public discussion about it in the country, and people didn’t know much about us beyond stereotypes.

The idea was to promote inspiring stories and to showcase supportive voices. Our ambition was to change the representations and fight stereotypes. We wanted to show that there could be successful LGBT people so the documentary focuses on an advisor to the President, a fashion designer, a program specialist, and the son of a freedom fighter.

Given the importance of family values, it was important to get family members to voice their support, especially from older brothers as they normally are the ones who enforce social norms in our patriarchal society. 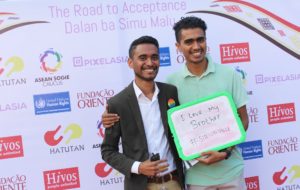 In Timor-Leste family is seen as a very wide network which can to a certain extent even include the church. This is why it was great for us to have a nun who agreed to be part of the video. 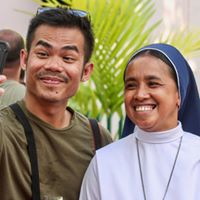 It was also important for us to have authoritative voices. Especially in a country that emerges from a liberation war, political leadership still shapes national values. We wanted respect and acceptance of sexual and gender minorities to be part of these values.

That’s how we got to contact the Prime Ministers office. Mr Rui Maria De Arauj is  known for his integrity and he is a church-going family man, who enjoys large popularity and respect; his support would definitely change the social climate.

We integrated much of the PM’s concerns about development, social inclusion and other issues into the declaration that we suggested he issues. He often used the slogan “no one left behind” so we definitely made this central to the declaration. We didn’t go for a very political declaration, nor did we advocate for specific measures. At this stage it was more important so secure moral support. We obviously must have done our job right as he agreed to our declaration and released it in a support video, which is now one of the main foundational moments of our movement! 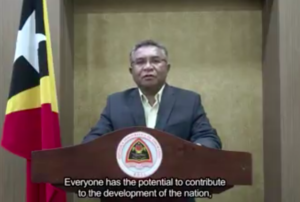 Listen to the PM’s speech with English subtitles

We also aimed at connecting our campaign to the national independence struggle. This might be surprising to some as an armed struggle normally talks about “patriarchal” values of strength, violence, aggression, etc. All values that don’t traditionally play into the narrative of promoting sexual and gender diversities. But as said before, our country is in its early years, when the national values are being defined, beyond the ones that were central to the liberation itself.

Lately, the role of activism in the liberation struggle got at last some recognition, in addition to the diplomatic and the military strategies. The role of women was particularly being recognized and we definitely wanted to surf on this trend.

Again, we were extremely successful on this, as Xanana Gusmão one of the founding fathers of our country, who led the liberation struggle and who was our first Head of State, attended the launch screening of the documentary in April 2018. Gusmao is our “Mandela” so you can imagine how his support mattered to us ! 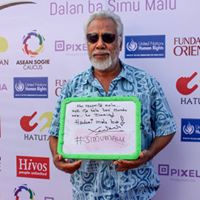 Overall, we feel this campaign has contributed to firmly root sexual and gender diversities within the scope of the Nation’s quest for equity and justice.

Sometimes we fear that the growing Homophobia and Transphobia in neighboring Indonesia will spill over on our public opinion, as there are many exchanges between the countries, but we are a mainly Christian country and therefore hopefully able to resist the influence of Islam-driven fundamentalism.

In any case, campaigning needs to continue. We live in a fast changing world and cannot afford to let our defenses down.”