On May 24, more than 360 same-sex couples rushed to the marriage registration offices across the country in tearful celebrations of joy.

Since May 17, coinciding with the International Day Against Homophobia, Transphobia and Biphobia, Taiwan had officially become the first country in Asia to legalise marriage equality.

The road to this historic moment was not easy and was fraught with vying political motivations.

This short documentary provides a nice historic overview of the context

Taiwan’s LGBT+ movement was birthed in the late 1980s, alongside the feminist movement, with first steps taken when Chi Chia-wei sparked a movement for marriage equality

But it wasn’t until 2000 that it gained mainstream traction when 14-year-old Ye Yong Zhi tragically died after being the subject of intense bullying about his sexuality. The widespread public outcry led to the Gender Equity Education Act and a more open and public discussion of LGBT+ rights. As a result, Taiwan’s younger generation were given the opportunity to learn about gender equality and the LGBT+ community. 80 percent of that generation now supports marriage equality. 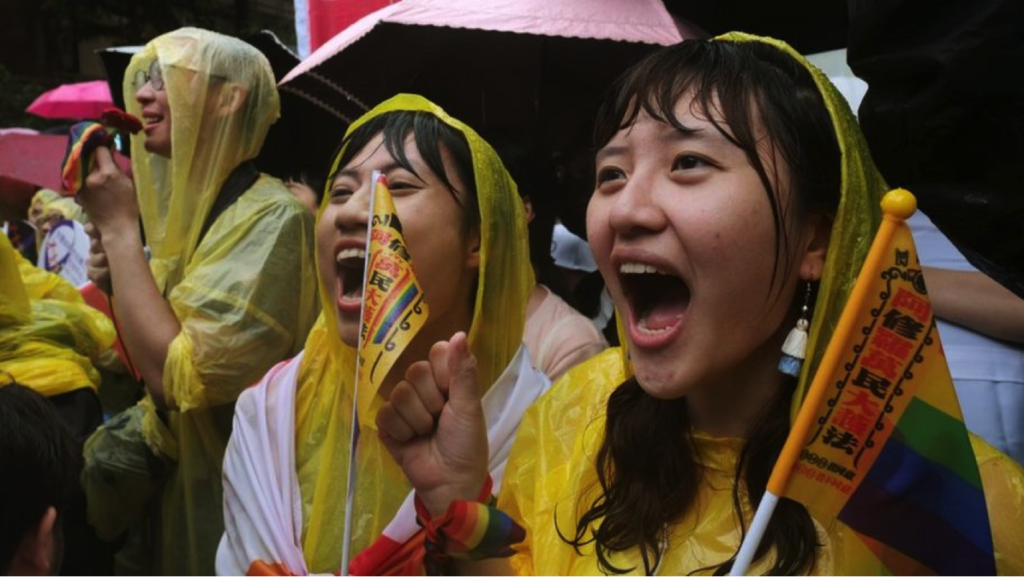 A draft of the marriage equality bill was first introduced in 2006. Democratic Progressive Party Legislator Hsiao Bi-Khim proposed a same-sex marriage law, but it does not pass the first reading. In 2013, the marriage equality bill was introduced by the Taiwan Alliance to Promote Partnership Rights and Legislator Cheng Li-Chun but was met with such fierce public criticism it didn’t go forward. Sadly, it took another death for there to be any momentum – this time it was Jacques Picoux, a French lecturer and LGBTQ+ activist who taught at National Taiwan University. He killed himself after he realised he had no right to make medical decisions on behalf of his cancer-stricken partner, Tseng Ching-chao, or any legal rights to the home they had shared for nearly 40 years.

Their tragic story once again ignited public debate over the LGBT+ community, with the Marriage Equality Coalition Taiwan and progressive legislator Yu Mei-nu seizing the moment to propose an amendment to the civil code to legalise equal marriage.

In 2017, the constitutional court ruled that the civil court had to recognise same-sex marriage and gave the legislature two years to pass a law that would grant Taiwan equal marriage.

Once again, there was a massive public outcry. A referendum was held in 2018 to decide if Taiwan wanted to go through with this reform. After a long and ugly campaign the referendum returned a resounding 72 percent “no” vote. 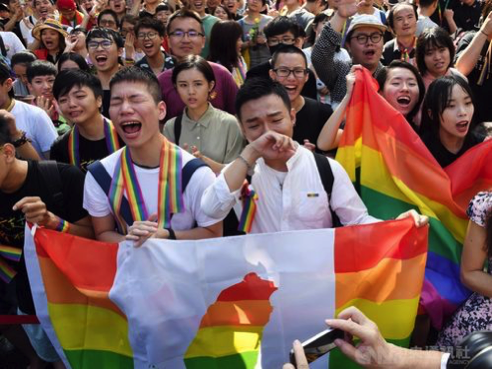 After the saddening results of the referendum, Taiwan’s Government with the support of the Democratic Progressive Party (DPP) decided not to amend the civil code and instead create a totally new bill that allows same-sex unions in the country to get married.

This bill included some restrictions over full marriage rights as it allows same-sex marriages only between Taiwanese, or with foreigners whose countries recognise same-sex marriage.
Furthermore, same-sex couples will only be allowed to adopt children biologically related to at least one of them.
“It’s still a compromise version (of what we wanted) but it’s the closest to our ideal expectations,” said Jennifer Lu, the chief coordinator of Marriage Equality Coalition Taiwan.

Two other bills, much less favorable, were tabled by the opposition. 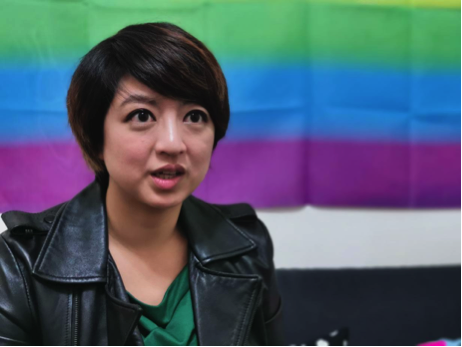 The vote on the 3 bills was scheduled on May 17, which is internationally known as the International Day Against Homophobia, Transphobia and Biphobia. This probably was an early signal that the ruling party would massively support its own proposal.

So, early on the morning of May 17, a huge crowded gathered outside Taiwan’s Legislative Yuan and waited in the rain until marriage equality was officially and finally granted.

In a strong article that recaptures the full history of the process Lu concludes “In the end, this hard-fought victory marks a new page in Taiwanese history — at least for the moment. Thanks to the courage of members of the LGBTQ+ community who stepped up, came out, shared their stories with families and friends, and helped the public to learn about the difficulties faced by the community, our right to marriage has finally been recognized.”

And indeed, this fight has not been an easy one.

The Marriage Equality Coalition Taiwan was established in 2016 with the aim to promote the passage of the marriage equality bill.

Signature campaigns, films and documentaries, photo exhibits, demonstrations, lobbying initiatives, pride parades, panel discussions, to name a few, were the amalgamation of a vibrant civil society that was determined to make love win

Among many interesting initiatives, 27 companies signed a statement in 2018 in support of LGBTQ rights in Taiwan. The same year, director Lucie Liu released a documentary entitled “Taipei Love” on the perceptions of homosexuality in Taiwanese society.

But the perspective of Marriage equality resolutely sparked an explosion of conservative opposition.
The referendum questions on gay rights were the subject of a well-funded and highly organized campaign led by conservative Christians and other groups. The campaign was characterized by misinformation, the bulk of which was spread online, including messages warning of an AIDS epidemic and low birthrates, or that educating students about different sexual orientations would influence their sexual orientation.
Some waved the threat that Taiwan—which offers universal health-care—would become a magnet for HIV-positive homosexual men, who would flock to the country and marry a Taiwanese man in order to use the health-care system.
Fear mongering around sexuality and children, which is almost universally used around the world by conservatives, has also been part of the arsenal in Taiwan, as Qz.com extensively reports on. 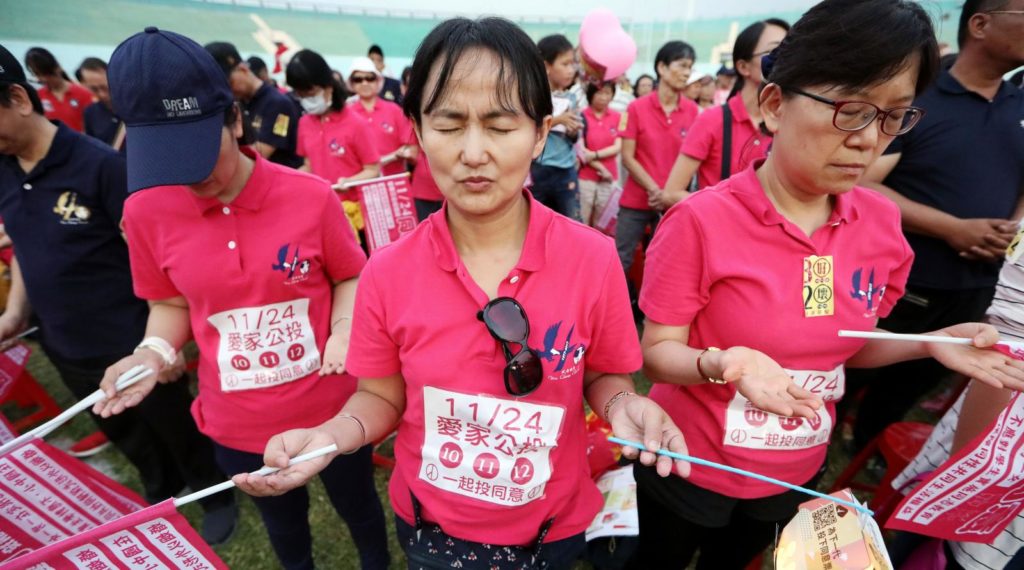 According to Benson Lee, spokesman for the organization Marriage Equality Coalition Taiwan, the volume of misinformation against Taiwan’s LGBT community has noticeably increased in the months ahead of the referendum

By and large, conservative attacks were mainly framed around the argument that same-sex marriage is un-Asian or that it violates long-held traditional family values, in Taiwan and beyond.

To counter this, Marriage Equality Coalition Taiwan early on centered its messages on the power of love, and the argument that equal marriage would strengthen social harmony, a very powerful frame in the Asian context. The pro-marriage coalition also sought support from traditional religions, for example by building a rainbow team to attend the Goddess Matsu Pilgrimage Procession one year. Matsu is a famous sea Goddess in Taiwan and her pilgrimage procession is a very big event in the middle and southern Taiwan. The rainbow team became big news.

Interestingly, Taiwan Premier Su Tseng-chang’s address to the nation on bringing in same-sex marriage strongly framed the case along the argument that people are « born this way »

In the run up to the referendum and to the Parliament vote, new creative initiatives flourished, like this initiative by young Taiwanese boys who wore skirts to school for a week to break gender stereotypes.

But according to some observers in many cases, progressive activists have found themselves outgunned on referendum issues because of the opposition’s superior resources : According to Newbloom magazine « perhaps referendum efforts simply return to some of the basic issues plaguing Taiwanese politics, to begin with—that those with significant resources at their disposal have a disproportionate ability to influence politics »

One thing is clear as of now among Taiwanese activists like Victoria Hsu, founder and executive director of the Taiwan Alliance to Promote Civil Partnership Rights, “we will just enjoy this victory for today, and continue our fight tomorrow. The recognition that there is still more work that needs to be done, essentially means that the campaign continues.” According to Ryan Chiu, a Taiwanese activist involved in the struggle, “the next steps for the rights groups’ goal now is to have same-sex couples finally to be included in the civil codes.»

Victoria sees that “the success of Taiwan has also brought fervor among the LGBT community of Hong Kong to also demand marriage equality rights. A victory in one part of the region will cascade influence and inspiration to other countries, and we will continue to follow the development of this movement in the country and the rise of new campaigns for marriage equality in other parts of Asia.”

So maybe the concluding words can be left to Taiwan’s Premier: “No matter whether you are gay or straight we are all here, between Heaven and Earth”