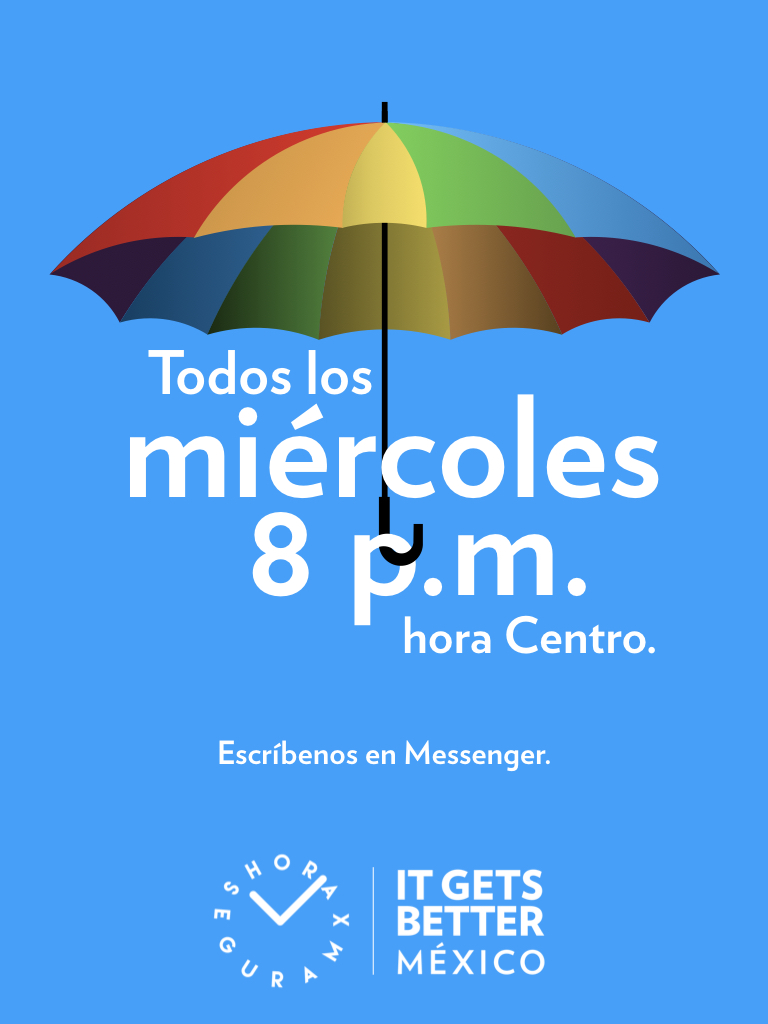 Safe Spaces makes it get better in Mexico

As in many places around the world, young LGBTQI+ people in Mexico are very vulnerable to social stigma and psychological or physical harassment. That is why a group of keen activists, led by Alex Orué, adopted the US campaign “It Gets Better” (IGB).

Back in 2014 we chose the 17th May, the International Day against Homophobia, Transphobia and Biphobia, to launch our organisation.

Using the well-known IGB concept, we collected stories and positive testimonies to support young LGBT+ people who feel stigmatised, discriminated or humiliated, and who find it hard to imagine a better future.

Our second objective was to build an online community bringing together LGBT+ youth who experience isolation either because they are in the closet, or they face a hostile environment at home or school. This goal was achieved through La Hora Segura,[1] an online program that offers a weekly service of psychological counselling.

For six years we have been a fully established volunteer organisation. Now, thanks to our fundraising activities with private companies over the past three years, we have the budget to fund four members of staff.

How do you collect the testimonies of support and stories?

We use videos because they have a greater impact on young people than other formats, particularly when they are released by support groups, companies or government agencies with institutional backing, or when they involve celebrities like those who supported us for the launch of the organization. Videos help to amplify messages and reach larger audiences.

La Hora Segura is targeted towards at-risk LGBT+ youth who are dealing with violence and self-harm or who may be contemplating suicide. Designed to “scale down” crisis situations, the program offers psychological counselling rather than therapy. Anyone who has reached a critical point can connect with La Hora Segura to access counselling and help finding more specialized support.

All of these young people have been traumatised by hate speech, especially online. A lot of this speech is illegal, although community and religious leaders often act as if they have a license to discriminate. Young people who lack support from networks and family can be particularly vulnerable to these attacks.

When we started the organisation, the need for mental health support soon became apparent. We found a professional psychiatrist who was keen to develop this sort of activity. It took us a couple of years to prepare the basis for the project. The United States Embassy in Mexico helped by putting us in touch with The Trevor Project. Trevor Project representatives brought some of their helpline team to Mexico City to train us and assist in laying the foundations of the program.

What channels do you use to reach the young people you work with as well as those who provide you with testimonies?

We had to carefully identify our channels so we didn’t need to contact parents and/or schools, so we concentrated on creating online spaces. Facebook initially supported us with coupons for paid reach.

In terms of outreach and visibility, national media is becoming increasingly ready to tell our stories and report on our communities in a more positive way so we can rely on them more. In contrast, local media is proving more difficult to reach and less open to our approaches. This is something we must all work on.

What is your communications strategy?

The strategy encapsulated by our name ‘It Gets Better’! Even though the situation might be complicated at the moment, this name sends out a message of hope. Some people might simply interpret it as “it’s all good, we made it”, but of course that’s not what it means.

We have very strict guidelines as to how to respond to online hate and everything that is negative, particularly when the suicide of a high-profile person or a hate crime makes the news. We always react in a constructive way without giving a direct response or using a similar hostile tone,. We know that we are speaking to an audience that is capable of listening. Our strategy is to focus on what our community can do to make the situation better and not to dwell on the negative.

In the current context we particularly want to highlight that the sense of isolation people experience due to COVID-19 is similar to that suffered by our community on a daily basis. Raising awareness of this helps other people to understand and empathise with the experience of LGBT+ childhood and adolescence.

Social conformity has a huge influence on the way people think. We tend to form opinions based on what (we believe) others think. Campaign communications should try to exploit this as much as possible. When the dominant social attitude is hostile, communications can focus either on a minority norm (“Cool people really don’t discriminate”) or focus on the direction of change (“More and more people support diversity”). The “It Gets Better” frame does just that.

People identify with your cause when they see a connection with their own lives. Marking the parallel between the lockdown imposed by COVID-19 and the “mental” lockdown experienced by LGBTQI+ people is a powerful tactic for creating much-needed empathy.