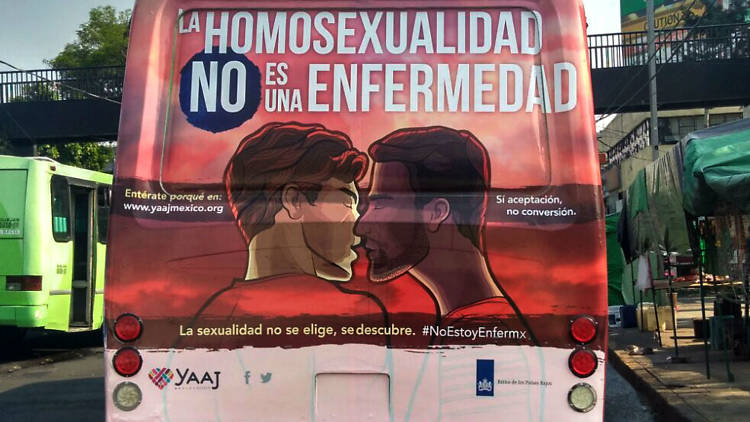 The name of Mexico’s LGBT+ Youth organisation “Yaaj” sounds like a rallying cry! The target they are after? The charlatanistic conservatives, backed by the Catholic Church, who advocate that same-sex attraction can be “cured”. Meet Ivan Tagle, their passionate Director.

Ivan, why did Yaaj choose this focus?

Yaaj, which actually is a Mayan word for « Love », works on various fronts. We work on political advocacy, research, emotional support and guidance for LGBT+ youth and their parents. We have a housing program for homeless youth.

It wasn’t everyone’s choice in the organisation to focus on conversion “therapies” but there is currently clearly a push from the alt-right for so-called “sexual orientation change efforts” (SOCE) which are know in Spanish as ECOSIG. Ultra conservatives are using prayers, starvation and rape as weapons against us, and young people are of course their priority targets because they are fragile and because their parents still have authority on them.

But for the first time in the history of Mexico we now have openly LGBT+ people in positions of power and decision-making, which makes it easier to advance our agenda.

The ruling party is divided on the attitudes towards LGBT+ people in general, and SOCE in particular, so we identified we had advocacy potential here.

How did you approach your lobby work to get a bill against ECOSIG into Congress?

Three years ago, Yaaj published a summary of various international references regarding “conversion therapy” that speak against it, in order to build a legal case. There was not a single document or clear references on the topic in Mexico, so we saw a clear opportunity for us to create one. We also edited a Guide for Mental Health Professionals: Nothing to Cure, which we launched in partnership with the United Nations Office on Drugs and Crime and the National Autonomous University of Mexico, to gain scientific and political authority.

And in addition to your lobby work, you started the “Nothing to Cure” (“Nada que Curar”) campaign.

Our campaigns are an integral part of the work towards ending “conversion therapies”. The first part of our strategy was to make the issue known to the public and explain that those “therapies” include practices that were cruel, degrading, and violated the human dignity.

We decided to launch messages on city buses and on social media with the hashtag #NoEstoyEnfermx (#’ImNotSick[1]) On social media, anyone could join the campaign. People were invited to post on their personal accounts a message about who they are and what they do, together with the hashtag. The objective was to show that LGBT+ people are everywhere, doing all kinds of things, working on all sorts of trades.

The visibility of the buses was specifically huge, and generated a lot of noise on social media. Ironically, it was inspired by a Spanish homophobic campaign that used this tactic. 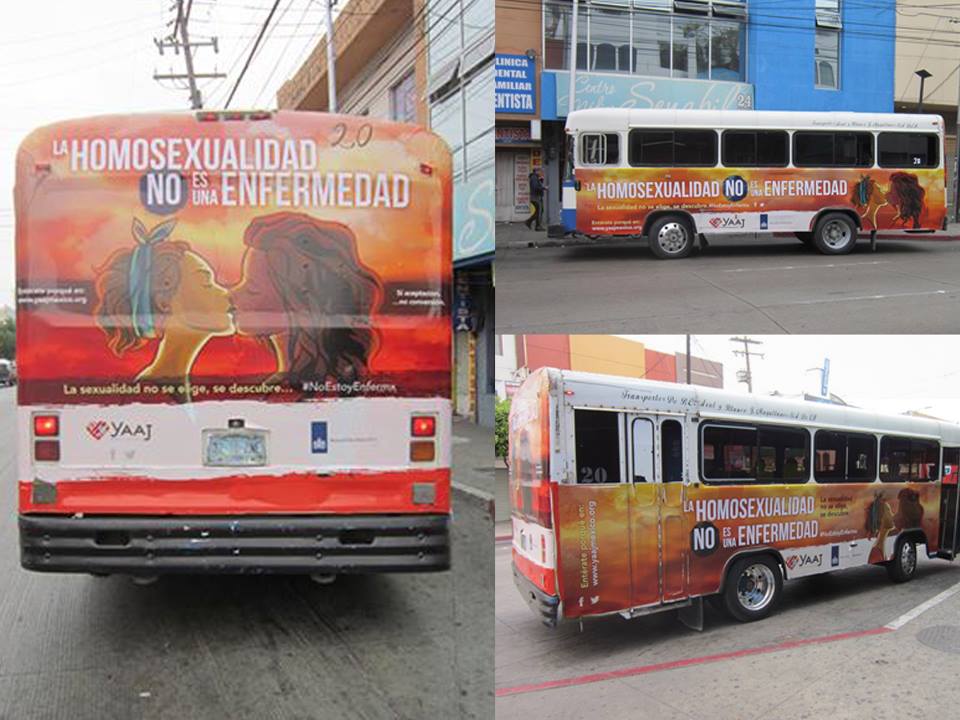 We also generated a lot of public attention with a “guerilla” action: overnight our volunteers painted a pedestrian crossing on one of the main streets in Mexico City centre in Rainbow colours.

We chose May 17, the International Day against Homophobia, Transphobia and Biphobia, as an obvious date to launch the campaign. The day is marked officially in Mexico, so it was important to take advantage of that. We have also taken advantage of the momentum generated by some “ex gay” spokesmen who are pushing for “conversion therapies”: whenever they would speak up, we would respond by putting out a press release or organizing an offline action, and thereby grow our message. 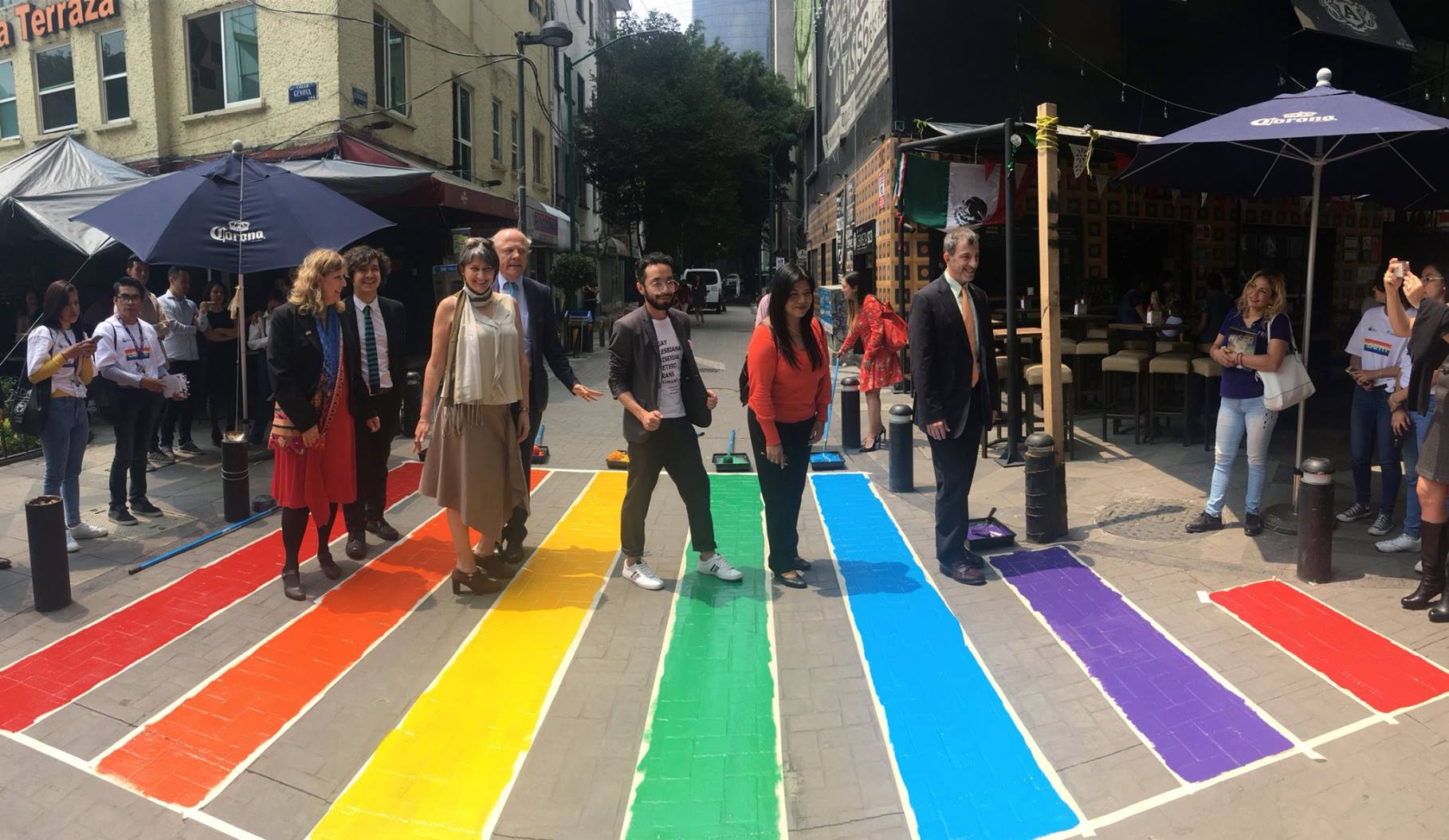 What were the essential frames and messages that you used?

We identified the need to stop legitimizing narratives that supported the belief that homosexuality is a disease. After days of discussion, we decided to go with the most basic message that would resonate with LGBT+ people: #NoEstoyEnfermx (I’m not sick).

We studied and analyzed conservative narratives that legitimize “conversion therapy” and all ECOSIG, so we started to build our counter-narrative from there, with help from Movimiento Frente al Discurso de Odio, GLAAD, and other communications experts.

We have had discussions around decisions such as to wether the #NoEstoyEnfermx hashtag could be stigmatizing for people living with HIV. We had to talk this through because decisions in our organisation are based on concensus. Not always easy, but essential for us.

How did the strategy to influence public ideas and attitudes include mobilising your existing communities, supporters and allies?

Most of the mobilization happened “organically”, via our support groups, group chats, Facebook groups, people we had previously helped… Yaaj has over time transformed from being a civil society organization to being more of a movement, and the organization allows us to run the administrative and financial part of it. And we also have a great group of volunteers, people who received support and help from us when they were younger; and who reciprocate with their knowledge and time now that they are older and have careers.

So what impact could you see?

As far as visibility is concerned this campaign has had huge benefits. The media has been generally more open to our issues in mainstream outlets, TV, and radio. Yaaj has become a reference at a national level. We are not running after the media anymore, it’s them that come to us.

In terms of policy, the city of Mexico just reformed the city’s Penal code to punish anyone who practices conversion therapies that use violent methods that threaten a person’s integrity. The reform is now in the Senate.

Nevertheless, Getting a bill to pass is not an easy job, so we must be patient. We have three years for the bill to pass in Mexico City and six years for the federal one. It’s important that we are flexible, creative, assertive and precise with our messages.

What advice would you give to people thinking about doing this work?

The worst thing you can do on a campaign is to just create material, post it, and leave it as that. A truly effective campaign entails being part of the discussion, arguing against conservative rhetoric, constantly responding to online comments, etc. That’s how you achieve a real impact on hearts and minds.

Interestingly, we have also learned that sometimes there is a point when in order for things to move forward politically, you have to be silent for a little while, so that the opponents don’t try to block the bill. So over the last 6 to 12 months, we have been less noisy when addressing legislators, and that has allowed for the bill to move forward to the next stages.

How can people contact you to find out more?

Sogicampaigns’ Highlights and Food for Thought

This advocacy campaign made clever use of an information gap on the specific issue of conversion therapy in Mexico and established its authority by compiling resources and publishing national health guidelines. Good research is fundamental when adressing the institutions, but also influencers and opinion leaders.

The mobilisation happened via a lot of spontaneous initiatives by our “base”. There is a lot to say in favor of moving from the “command and control” model, where the organisation decides on everything and ask supporters to implement, and a “distributed action” model where supporters are given the space to develop their own initiatives and actions.

The campaign engaged in a real dialogue with supporters, allies, but also opponents. It didn’t position itself as only lecturing others but ensured interaction with the audiences. This takes a lot of time and resources, but it dramatically increases the impact of the campaign on people.

There is a basic principle in campaigning that you should not repeat negative frames, as even disputing an idea eventually reinforces it in the minds of the audience. So is the message “I’m no sick” doing this? Some campaign experts might argue that a positive frame like “I’m healthy” might have had a different impact. But when a frame is very prominent in people’s mind, then disputing it might serve as a kind of “vaccine”. That’s called the “social inoculation theory”. You can learn more about this in lesson 9 of our free online course on campaigns communications and make your own mind up on this question.

[1] Translated as #I’m Not Sick. By spelling some words with an x at the end, you can make it word gender neutral, avoiding the Spanish masculine (ending in o) and feminine (ending in a).