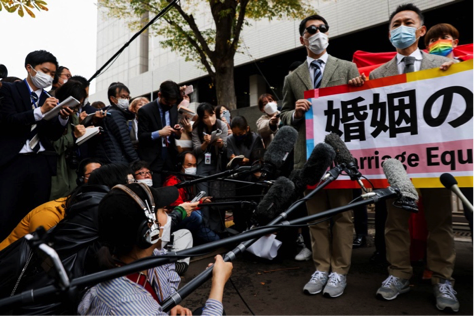 Japan is a relatively accepting nation. Historically, there are no sign of widespread persecutions of sexual and gender minorities, with some traditional expressions of a Cross-dressing culture 女形（onnagata) and even recognition of same-sex relationships 男色(Nansyoku）衆道（Syudo). The traditional religions of Japan, Shinto, Buddhism and Confucianism do not explicitly prohibit homosexuality and cross-dressing. Sodomy was briefly criminalised at the beginning of the Meiji era (Revised Criminal Act 1873).

However, only a few sexual assaults against minors were prosecuted and it was repealed in 1882.

Which is not to say that LGBTQI+ people’s lives are all pink. Imported Homophobia from western culture, together with social cultural norms that frown upon “deviations from normality” or from “traditional family values”, lead to a climate of hidden discrimination: Japanese society treats LGBTQI+ people as if they do not exist and mainstream society is not even aware that it is discriminating against LGBTQI+ people.

In this context, LGBTQI+ people are facing many challenges linked to their social and legal invisibility.

Among these, same-sex couples are confronted to particular obstacles :

Since same-sex partners are currently not recognised as spouses in Japan, the surviving partner does not have the right to any form of inheritance, including housing, unless explicitly stated in the partners’ will.

Same-sex partners may not be recognised as family at hospitals, and therefore are at risk of being excluded from life-or-death decisions, or refused to be recognised as the partner’s carer.

Even when raising children as a couple, one partner will not be able to be their legal parent.

If one partner is a foreign national the necessary residency status to live a stable life together in Japan will not be granted.

Advocacy towards securing the rights of same-sex couples started about a decade ago in an incremental approach, focusing initially on ordinances at local levels. 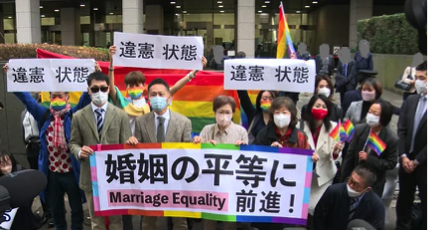 Partnerships and as of November 2022, 242 local governments had introduced ordinances or guidelines for same-sex partnership recognition and 3,456 couples had registered their relationships.

In 2019 already, with a conservative government that closed off the legislative route, and with a steadily growing basis of local ordinances, the time seemed right to get marriage equality through via the courts.

“Marriage For All Japan” was established in 2019 by volunteer lawyers and individuals who wanted to promote the realisation of marriage equality. Its strategy rests on 3 pillars:

1.Fully support the “Marriage For All” lawsuits ( judicial route )

Lawsuits to get full marriage equality began across Japan in 2019 to have the judiciary declare that banning same-sex couples from marrying in Japan is unconstitutional.

While Japanese courts have issued both positive and negative judgments regarding the legal protection of same-sex couples in a series of litigations, in a landmark victory for the Equality movement the Sapporo District Court ruled in March 2021 that not recognizing any legal effect of marriage at all for gay people is unconstitutional to that extent.

Most recently in November 2022, the Tokyo District Court upheld that the lack of legal protections for same-sex families violated their human rights. The Tokyo District Court stated that it is unconstitutional not to recognize the institution for homosexuals to become a family with their partners. However, it stated that it was not unconstitutional not to recognize marriage for same-sex couples because that institution could be any institution other than marriage

Plaintiffs talk to the media after hearing a ruling by the Tokyo District Court on same-sex marriage on Wednesday. | REUTERS

Both the Sapporo and Tokyo decisions allow the Diet wide legislative discretion and allow the Diet to establish a nonmarital institution for same-sex couples. Therefore, Marriage For All Japan and its allies are working to obtain rulings from other district courts, high courts, and the Supreme Court that the refusal to allow same-sex couples to marry is itself unconstitutional.

While the legislative route seems currently blocked by a conservative government with a 2/3 parliamentary majority, Marriage For All Japan still has put in place a creative strategy to slowly gnaw on the conservative foundations of the Diet (Congress): In order to increase the number of lawmakers who promote marriage equality, they held meetings with individual lawmakers as well as informational group meetings, and also held rallies at the Diet members building. Inspired by similar strategies by other social change movements and notably the movement to ban nuclear weapons, the organisation set up the “Marriage For All Diet Meter”, an application by which users can track the political position on this issue of each of the 713 Diet member and send them advocacy messages.

The website comes with an animation explainer video to facilitate its usage.

With a lot of the challenges for LGBTQI+ people rooted in social attitudes, achieving visibility and public acceptance is high up on the agenda of the Marriage Equality campaign.

With only 17,6% of the population thinking that same-sex relationships should never be accepted, Japan is a country where homophobia is not outspoken. But this comes at the price of invisibility : only 5,3% of Japanese in 2015 declared they knew a colleague, family member or close friend who is gay or lesbian (as compared to 75% in the USA). This figure drops to 1,8% regarding Trans people.

Marriage For All Japan’s public advocacy strategy focused initially on gaining sympathy from the moveable middle, by focusing public communications on the issues that LGBTQ people are facing in Japan. But recognizing that sympathy alone is not enough to get people involved, the organization recognizes that the connection to people also needs to mobilise values that have a strong resonance in the Japanese culture.

In a move to center the conversation also on the values of harmony, mutual responsibility, and general high moral standards, Marriage For All Japan found a perfect campaigning opportunity in investing the “Good Spouses Day”, celebrated on November 22. This typically Japanese event* focuses on harmony in the household and became a perfect moment to advocate for Marriage Equality within that frame.

In addition, campaigning initiatives ranged from appearing at Rainbow Pride events across the country to hosting same-sex marriage themed film festivals, or releasing a mini-documentary series on sexual minorities and their families. 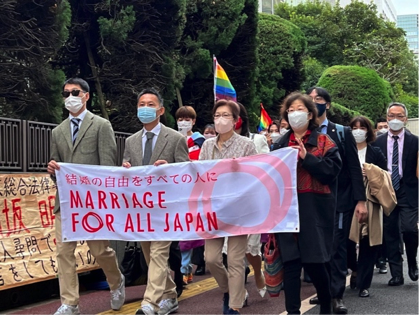 Between 2015 and 2022, thanks to the active campaigning of LGBTQI+ groups and their allies, public support for marriage equality rose from 41% to 65%. Maybe even more significantly, opposition shrank from 37 to 22%, meaning that the moveable middle segment became significantly smaller, shrinking from 22 to 13%.

* Other countries celebrate similar events, but on a different date.

In addition to these strategies, Marriage For All Japan has also been busy involving companies in their advocacy. Together with NPO Lawyers Network for LGBT and Allies Network (LLAN), and Nijiiro Diversity, Marriage For All Japan operates the “Business for Marriage Equality” initiative which seeks to gain the support of companies for marriage equality, mostly focusing on the positive impact that the recognition of same-sex spouses would have on the economy.

As of the end of this year, 337 companies have officially registered their support, including global giants like Sony or Coca-Cola or AXA.

How this support can translate into concrete political weight is now the challenge that the coalition is facing. But securing the moral support of a large segment of the economy is in itself of significant importance as we could recently witness with the importance of the business case in the decriminalisation process of same-sex conduct in Singapore.

One nail at a time, Marriage For All Japan is on its way to building a more equitable and harmonious future for all.