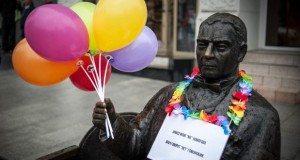 It is okay if you don’t live where the Statue of Liberty, Manneken Pis, the Thinker, Christ the Redeemer or the Tutankhamun are! All you need to do is to look around and see the statue that matters to your city or country. You will find your own Little Mermaid, Molly Malone… Statues of public figures, fairytale characters, myths, poets and writers are placed in city centres or parks where a lot of people pass by everyday. But what if one day people wake up to a different statue? A statue dressed up? A statue with a message? A statue hosting a picnic party for the LGBT community? They will definitely take notice!

This is also a totally low cost action, which could be done even just by one person. The images shared online are still just as impactful, as it’s the visual message that matters.

All you need to do is start looking for your favourite statue in your town or city!

For IDAHOT 2014, Polish LGBT rights group the Equality Factory chose this action, as a way of highlighting their city’s long history of cultural diversity and tolerance – saying that if cultural heroes were alive today, they would be against homophobia. “If Tuwim Lived Today, He’d Be Against Homophobia”
Famous Polish poet, Julian Tuwim, affirms
his support for LGBT rights. May 17, 2014

In the lead up to the day, they explained:

‘This year, Polish LGBT community faces a big challenge – we have become victims of an all-out assault by hierarchs of Polish clergy and neofacist groups, who would like to see us silenced and started to “guard” people against “gender ideology”. The great figures of the city, as well as common citizens will speak out against this strategy to legitimize hate and to silence LGBT community, as well as against hate itself.

Łódź is a city born out of diversity and tolerance – it stems from four different cultures. To underline this fact, on 16.05 the statues standing in the city, preserving the memory of great city patrons, will be decorated with rainbows of flowers and balloons, with mottos speaking out against hate attached.’

And in Ireland too… For May 17, 2013, LGBTQI youth group ‘Shout Galway’ organised a similar action – making their city’s statue of Oscar Wilde a proper queer icon today, by dressing him in the colours of the rainbow flag (and doing a rainbow chalk-in action next to it too). 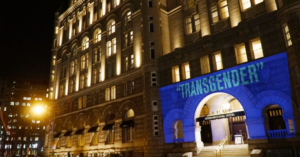 The news that the Trump administration had banned a list of words from budget documents, including words such as ‘transgender’ ‘diversity’ and ‘evidence-based’ inspired campaigners to use Trumpbranded buildings as a canvas for their tactic. In response the Human Rights Campaign sent a reminder that as a community LGBTQ people will not be erased and projected the banned words on iconic buildings. Projection can be a useful tactic as it doesn’t leave any damage to iconic buildings but can really help to draw attention to your message in a creative way. It’s been used by campaigners in many cities. More info on this action HERE

For IDAHOTB, many activists have managed to get very iconic buildings lit up in Rainbow Colors. Read more about this HERE