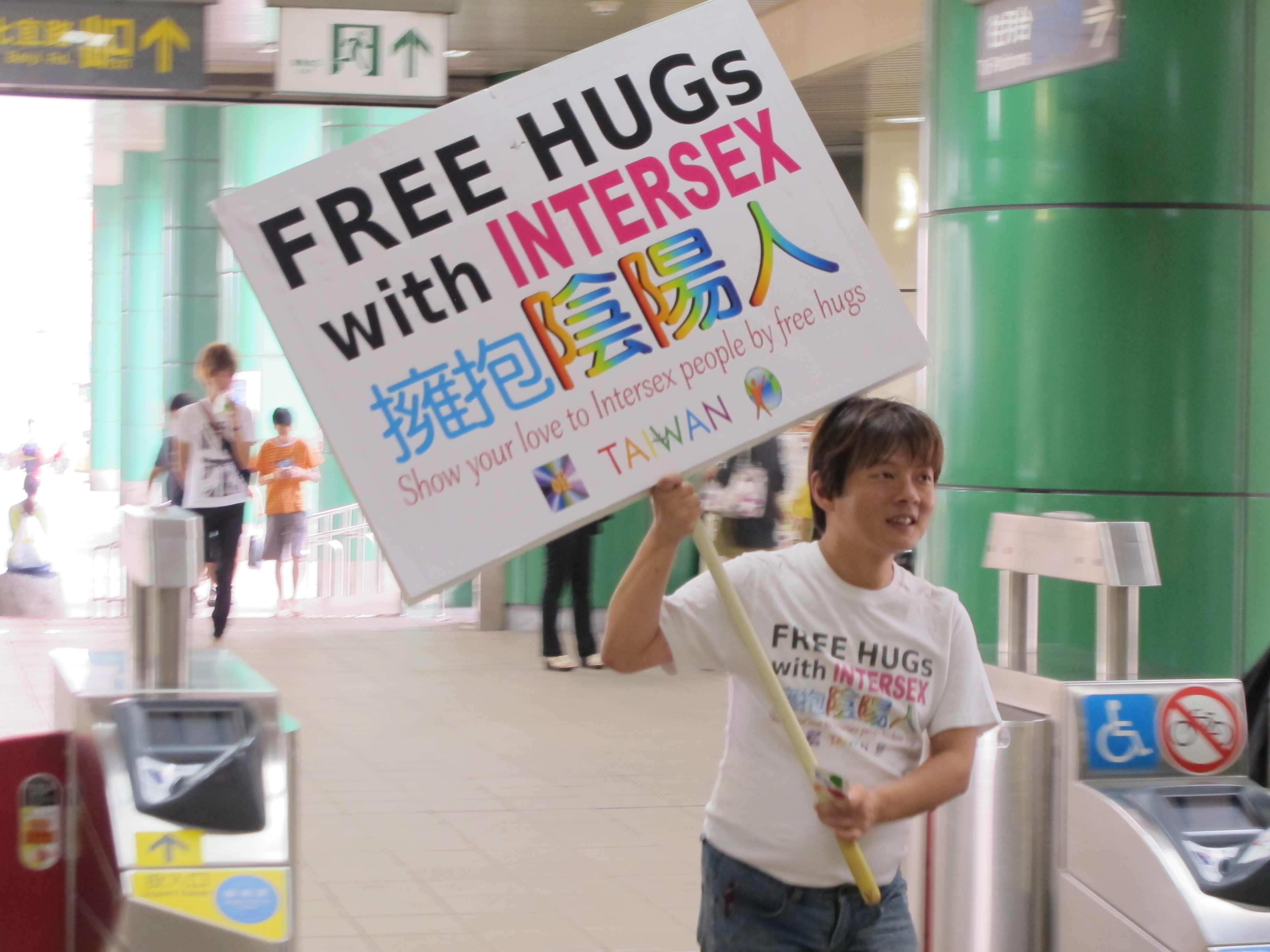 A Hug a Day Keeps Hate Away – Free hugging in Taiwan

The Global Free Hugs with Intersex Movement: An Invitation to Show Love to Intersex People (Taiwan)

Sogicampaigns talk to Taiwanese Intersex Activist and Co-Chair of Intersex Asia, Hiker Chiu, who initiated the Global Free Hugs with Intersex Movement in 2010 with the main idea of inviting people to show love to intersex people. After the eight-year campaign, success came when in October 2018, Taiwan’s Ministry of Healthcare and Welfare issued a recommendation directed to medical professionals to avoid any form of surgery to intersex children below the age of 12 unless there is a valid medical reason to do so, such as cancer risks or physical dysfunction.

But as Hiker puts it “changes in laws are only as good as the real changes in people are. If people don’t change, laws are useless. It’s all about changing people first”

A journey starts with the self

Hiker’s story began with their own medical diagnosis as an intersex person. Like many similar stories, Hiker felt like it was important to start awareness raising about what it means to be intersex at that time. In conservative Taiwan, people thought that being intersex is a mistake or a biological anomaly but Hiker was determined to change hearts and minds.

It started with a website that was anonymously managed by Hiker under pseudonyms and complete secrecy fearing that this might also lead to discrimination. However, this secrecy was not good to get other people to come out. After some time, Hiker was still the only person out there, feeling frustrated not to be able to meet other intersex individuals in Taiwan and across other parts of Chinese-speaking Asia. Hiker was not new to the LGBTIQ movement, however, because before leading OII-Chinese and Intersex Asia they identified as lesbian and joined the existing lesbian movement in Taiwan. That was only the start of this long journey of discovery and self-acceptance.

A trip to the US

A change of heart happened when Hiker was invited to visit other intersex activists in the US. During this trip, they met with several activists in different States and realized just how important personal visibility was.

So back in Taipei, Hiker went for the “big jump” and came out publicly during Taipei Pride Parade. Standing in the middle of the crowd, he was holding a Free Hugs sign, inviting passersby to show a sign of love.

“When I was in the US, people I met would give me these long warm hugs and they felt so good and empowering. I wanted to share this feeling of human warmth, which is what we all seek. I wasn’t sure this would work in Taiwan, where the culture is different. But a friend of mine told me about a gay man living with HIV in Australia who was doing a free hug action to fight stigma linked to HIV and got very positive support, so this ignited my passion to move this campaign forward. The reaction of the public was even better than I expected.”

Free hugs: the medium is the message

And that’s what Free Hugs is: Standing there, alone and exposed, is definitely an act of courage. Hugging is a simple, non-threatening, sign of love that everyone can feel comfortable with. And by inviting people to act voluntarily, without proactively going for them, you show them the respect and the consideration that you ask in return.

This is why the Free Hugs tactic is so powerful.

After thousands of pictures taken with people who support the movement (by giving a hug of support), the movement has raised intersex awareness and visibility in a positive way. According to Hiker, “I always said that intersex people are human beings as well, we need love and to be loved like everybody else. It brought me intersex contacts from all over the world, mostly from China. It empowers many intersex people and inspires the general public, opens their eyes to a new perspective of human sexuality”.

Hiker prefers the ‘Life Story Sharing’ campaign strategy for their movement. A Facebook group was also put up to connect individuals from different parts of Asia. Hiker uses the free hugs strategy to give out the message of love and respect. These hugs are, of course, freely given and with the utmost respect for the person’s space and body. The campaign has provided the Taiwanese public a sense of admiration and the opportunity to learn and connect with the intersex community in the most heartfelt way possible, hugging.

Taking it one hug at a time

Since then, Hiker continues to share their personal life story during lectures in schools (mostly universities). There has been unwavering positive support for them across many platforms, even reaching the United States of America in 2016. As Hiker recounts, “It was a surprise for me because after I came out, I got lots of TV news interviews. This exposure and my campaign made people aware of being intersex.” 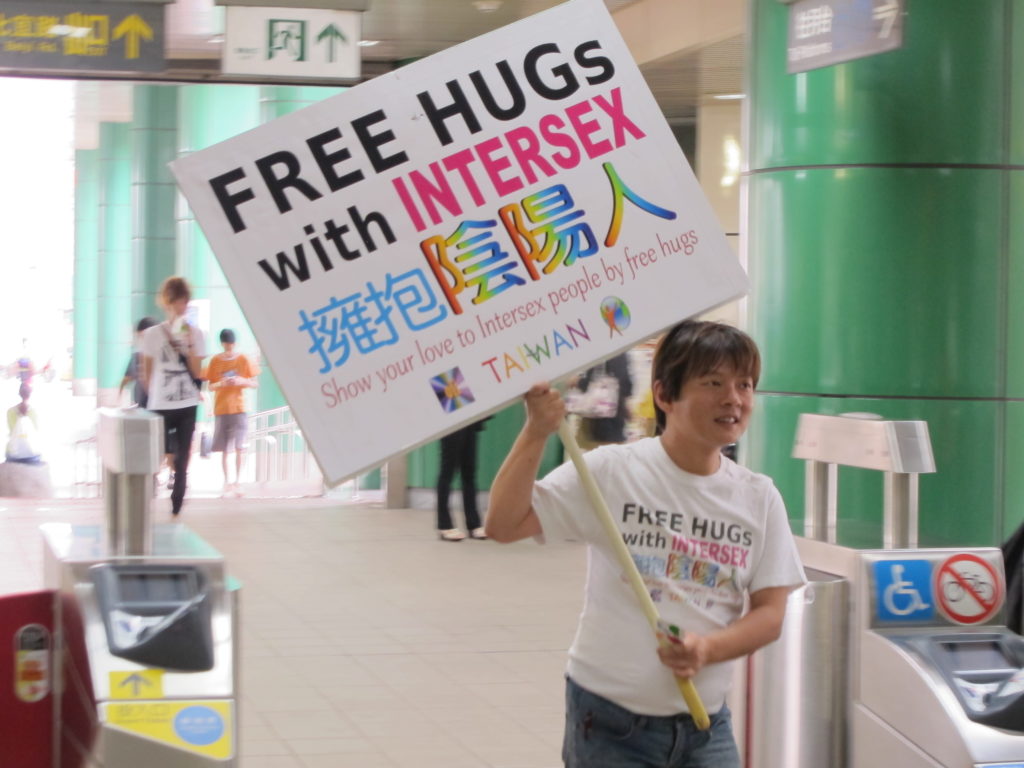 With this much exposure and opportunities to educate the public about being intersex, Hiker took advantage of the “Gender Equality Education Act” in Taiwan. It mandates that every school has the obligation to provide lectures on gender equality. This is how they got the opportunity to share their story and as Hiker puts it, “helped young people accept intersex persons and other LGBTQ identities by telling them that biological characteristic is also a spectrum.”

So what next? “The objective now is to go outside of Taipei and into the smaller cities, where attitudes are still 20 years behind what they are in Taipei. We will keep true to our values: respect for people, being gentle and sincere, and telling our true story. These are our keys to the hearts and minds of people out there”.

Note on pronouns: Do you feel using they as a person’s pronouns is grammatically wrong?

“It’s only an expression for you to pay attention to the diversity of human beings. Some intersex people do use “they”, some don’t. I don’t mind using any pronouns. Don’t worry to call me a wrong pronouns, everything is OK for me.”