Invert the logic : A Cure for Homophobia

In many contexts, having a sexual orientation or a gender identity that does not conform to mainstream norms is considered a mental health issue, despite WHO declassifying homosexuality as such back in 1990.

To mock that belief, a powerful strategy is to revert that argument and expose Homophobia and Transphobia as the real issues.

“Homosexuality is not an illness, homophobia is” is an often heard slogan.

To take this argument further, a good direction for action is to propose a CURE and to stage this in various ways. Activists in Croatia lobbying their national government known for its homophobic statements have used this approach to deliver to each Government minister on the IDAHOT a specific mock medical certificate, where all of his/her ‘symptoms’ were identified. These ‘symptoms’ were a compilation of all the homophobic remarks they had made, or the absence of support statements when they were asked for. It also included all the support given to notoriously homophobic groups, such as religious fundamentalist groups.

A PRESCRIPTION AGAINST HOMOPHOBIA

These “examinations” were accompanied with an individualized “prescription” to cure each minister from their homophobia. Prescription included wordings like “one pill of open mindedness before each meal” ; “two tablespoons of tolerance to diversity when symptoms appear”, “two anti-dogma injections each morning”

The action allowed not only to ridicule the government but also to mainstream the underlying causes of homophobia: ignorance, intolerance, censorship of critical thinking, etc.

The activists, dressed as doctors, delivered the “prescriptions” directly to each Minister as they were exiting the government building after a meeting, in presence of so much press that the ministers could not escape from the ‘confrontation’.

This format of action can be replicated with many different targets. Homophobic medical authorities could be a particular good focus, as the prescription from false doctors would also be a way to question the competence of the formal authorities.

WEAR IT ON YOUR SLEEVE

When a Brazilian judge ruled that gay ‘cures’ could be allowed, there were widespread protests and it became international news. This t-shirt was made in solidarity with Brazilian protesters and sent out a simple message that being gay is not an illness to be cured. The shirt says “Cura Gay,” which means “Gay Cure.” The “Cura” on the shirt is crossed out to signify that you cannot “cure” homosexuality — nor does it need to be cured. MORE INFO 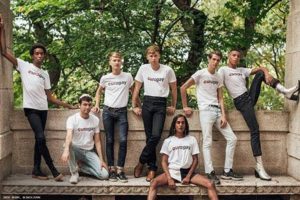