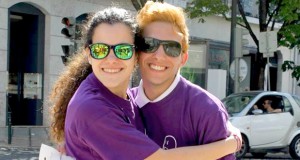 Who doesn’t want a free hug?! And what better way to spread the love – and the message of love! – than by hugging the people around us? This is a totally low, or no, cost action as well. Hugs are free, like the best things in life!

Since 2010, Portuguese LGBT rights group, rede ex aequo, has been organising ‘Free Hugs’ events for IDAHOT. They told us a little bit more about where the idea came from, how they organised, and what the impact has been. The first time rede ex aequo did an action on IDAHOT was in 2010. The idea was to go to a public space and bring visibility towards the discrimination LGBT people are facing, and through a simple gift – a free hug – accompanied by a bag with info on the day and data on discrimination and souvenirs, the people on the street would be engaged and informed, and by hugging people they would develop empathy towards the other.

The biggest obstacles lay in the permission of the Municipal authorities to hold the action in the public space, and getting media coverage in order to achieve higher visibility.

How did you get it done? How many people did it involve? What were the tactics that you used?

We had a member of the board entirely devoted to the event (free hugs). It was necessary to get the Municipality’s permission to use the public space, to produce the souvenirs and t-shirts (including the design), contact famous people (in order to get more visibility), coordinate volunteers, and publicise the event. Celebrities were invited to join the action for May 17, 2014 – giving free hugs to passersby

For the conference (in 2014), it was organised in partnership with the National Youth Council, so our contribution was mainly in the draft of the program and the choice of the guest speakers. And of course, advertising the event.

The action had a great impact. More than 200 people hugged, and we had media coverage (1 TV channel, 3 newspapers)

What advice would you give to others who’d like to undertake this activity?

Just do it. It takes some planning, and some effort. But if you can get volunteers, it is feasible.

We are planning to do it next year. We will do it later in the afternoon (it was too hot). We’ll plan a little bit earlier in the year. And we will try to integrate the action with other actions in the same day.

Photos from Free Hugs for IDAHOT 2014 in Lisbon